After Joe Alwyn eagerly announced his excitement to be part of ‘Conversations With Friends,’ his longtime girlfriend – Taylor Swift – showed her support in the slyest of ways.

“ ‘Conversations With Friends’ is one of my favourite books of the last few years,” actor Joe Alwyn, 29, captioned the Feb. 17 Instagram post that announced his involvement in the Hulu and BBC Three television adaptation of Sally Rooney’s 2017 novel. “I’m so grateful and excited to be invited onboard, and to get to work with this amazingly talented group of people,” added Joe, and the announcement earned some love from his longtime partner, Taylor Swift. The 31-year-old songstress was one of the 49,000 (and counting!) “Likes” on the post, a subtle display of affection from Taylor to Joe.

Though Swift has a reputation for putting her love life out in the world and into her music, her relationship with Joe has bucked the trend. She and The Favourite star have kept their romance private, which they decided after they first began dating in 2016. “I … was falling in love with someone who had a wonderfully normal, balanced life,” Taylor said in her 2020 documentary Miss Americana. “We decided together we wanted our relationship to be private. Even though it [Taylor’s public image in 2016] was really horrible, I was happy. But I wasn’t happy in the way I was trained to be happy. It was happiness without anyone else’s input. We were just, happy.” 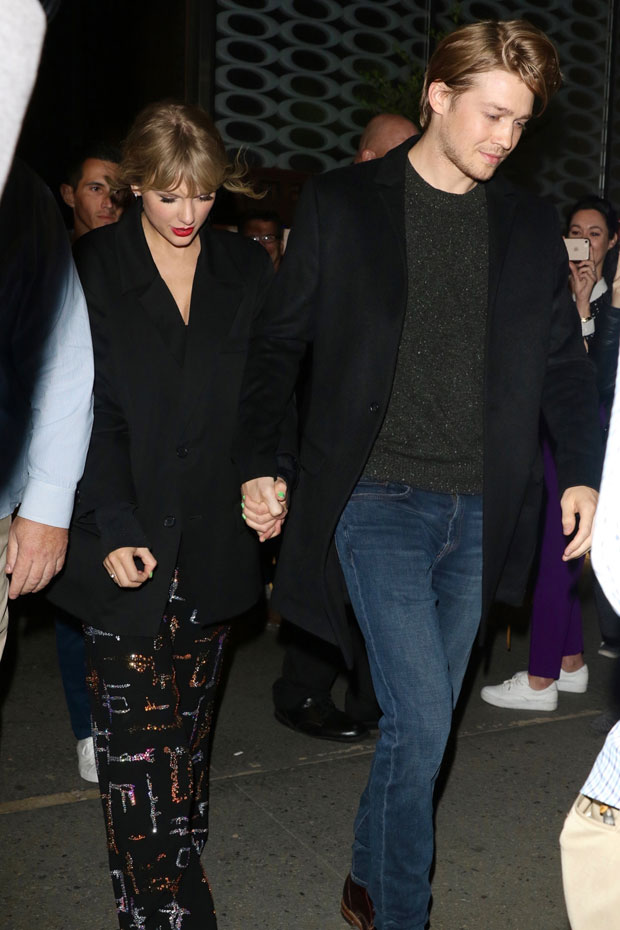 Though Taylor and Joe’s relationship is different in how it shuns the spotlight, the love has — like her previous affairs — resulted in music. But, instead of Taylor using heartache as inspiration for another classic track, she has found that her boyfriend is a pretty good songwriter. Joe collaborated with Taylor on a few tracks from her 2020 release, folklore and evermore. “I say it was a surprise that we started writing together, but in a way, it wasn’t,” Taylor said in a December interview with Apple Music’s Zane Lowe. “Because we always bonded over music and had the same musical tastes.”

“He’s always the person showing me songs by artists, and then they become my favorite songs,” she added. “Joe and I really love sad songs! We’ve always bonded over music. We just really like sad songs, what can I say?”

Expect Taylor to happily watch Joe when he appears in Conversations With Friends. The series, according to The Hollywood Reporter, will follow “Frances (Alison Oliver), a 21-year-old college student, as she navigates a series of relationships that force her to confront her own vulnerabilities for the first time. Frances is observant, cerebral, and sharp. Her ex-girlfriend, now best friend, Bobbi (Sasha Lane), is self-assured, outspoken, and compelling. Though they broke up three years ago, Frances and Bobbi are virtually inseparable and perform spoken word poetry together in Dublin. It’s at one of their shows that they meet Melissa (Jemima Kirke), an older writer who is fascinated by the pair. Bobbi and Frances start to spend time with Melissa and her husband, Nick (Alwyn), a handsome but reserved actor.”