Teddi Mellencamp, 40, of RHOBH dazzles on the red carpet at the MTV Awards… one month after getting neck surgery to remove sagging skin

On Sunday evening the 40-year-old TV star was seen at the MTV Movie & TV Awards – where her pals Kyle Richards and Erika Jayne were also spied – as she dazzled in a pink mini dress.

It has been one month since the beauty went under the knife because she said she was ‘insecure’ about some extra skin under her neck. 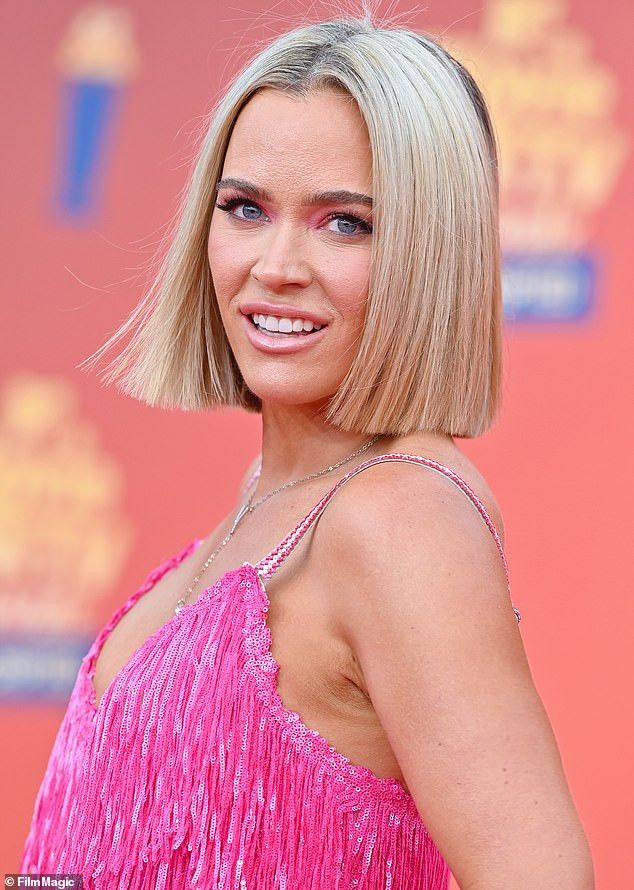 She is back: Teddi Mellencamp of RHOBH fame was seen on the red carpet this weekend; it has been a month since she had her neck lift 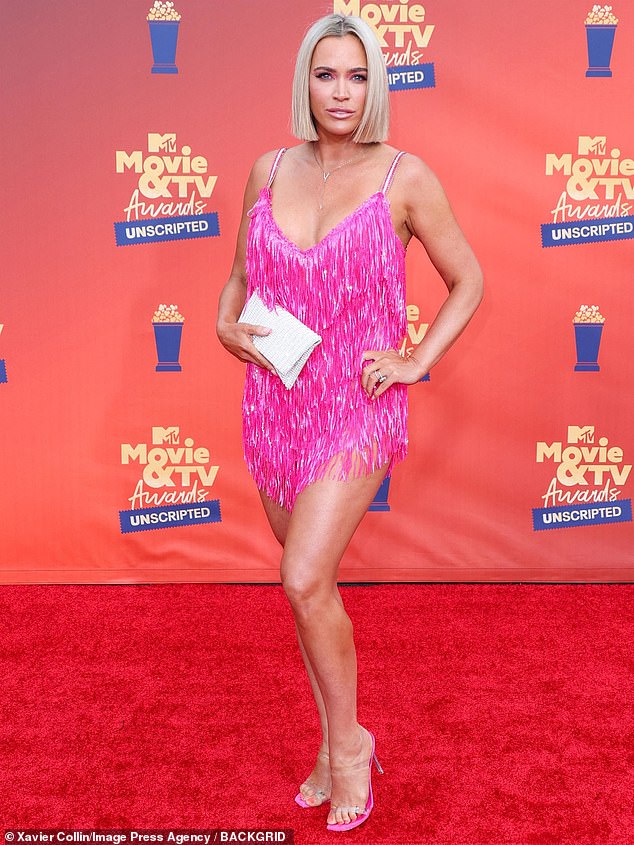 Back in action: On Sunday evening the 40-year-old TV star was seen at the MTV Movie & TV Awards

She has been wearing a chin brace ever since, but not on the carpet.

Teddi looked fit in her little candy pink dress that shimmered as she moved. The star added high heels with a pink sole and Perspex straps.

Her legs looked toned and tanned and has bare arms sculpted. And the star carried a white clutch purse.

She wore her hair stick straight and down in a classic bob as she added pink makeup. 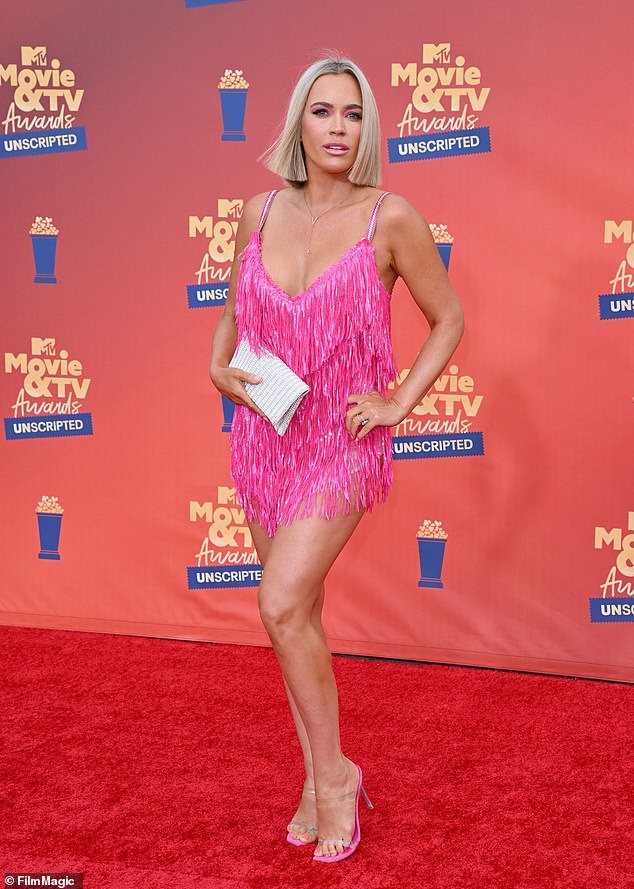 Stylish: Teddi looked fit in her little candy pink dress that shimmered as she moved. The star added high heels with a pink sole and Perspex straps

Teddi revealed on social media in May that she recently had a neck lift because she felt ‘insecure’ with how she appeared in profile.

The also said that she was healing nicely with little bruising as she showed post-op images of her scar.

But it was not long before trolls criticized her for getting plastic surgery, forcing the Real Housewives Of Beverly Hills star to defend going under the knife. 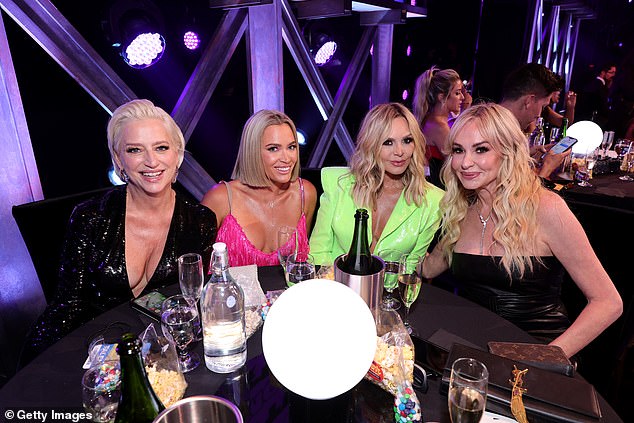 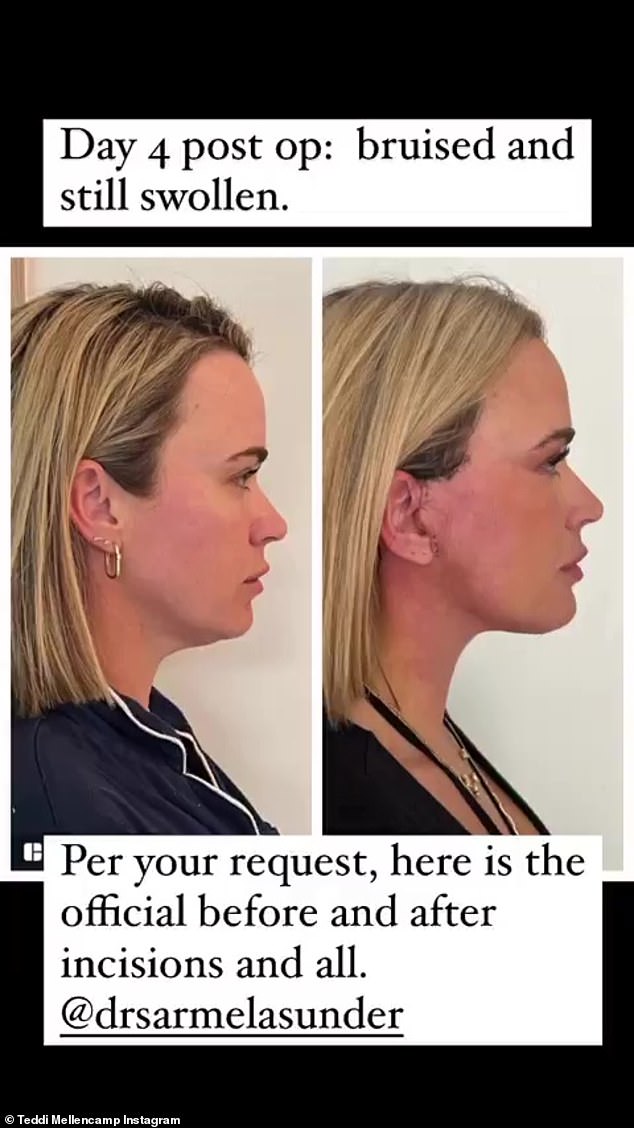 Post-op:  Mellencamp revealed on social media in May that she had a neck lift because she felt ‘insecure’ with how she looked in profile

One angry person shared, ‘Ur a public figure trying to help women loose weight yet your getting a face lift to remind those of us who need one who can’t afford one how ugly we are Thanku.’

Teddi responded by saying it is better that she is being honest with her fans.

‘I am being transparent with my journey,’ Mellencamp said.

‘Would you prefer I lie and pretend the loose skin on my neck disappeared? That’s not who I am. You want to only follow people that show themselves through a filtered version of themselves then I am not the person to follow.’ 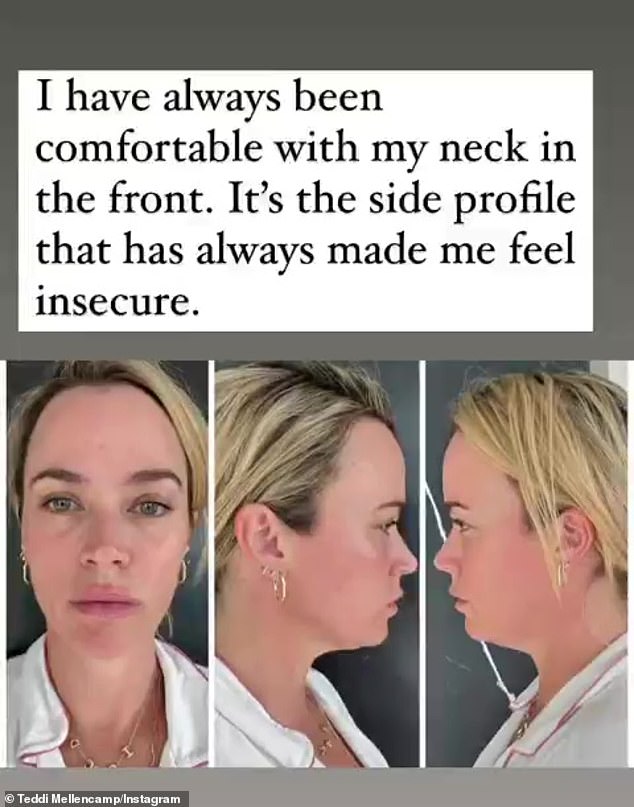 This is why she got the work done: The mother of three said there was fat below her chin and she gave photo evidence of it

The daughter of crooner John Mellencamp and Victoria Granucci said that she changed her life seven years ago by being healthier which helped her loose weight.

And she has been more than happy to motivate others to get healthy.

But she argued that she is still sharing her journey, which includes her admission that she had plastic surgery.

The star feels she should be given props for being honest about all her changes and not criticism.

‘Do you appreciate me being open about my journey or would you rather I just pretend I did nothing?’ she asked. 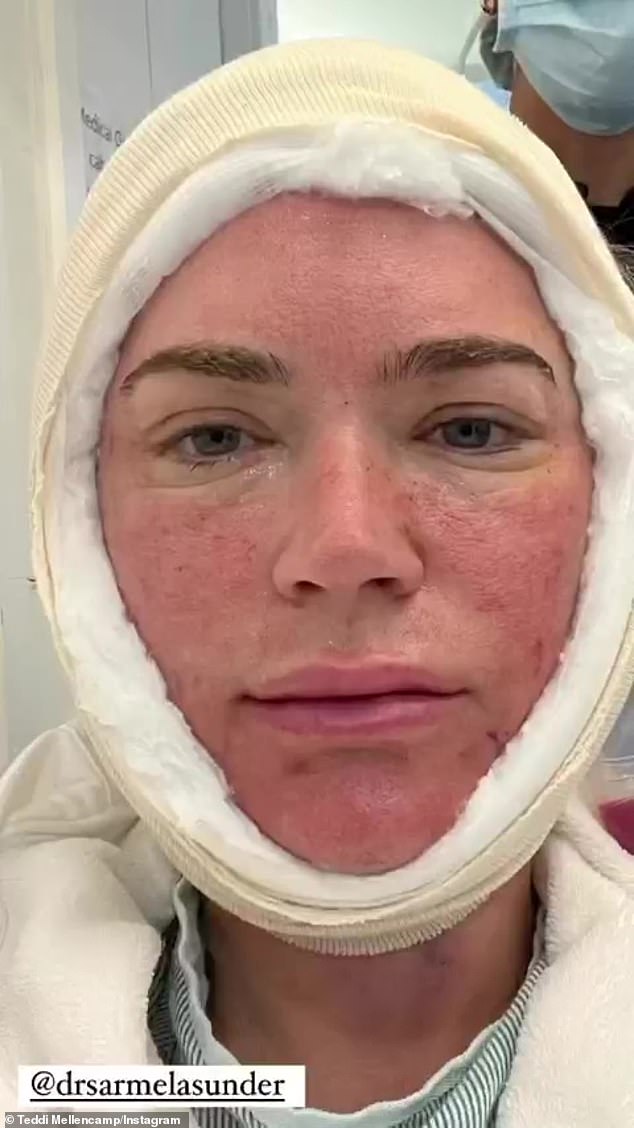 Sharing a lot: One image saw her still in the hospital with a large bandage around her head as her face was bloated 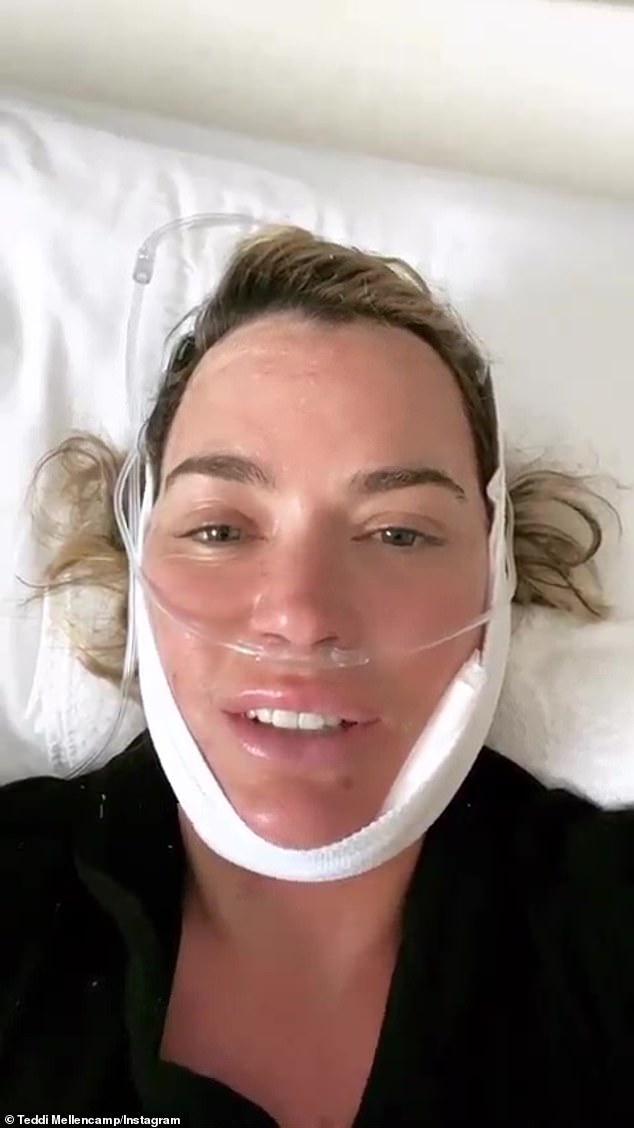 Resting up: And the star was also seen with an oxygen tube in her nose 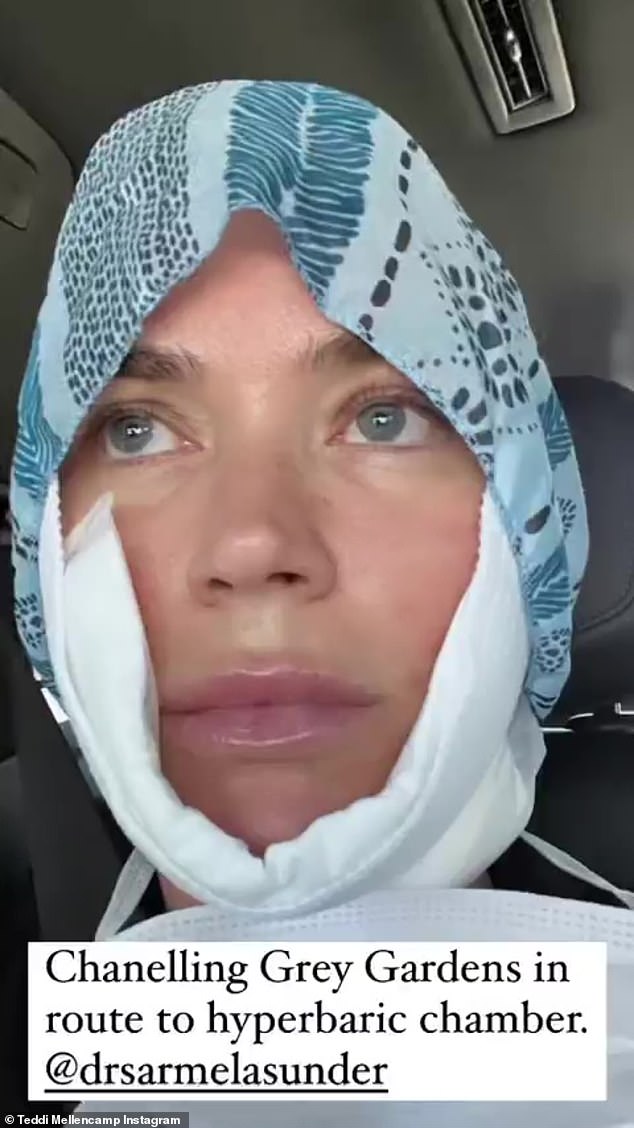 This is me now: She has been generous with sharing her journey with videos on her Instagram Stories. On Monday she was seen with a bandage on her chin and a scarf over her head as she said she was doing a hyperbaric chamber

She has been generous with sharing her journey with videos on her Instagram Stories.

One image saw her still in the hospital with a large bandage around her head as her face was bloated.

On Monday she was seen with a bandage on her chin and a scarf over her head as she said she was doing a hyperbaric chamber.

On Tuesday she showed off the scar under her chin and said she could not believe there was not more bruising as she relayed she was finally able to take a shower.

A week ago she alerted fans that she was going under the knife.

‘I’ve been nervous to talk about this because when you have over a million followers on Instagram there are a lot of people with very strong opinions and they can come at you and they can make you feel all different kinds of ways,’ explained the star as she was makeup free with a black tank top and black Alo cap on.

She added she was ‘100 transparent’ with her fans so she wanted to tell everyone that the loose skin on her neck has always bothered her.

She tried Botox, the strings, fillers, and nothing worked, she insisted.

‘The way that my neck is and with the loose skin, the only way to do it is to pull it up,’ she said as she demonstrated the skin being pulled up with her fingers.

‘One million percent I could leave it,’ she also said but then shared that she did not want to leave it.

And she also said she was working with Dr Sarmela Sunder, a Beverly Hills plastic surgeon. 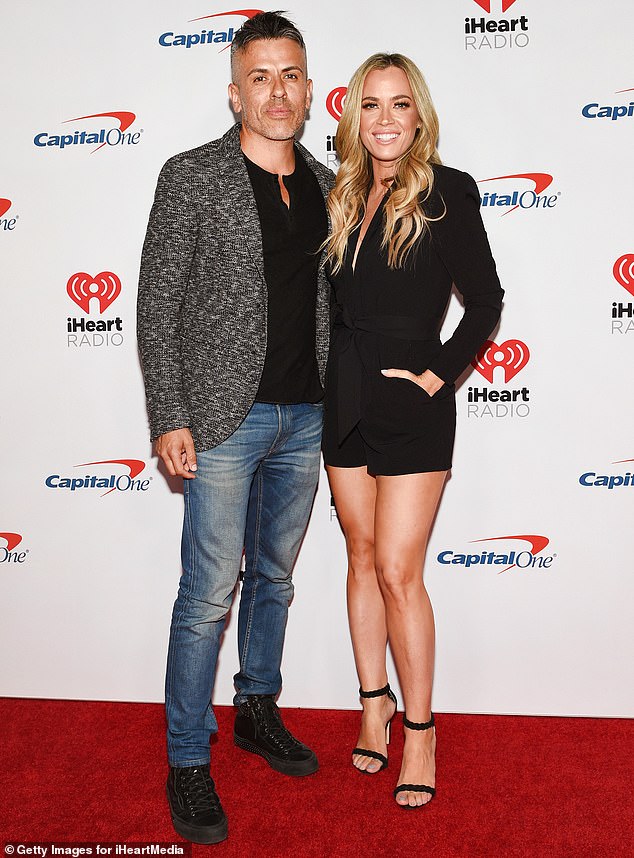 Looking good: Seen in 2019 in Las Vegas with her husband Edwin Arroyave

‘This doesn’t mean I don’t love the skin I’m in but this is something that has bothered me since I was a young girl, it’s a deep dark insecurity that I have and I am just gonna do something about it,’ added the star.

She also said she has loose skin on her belly but is not going to change that. She just wants the loose skin under her chin fixed.

Mellencamp has had surgery before; in 2019 she admitted to having her breasts redone.

She has three kids with husband of 11 years Edwin Arroyave. They are Slate, 11, Cruz, seven, and Dove, two.

He also has daughter Isabella from a previous relationship. 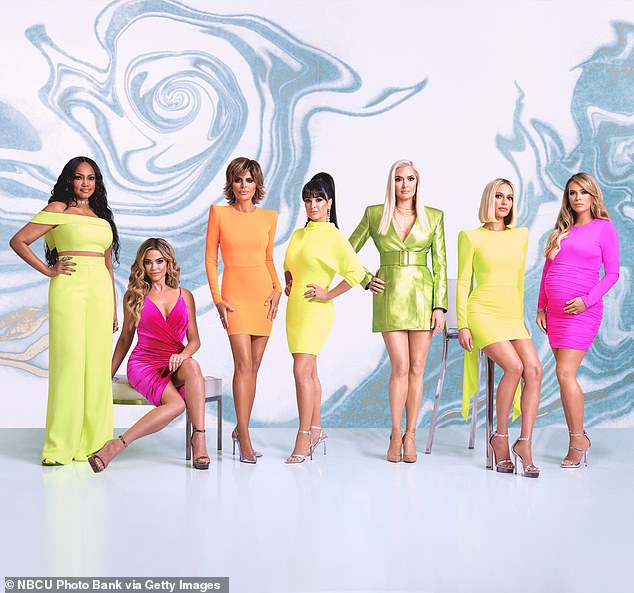