The Batman reviewed by Brian Viner

When you stretch a narrative arc you end up with a flat line, but there’s still plenty to relish: BRIAN VINER reviews The Batman

Those of us old enough to remember Adam West’s Batman in the Sixties TV series, complete with pop-art ‘Pow!’ and ‘Thwack!’ graphics, have since seen the Caped Crusader fly a long way – although not necessarily in the right direction.

George Clooney, Val Kilmer, Michael Keaton, Christian Bale and Ben Affleck are among the stars who have subsequently played the scourge of the Gotham City underworld, and now, in the latest big-budget reboot of the DC Comics franchise, The Batman, it’s the turn of British actor Robert Pattinson.

He’s perfectly fine both as billionaire Bruce Wayne and his crime-busting alter ego, although the extravagant length of this movie, at just a Zzzzz! under three hours, made me decidedly nostalgic for the caped capers of Batman and his sidekick Robin in the long-ago telly version.

Just when you think the story’s all done there’s an unwanted added 20 per cent, almost as if The Batman had been crossed with the VAT man.

When you stretch a narrative arc you end up with a flat line, but there’s still plenty to relish: BRIAN VINER reviews The Batman

Director Matt Reeves, who took a whole 36 minutes less to resolve The War for The Planet of the Apes (2017), evidently decided that this time he needed to stretch his narrative arc.

After all, the illustrious likes of Christopher Nolan and Tim Burton have already made widely-acclaimed Batman films, so how better to create an even bigger impact – Ker-pow! – than with one that cinema audiences might remember for a nasty onset of cramp?

The shame of it is that there’s a cracking movie of little more than two hours fighting – biff! – to get out of the near three-hour running-time. Unfortunately, when you stretch a narrative arc, or indeed any arc, you end up with a flat line. So it is here.

I enjoyed the film’s two parallel stories – one in which Batman tangles with the Gotham City mob led by Carmine Falcone (John Turturro), and another in which he tries to identify a serial killer known only as the Riddler (Paul Dano) – but they both end up flat-lining long before the 176 minutes are up.

Pattinson plays Bruce as a dour, tormented young man, still uncomfortably in thrall to his spiky mentor and father-substitute Alfred (Andy Serkis), and basically too floppy-haired and miserable for anyone to put two and two together and connect him with the masked vigilante who keeps swooping down every time a bat motif appears, illuminated in the night sky.

The basic premise of this doggedly cheerless film is that Batman isn’t yet a fully-fledged crime-fighter. He’s still finding his feet – not easy in that beefy tunic – and so falls into an alliance with a sexy but embittered waitress, Selina (Zoe Kravitz). She works at the sleazy nightclub run by a scarred mobster called Oswald Cobblepot (an unrecognisable Colin Farrell), and although all comic-book enthusiasts know him better as The Penguin and her as Catwoman, the implication is that those nicknames, even more than Batman, have yet to be earned.

There’s a striking dearth of humour throughout but a pleasing wink to the audience when Oswald, his feet bound together, is forced to waddle like a certain flightless aquatic bird. 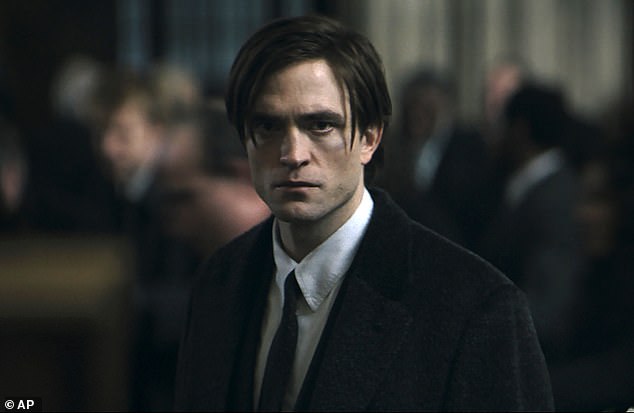 Meanwhile, a sadistic psycho is brutally knocking off the high and mighty but irredeemably corrupt of Gotham City, starting with the mayor (Rupert Penry-Jones). He leaves a creepy riddle at every murder scene, one of many reasons why The Batman feels more like a psychological film noir than a superhero movie, borrowing almost as conspicuously from the likes of The Silence of the Lambs (1991) and Seven (1995) as it does from its most obvious influence, Nolan’s The Dark Knight trilogy.

But where The Dark Knight (2008) had an unsurpassable baddie in Heath Ledger’s Joker, this film creates a problem for itself by keeping its principal fiend from us (brilliant as Dano is) almost until the end. Another self-inflicted issue is Batman’s voice, a kind of monotone whisper. When he says of the crime-ridden metropolis that ‘maybe it’s beyond saving’, I heard it as ‘maybe it’s Beyonce,’ which seemed like a truly startling guess as to the identity of the killer.

Still, once your ears get attuned, and your eyes too, for that matter, since daylight hardly ever encroaches, there is plenty to relish in The Batman. There’s oodles of atmosphere, and for those familiar with the great city of Liverpool, the bonus of realising that it is Gotham’s stunt double. But none of that can mitigate the challenge to the bladder when – eeek! – you realise that you’ve been in there over two and a half hours, with 25 minutes still to go.

The Batman opens in cinemas on Friday