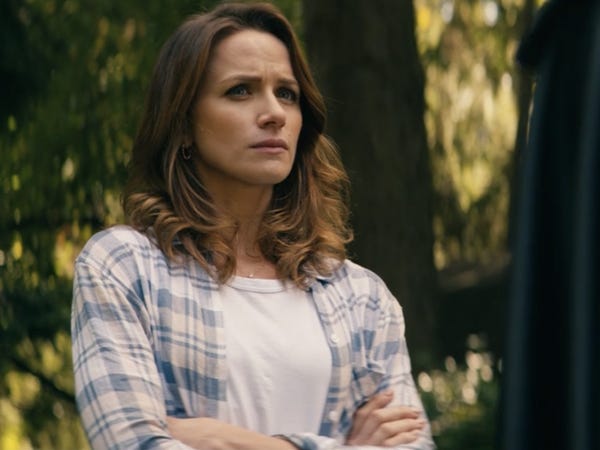 "The Boys" star Shantel VanSanten spoke to Insider about navigating Becca and Butcher's "star-crossed" love story, coping with her character's death, and why she would "100%" love to return to the show.

"Going into season two, of course I had lots of questions and one of them was, 'When will we be exploring more into the Butcher-Becca world?'" VanSanten, who stars as Becca Butcher on the hit Amazon Prime Video show told us.

"And it's such a bummer [because] I wish we could secretly air some kind of content of knowing and understanding how they met and who they were before all of this happened," the actress added.

Fans got to know Becca on season one of the superhero show primarily through flashbacks that showed the happier times between her and husband Billy Butcher (Karl Urban) — her as a senior director of digital marketing at Vought and him without an unyielding desire for revenge  — before she mysteriously disappeared and was presumed dead.

Becca's unexplained disappearance in January 2012 after being raped by The Seven member Homelander (Antony Starr) is what triggered Butcher's determination to take down Vought. Things got even more complicated at the end of season one when Butcher learned that Becca was alive and had a supe son named Ryan (Cameron Crovetti).

On season two, Becca and Butcher properly reunited, but still couldn't get a happy ending.

During episode four, Butcher tracked down Becca in the Vought-run facility that was made to look like a neighborhood and the couple had sex in her car. Afterward, they sat together in the trunk of the vehicle, shared a cigarette, and reminisced about the days when they would smoke pot on the couch and eat Cheetos.

VanSanten said that she came up with the pot and Cheetos line, and it was her idea to have them share a cigarette.

"I feel so lucky that people trusted me, and also that I could feel heard," the actress told us. "I can't say in my career that I've always felt as though my opinions mattered."

VanSanten added: "I will come to the table with ideas because I'm living this character, I know her heart, I know her story."

The actress went on to say that she was "very outspoken" and "had lots of emotions running through me" when they filmed the scenes by the bridge.

"I remember going to rehearse this scene and the director was like, 'So I think you guys are sitting down here by the tire.' I was like, 'No! F— no. I'm sorry, we just had sex in the back of a car. I just got him back physically and we're intimate. I am not about to let him let me go,'" VanSanten said.

The "One Tree Hill" alum said that she wanted to "have this moment where we see them not want to let each other physically go," which is what inspired the shared cigarette.

The actress also felt validated when she approached showrunner Eric Kripke about the pot and Cheetos line and he included it in the script.

"I just felt like all of the work that you do to earn and understand a character was heard, and it made me feel valued and appreciated in a way that a lot of jobs don't always," she told us. "And in that way, I feel like I get to leave my little stamp on the Becca-Butcher love story and on the show."

"It is in my mind such a soulmate love story that is just star-crossed and constantly torn apart, where they just haven't ever really been able to be together," VanSanten said. "That part breaks my heart."

On the jaw-dropping season two finale, Ryan used his laser eyes to harm Stormfront, who was clutching Becca's throat in the woods. His beams severed Stormfront's limbs and burned her, but she remained (barely) alive. But the lasers unintentionally hit his mother Becca's throat and she died in Butcher's arms, begging her husband not to blame Ryan and asking Butcher to keep the boy safe.

VanSanten struggled to come to terms with her character's death

The actress told Insider that she found out about Becca's fate mid-way through season two.

"It's so hard. It's the most bizarre thing, the finality of a death on a show. I struggle with it so much," VanSanten said. "There's grief that comes in that, in feeling like there was more for that person in the way that we feel about the dearest of dear friends, because I poured my heart and my vulnerability and my stories out through Becca and I had hopes and dreams for her future and there's no way to not have those things."

VanSanten went on to say that even though Becca's gone, she hopes that the character will continue to live on as the show continues.

"I trust their storytelling and I know that there's so much of wherever it goes, especially for Ryan, that Becca will always be a part of it, and a part of Butcher and a part of Ryan and they'll go on to honor that, just as though we do for people that we've lost," she said.

Even though Becca's journey on the show is over, VanSanten is '100%' open to returning

"This show is huge and everybody loves it and I love Becca," she said. "Now, do I actually think there's a world where that works? Probably not. And in my mind, I've had to tuck it away."

Despite coming to terms with the finality of her character, VanSanten would love to show up in a clever way, just like "The Boys" brought back killed off character Madelyn Stillwell (Elisabeth Shue) through the shape-shifting supe Doppelganger.

"That's what would be interesting to me, is if she did come back, that she wasn't necessarily in the most tumultuous place that we've seen her in, but that there was some levity or something different and interesting in a way that we got to see Becca," VanSanten said. " That would be something that I would love to explore and play with."

Becca "doesn't get to have fun" on "The Boys," which is also why VanSanten would like to see a more lighthearted side of the character.

"She's always fighting and that's who she is innately and I love that about her and I stand behind it, but just to see a moment of pure joy or something silly or goofy or totally outlandish would be so much fun," VanSanten said. ‘DWTS’ Recap: One Couple Is Eliminated After Bruno Tonioli Breaks A Tie Between The Judges
We and our partners use cookies on this site to improve our service, perform analytics, personalize advertising, measure advertising performance, and remember website preferences.Ok