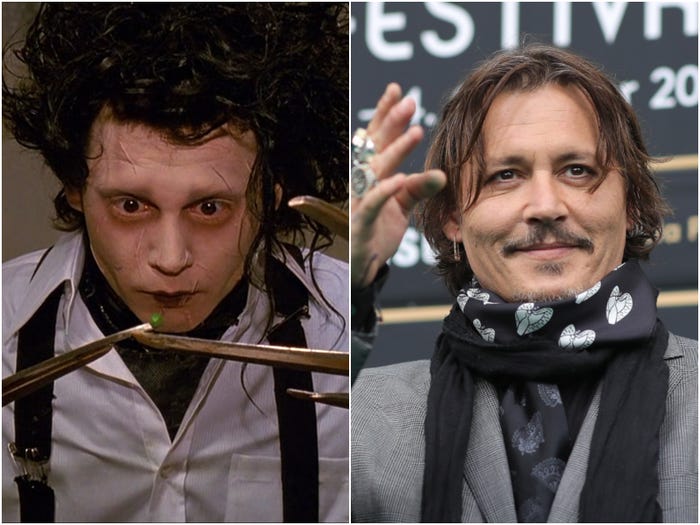 Insider spoke to longtime Tim Burton collaborator Caroline Thompson whose writing brought to life some of the director's most memorable movies including "Edward Scissorhands," "The Nightmare Before Christmas," and "Corpse Bride."

During "Scissorhands," Thompson built a close relationship with the now-embattled actor Johnny Depp who she said would bring her a margarita every morning when they were working together on a different project.

The author and screenwriter weighed in on Depp's recent libel case loss against the publishers of The Sun newspaper in the UK, which she called "he-said-she-said" "bulls—."

Depp decided to sue The Sun and its executive editor Dan Wooten for calling him a "wife beater" in an article referencing his former marriage with Amber Heard. Thompson told Insider she was sad to hear about these allegations.

"I don't want to think badly of Johnny. I only want to think well of Johnny, and I know he's a sweet man. I suspect he's gotten really lost at times in his life," Thompson said.

The screenwriter, who also wrote "The Adams Family," said that she didn't follow the libel trial that Depp lost after Judge Andrew Nicol said The Sun's lawyers had proved what the newspaper reported was "substantially true."

"I had a sense of what's going on. It was he-said-she-said, it's bulls—," Thompson said.

Following the judge's ruling, Warner Bros. asked Depp to resign from his role as Gellert Grindelwald in the Harry Potter spin-off "Fantastic Beasts," which the actor agreed to. Mads Mikkelsen has since been cast as his replacement.

While Thompson thought Depp's removal of "Fantastic Beasts" was "so cruel," she does understand why the decision was made.

"There are fallouts from our hyper-sensitive times. Things go to extremes, and they have to. It's all apart of the zeitgeist we are experiencing right now," Thompson said. "I hope he's okay."

Thompson told Insider that she is still friends with "Edward Scissorhands" costume designer Colleen Atwood, who has worked with Depp frequently throughout her career and is the costume designer for the "Fantastic Beasts" franchise. Thompson said she spoke to Atwood about Depp recently.

"She's doing 'Fantastic Beasts' and she was doing a costume fitting with him when all this came down and I asked if he's okay, and she just said 'I hope so.'"

Thompson's agent approached her to write a script for Depp

Thompson told Insider that she would "never in a million years want the kind of celebrity that he has."

"The cruellest thing we could do to a human is to put them on display like that. That he's still alive is probably a miracle," she added.

Thompson hopes Depp's career can recover from this scandal, and said that while she doesn't write all that much for the film business, her agent asked her if she would write a script for Depp.

"If [an idea] occurred, of course, I think he's marvellous," Thompson said.

"I hope he not only lives, but flourishes and gets through this, that's really how I feel about it."