After a year on hiatus, the Met Gala returned and proved it’s worth the long wait by serving up all the dresses and plenty of drama. Keeping with the Metropolitan Museum Costume Institute exhibition, the 2021 theme was “In America: A Lexicon of Fashion,” but stars didn’t exactly take the patriotic theme to mean red, white, and blue. From Kim Kardashian’s shocking all-black look to Billie Eilish’s fairytale gown, red carpet attendees knew better than to play it safe at one of fashion’s biggest nights.

Among the roster of A-listers were Hailey and Justin Bieber, who — while styled conservatively compared to, say, Iman and her golden headdress — still looked incredibly glamorous. Dressed to impress, Hailey flaunted her figure in a slim, plunging black dress by Saint Laurent, which she accessorized with Tiffany & Co. jewelry. Justin matched his wife in a black suit with a white undershirt and tie, pairing his formalwear with a gold watch and snazzy kicks. Fresh off his performance of “Stay” with The Kid LAROI at the MTV Music Video Awards, the “Love Yourself” singer treated fans to an impromptu performance of his hit song “Baby” — so safe to say, he seemed to be in a great mood. But could “Baby” be telling us something different, and could Justin’s good spirits be in reaction to his wife’s possible bun in the oven? Here’s why “Beliebers” and Met Gala viewers alike think Hailey could be pregnant.

Is baby Bieber on the way? 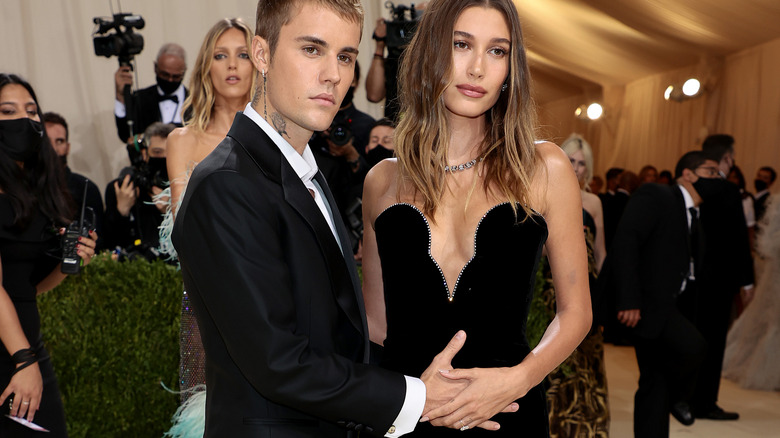 Justin and Hailey Bieber first sparked pregnancy rumors when they rolled up to the Met Gala red carpet and posed for photos. Because the “Peaches” hitmaker seemed proprietary about placing his hand on Hailey’s stomach, Twitter took his body language as a sign that he was saying something without saying something. “Guys I think Justin [is] try[ing] to tell us that hailey Bieber is pregnant,” one fan tweeted. A Hailey fan account shared a clip of the supermodel gently removing her hubby’s hand from her stomach, as she worried it would start rumors the couple was expecting. “Babe, they’ll think I’m pregnant,” the user wrote. “Hailey Bieber when Justin put his hands on her belly you can tell she said it’s gonna look like I’m pregnant LMAOOO,” someone else added.

This isn’t the first time Justin has hinted about a possible pregnancy. In July, the Grammy winner shared a black-and-white image to his Instagram that showed the couple in swim gear, with the caption “mom and dad.” Fans immediately took note, but Hailey shut down the rumor train before it could gain much traction, commenting, “I think u should maybe change this caption to *Dog Mom and Dad* before anyone gets it twisted.” And in 2018, the supermodel told Vogue Arabia that while she loves kids, she’s not interested in having them “anytime soon,” so maybe these Met Gala rumors really are just rumors.