The True Story of John Dillinger's Life and Death

The current coronavirus pandemic has led fans to binge watch the TV shows and movies that they may have missed out on, and one recent pick that’s been rising in the Netflix rankings is the 2009 film Public Enemies.

Because the movie mostly delves into Dillinger’s later life, there might still be some things that you don’t know about John Dillinger—here’s the real true story of the gangster’s life and death.

Public Enemies: America’s Greatest Crime Wave and the Birth of the FBI

Where was John Dillinger born?

John Dillinger was born on June 22, 1903, in Indianapolis, Indiana. His mother died when he was young, and he was mostly cared for by his older sister Audrey. After Dillinger’s father remarried, Dillinger reportedly had a bad relationship with his stepmother and strict father.

As a teenager, Dillinger got in trouble for fighting and petty theft, but other reports state that he was “generally a cheerful, likable kid who didn’t get in to any more mischief than other boys.” Dillinger later quit school to work in a machine shop, so his father decided to move the family to the more rural town of Mooresville, Indiana. Dillinger still refused to go back to school, and when he was arrested for auto theft in 1992, he chose to enlist in the Navy. 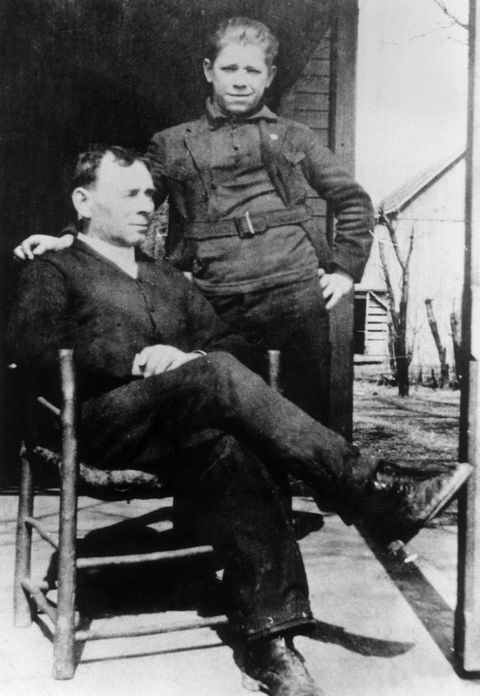 Dillinger with his father around 1915.
Hulton ArchiveGetty Images

Dillinger was a machinery repairman on the battleship USS Utah, but he deserted a few months later when the ship was docked in Boston in 1923. He was back in Indianapolis by 1924, and the 21-year-old married a 16-year-old named Beryl Ethel Hovious and attempted to settle down. However, Dillinger had trouble finding work, and he soon decided to get back into crime with his friend and ex-convict Ed Singleton. The duo robbed a grocery store, but they were quickly apprehended.

Singleton pled not guilty and was sentenced to years in prison, while Dillinger’s father advised him to confess. Dillinger decided to plead guilty to assault and battery with intent to rob and conspiracy to commit a felony, and he received a sentence of 10 to 20 years in prison. Dillinger and his father were both stunned by the harsh sentence, and while his father tried to plead with the judge for a shorter sentence, it was to no avail.

Dillinger began serving his sentence at the Indiana State Prison in 1924, and he was released on parole in 1933 after his father launched a campaign for his release (he also got divorced sometime during this period). Dillinger was depressed, withdrawn, and bitter due to his long sentence, although he made friends with seasoned bank robbers while in prison. After his release, Dillinger immediately returned to a life of crime.

What did the Dillinger Gang do?

Less than a month of after his release from prison, Dillinger robbed his first bank, taking $10,000 from the New Carlisle National Bank in Ohio. In August 1933, Dillinger robbed another bank in Ohio, but he was later caught and taken to the Allen County Jail. When the police searched Dillinger, they discovered what was later revealed to be a prison escape plan.

Dillinger had mocked up the plan to help his friends escape from the Indiana State prison, and four days after his arrest, the first Dillinger Gang (Pete Pierpont, Russell Clark, Charles Makley, Ed Shouse, Harry Copeland, and John “Red” Hamilton) escaped from prison. They used guns that had been smuggled into their cells, and during their escape they reportedly shot two guards.

The members of the gang arrived in Ohio on October 12, and they pretended to be Indiana State Police officers. They claimed that they had orders to extradite Dillinger to Indiana, but when Sheriff Jess Sarber, asked to see their badges, a member of the gang shot him dead. They then released Dillinger from his cell and escaped back to Indiana.

The gang later added members including Baby Face Nelson (who later became famous in his own right), Homer Van Meter, Russell Clark, Tommy Carroll, Eddie Green, and John Paul Chase. The Dillinger Gang robbed more than a dozen banks in the Midwest between September 1933 and July 1934, and they killed about 10 people. During this period, the gang also performed two other escapes from jail, including the escape using a wooden gun from the Crown Point Jail in Indiana, which is shown in Public Enemies. It’s been estimated that Dillinger and his crew stole about 500,000, or $7 million adjusted for inflation.

The Dillinger Gang was so dangerous because of their modern usage of lookouts, vault men, and getaway maps, and they also had machine guns and bulletproof vests at their disposal.

In April 1934, the gang was hiding out at the Little Bohemia Lodge in Wisconsin, and the FBI found out. FBI Agent Melvin Purvis tried to assemble a team to storm the lodge and capture Dillinger and his gang, but it didn’t work—not only did the Dillinger gang escape unharmed, but the FBI killed innocent bystanders and lost a member of their team in the gunfight exchange. This incident embarrassed the FBI and almost caused J. Edgar Hoover to lose his role as Director of the FBI.

In mid-1934, Dillinger went to Chicago, and he tried to remain relatively anonymous as the FBI had named him as Public Enemy Number One and announced a reward for his capture. He underwent some plastic surgery, in order to make himself less recognizable, but it’s also rumored that he attended a Chicago Cubs game in June and July of that year. 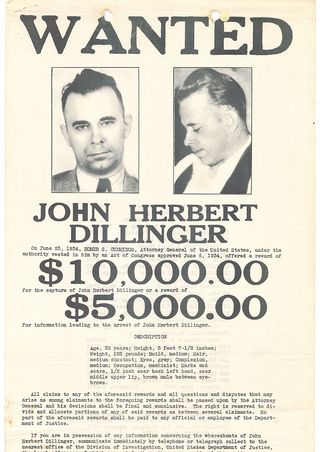 Where and how did John Dillinger die?

On July 22, 1934, 31-year-old Dillinger was killed by FBI agents as he left the Biograph Theater in Chicago. He had been betrayed by brothel owner Ana Cumpănaș (nicknamed the Woman in Red), as she offered the FBI information on Dillinger and his whereabouts in exchange for their help in preventing her deportation to Romania—however, she was still deported in 1936.

Cumpănaș told Agent Melvin Purvis that she, Dillinger, and another woman were going to the movies, and the agents accosted him as the trio walked outside. Dillinger tried to grab his pistol and run, but agents Clarence Hurt, Charles Winstead, and Herman Hollis shot at him, with four bullets striking him. As Dillinger lay dying on the pavement, onlookers reportedly dipped handkerchiefs into his blood for souvenirs, and the police had to be called to secure the area. While it’s been rumored that Dillinger’s last words were, “You got me,” the FBI actually reported that he had no last words. In Public Enemies, Dillinger’s last words were “Bye bye blackbird,” but it was totally untrue, and it was a detail added for dramatic effect to connect Dillinger’s death to his ex-girlfriend Billie Frechette. Dillinger had no children or wife at the time of his death. 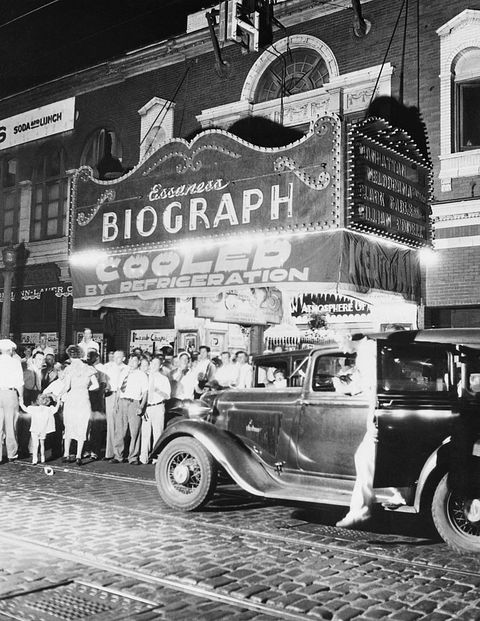 The crowd outside The Biograph after Dillinger’s death.
BettmannGetty Images

After his death, Dillinger’s body was put on display at the Cook County Morgue, and an estimated 15,000 people viewed his corpse before he was taken back to Indiana and buried at the Crown Hill Cemetery in Indianapolis. Dillinger’s grave became something of a tourist hot spot, and his gravestone had to be replaced several times because people would chip off pieces to take home. A slab of concrete was later poured over his grave to discourage grave robbers.

However, fingerprints from the body matched those taken from Dillinger in previous arrests, and Dillinger’s sister positively identified his body before burial.

And while there were plans to exhume Dillinger’s body in 2019 because some of his relatives still believe that that the FBI killed the wrong man, Dillinger’s nephew Michael Thompson withdrew his lawsuit against Crown Hill Cemetery in 2020 after they resisted efforts to proceed with the exhumation. Crown Hill also provided a statement to Indianapolis TV station RTV6:

“Crown Hill objects to the exhumation of John Dillinger. We have a duty to the families we serve to ensure the safety and integrity of the Cemetery which is threatened by the proposed exhumation…Additionally, we received notice that not all of Mr. Dillinger’s next of kin agree with the exhumation.”