They wed in an 18th century villa in Sicily last month, after three years of dating.

And Thom Yorke looked smitten with his wife Dajana Roncione as they arrived in style on the red carpet at the 15th Rome Film Festival.

The Radiohead frontman, 52, and Italian actress, 36, wrapped their arms around each other as they posed for photos at the socially distanced event, with Dajana gently laying her hand on her husband’s shoulder. 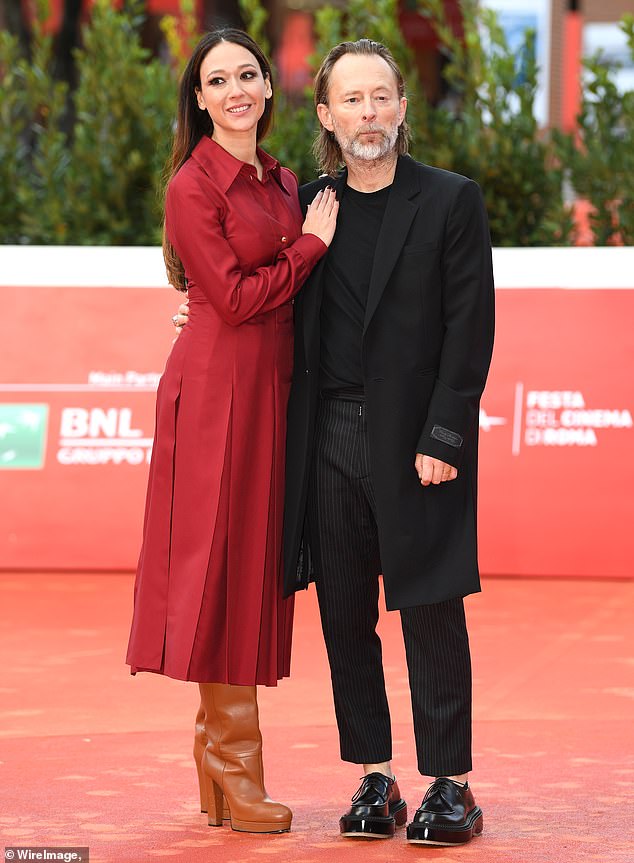 Sweet: Radiohead’s Thom Yorke, 52, looked smitten with wife Dajana Roncione, 36, as they made their red carpet debut as a married couple at the 15th Rome Film Festival on Saturday

Dajana put on a stylish display as she slipped into a red long-sleeved gown that had a pleated skirt and a statement belt.

She boosted her height in a pair of light brown heeled boots, while she opted to keep her accessories to a minimum so all attention remained on her ensemble.

The Max Fortuna star wore her brunette locks in a sleek, straight style that fell over her shoulders, and she accentuated her natural beauty by wearing a light palette of make-up.

Thom, meanwhile, kept his look simple as he paired a longline black jacket with a matching shirt and pinstripe trousers. 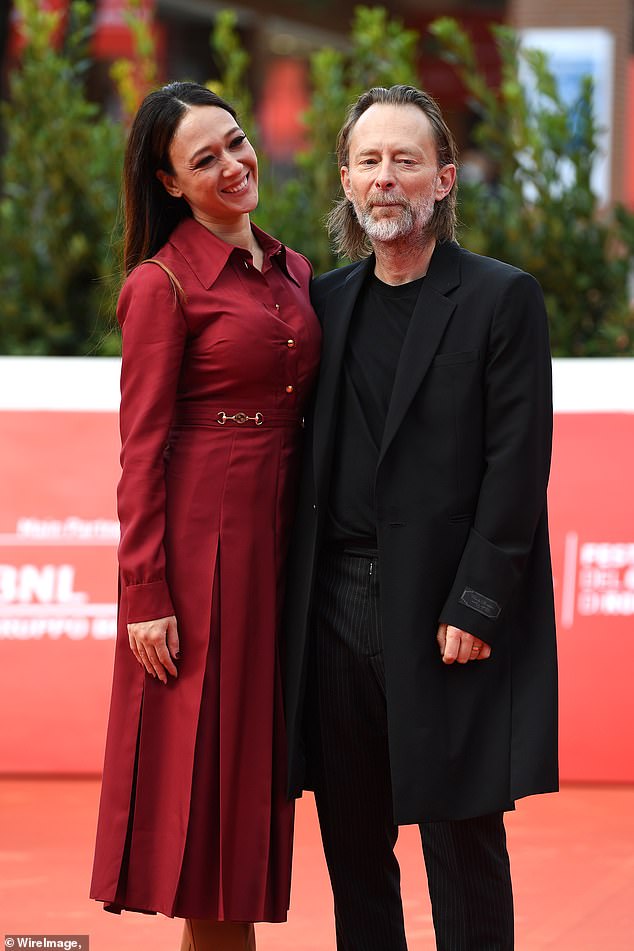 Smitten: The Radiohead frontman, 51, and Italian actress, 36, wrapped their arms around each other as they posed for photos at the socially distanced event 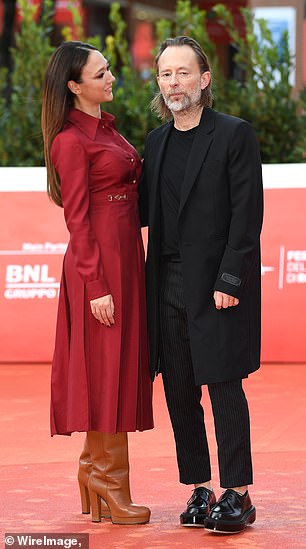 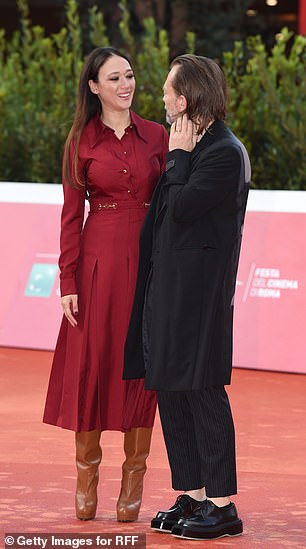 Chatty: The happy couple were seen talking together on the red carpet 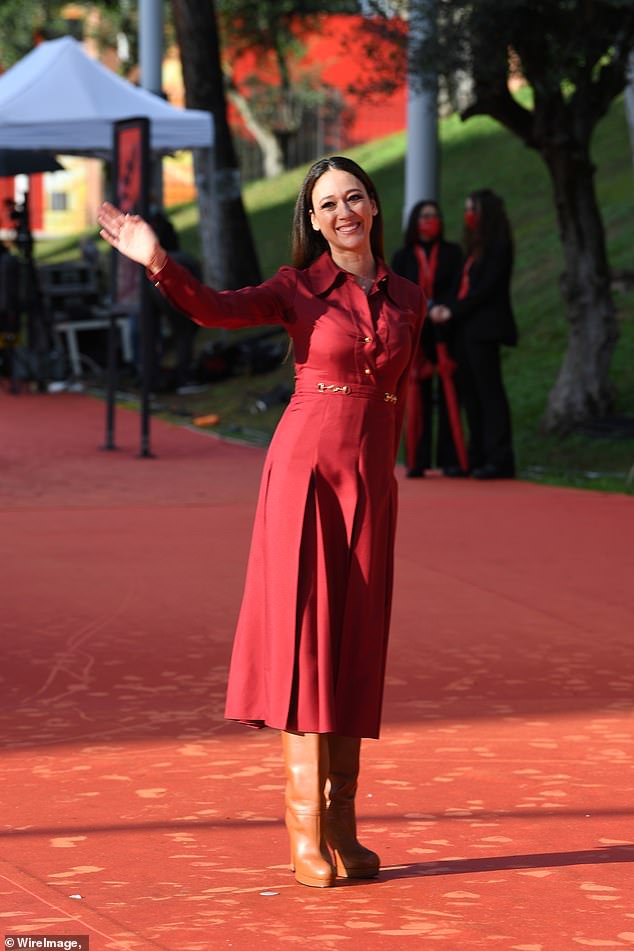 Chic: Dajana put on a stylish display as she slipped into a red long-sleeved gown that had a pleated skirt and a statement belt

In September it was reported by  Italian Vanity Fair that the pair had tied the knot at the Valguarnera in Bagheria.

During the celebrations, the happy couple ensured all COVID-19 rules were followed meaning they didn’t have a dance floor and provided masks to their ‘120 guests’.

It is thought that Thom’s Radiohead bandmates – Jonny and Colin Greenwood, Ed O’Brien and Philip Selway – were all invited to the stunning Sicilian wedding.

As well as making sure guests didn’t mingle too closely on the dance floor, Thom and Dajana also had their catering staff take Covid tests, reports La Repubblica. 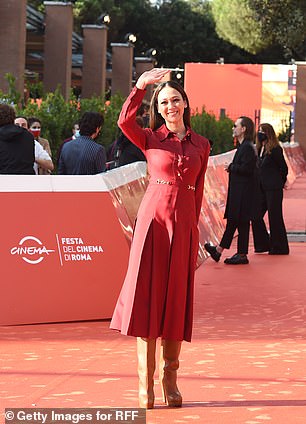 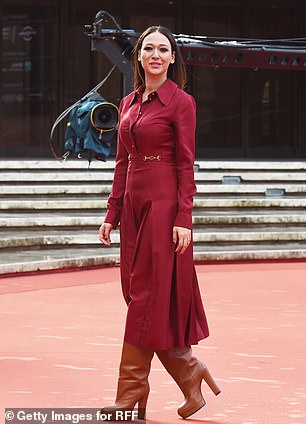 Stylish: Dajana boosted her height in a pair of light brown heeled boots, while she opted to keep her accessories to a minimum so all attention remained on her ensemble 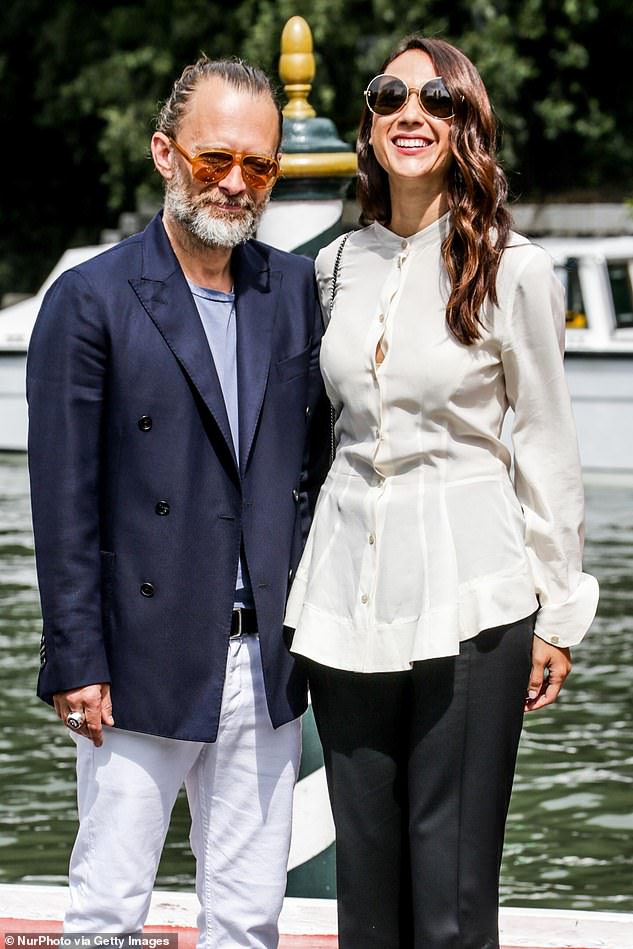 Congratulations! In September it was reported by Italian Vanity Fair that the pair had tied the knot at the Valguarnera in Bagheria after three years together (pictured in 2018)

Speaking ahead of the nuptials, Thom told Vanity Fair: ‘Despite all the difficulties caused by the global pandemic, we are proud and happy to get married here in Sicily. Sicily is Dajana’s native island.’

The musician added that he hoped: ‘In these strange times our wedding can be a small celebration, with our friends and family, of Sicilian culture and its way of life.’

Pictures shared by photographer Greg Williams from the happy couple’s big day show them relaxing in a stunning room which boasts a huge chandelier.

While another captures a candid moment of a grinning Dajana running towards her new husband and holding up her off-the-shoulder layered wedding gown. 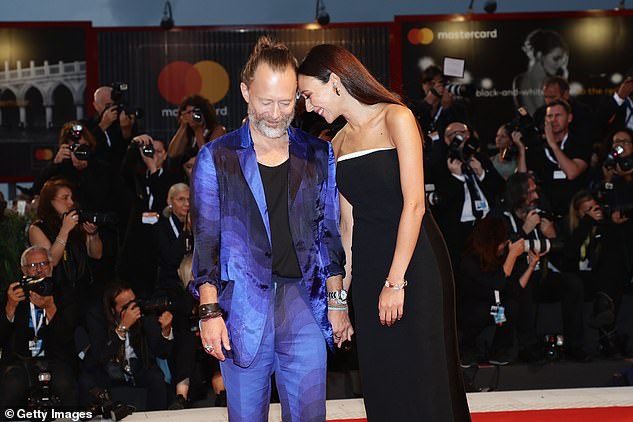 Husband and wife: The couple were first linked in 2017, with Dajana going on to appear in Thom’s 2019 short film ANIMA (pictured at the 75th Venice Film Festival in 2018)

Thom and Dajana were first linked in 2017 and were seen hitting the beach in Miami that March, three months after the death of his ex-partner of 23 years, Dr Rachel Owen.

Artist Dr Owen, who Thom shared children Noah and Agnes with, passed away aged 48, following a battle with cancer.

At the time Pembroke College Oxford, where Dr Owen was a retained lecturer, released a statement paying tribute. 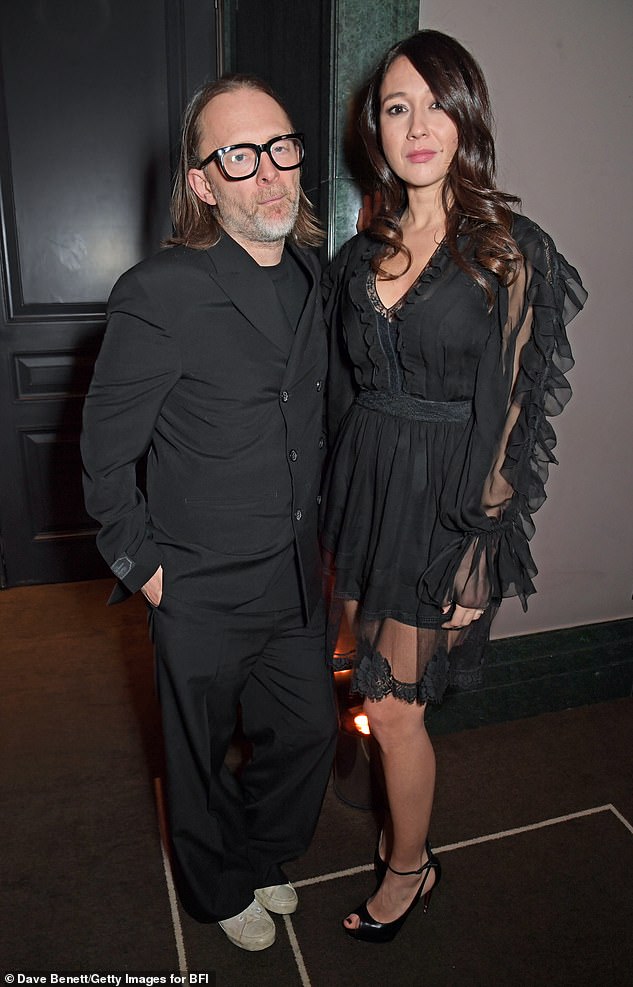 Staying safe: Thom and Dajana are said to followed all Covid-19 regulations for their nuptials, including providing face masks and not having a dance floor (pictured in March 2020)

It said: ‘It is with great sadness that the College marks the death of Dr Rachel Owen.

‘Despite her declining health from cancer in the last year, she asked to continue to teach, which she did right until the end of last Michaelmas term. She was 48 years old and leaves behind a son, Noah, and a daughter, Agnes, aged 15 and 12.

‘One of her latest artistic productions was a series of prints inspired by the Cantos of Dante’s first book of the Divine Comedy. The prints will be exhibited at Pembroke’s JCR Art Gallery during Trinity term.’

Dajana was the first person the Radiohead singer dated since splitting from his long-term former partner Dr Owen in 2005, after 23 years together.

The Italian actress later appeared in Thom’s ANIMA short film in 2019. The piece has been described as ‘mind-bending’ and was directed by Paul Thomas Anderson.

Most recently, Dajana has worked on La Concessione del Telefono while Thom has hinted that Radiohead might be considering a 2021 tour, reports NME. 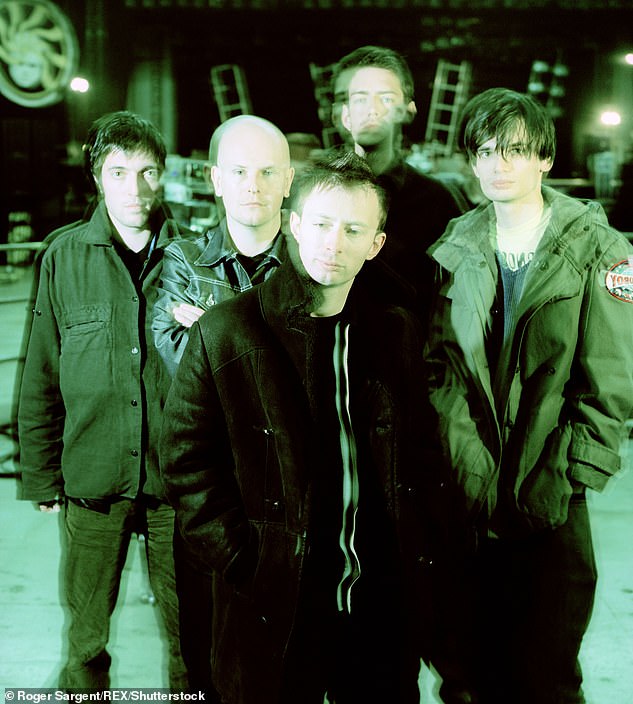 Guest list: Thom’s Radiohead bandmates – Colin Greenwood, Phil Selway, Ed O’Brien and Jonny Greenwood – are all said to have been at the wedding (pictured in 1997)