TikTok might be the last place you’d look for a history lesson, but high school senior Taylor Cassidy is working to change that (and make it fun). Since joining TikTok in 2019, the 18-year-old St. Louis native has quickly emerged as one of the platform’s most notable young voices of change by using her account to bridge the information gap when it comes to Black history. "I wanted to turn it into a platform where somebody could come and gain something they can take with them forever," Cassidy explains.

Tap on any video and it’s immediately clear how excited the TikToker is to share her knowledge. Cassidy keeps you smiling more during a history lesson than you ever thought possible with frequent costume changes to match her subject, props, funny voice-overs where she interrupts herself mid-sentence, and the use of a green screen.

Take her Feb. 2, 2021 video about President Obama’s journey to the White House. In it, Cassidy shares how Obama was “stuntin’ even before we knew he was stuntin’” when he became the first Black president of the Harvard Law Review in 1990. She also references “thee goddess queen, miss fuh-evah style icon, Madame Michelle Robinson,” aka Michelle Obama. Of course, because it’s Cassidy, you can also expect plenty of dance moves sprinkled throughout.

Cassidy’s unique formula — which she calls a mix of "good energy, self love, and chaos" — has earned her more than 2.1 million followers and more than 52 million views on her videos as of Feb. 4, 2021, and a nod from TikTok itself as one of 2020’s most impactful voices.

She began her account "for fun" in November 2019, but it quickly turned into a way to promote youth activism and educate her followers. “Fast Black History really boosted my account and gave me not only a presence on the platform, but also a brand,” she says. 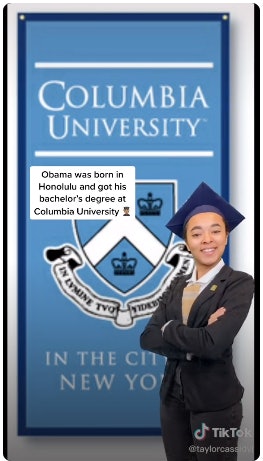 The high school student says her video on costume designer Valdes in particular made her realize that a lot of Black history wasn’t mainstream knowledge. "It was overwhelming because people were like, ‘I never knew this,’ and people were really realizing, ‘I learn more from TikTok than I do in school,’" Cassidy explains.

One of Cassidy’s other popular series Black Girl Magic Minute was born from her desire to elevate Black voices on TikTok. She was having a bit of a creative block in September 2020, but she got inspired by other people posting videos about giving credit back to Black creators for trends and music they were making.

"I wanted to uplift those voices and create an environment where people could come and see the beauty and the joy that we create and find ways to support them," Cassidy says.

Cassidy’s desire to lift up Black creators combats the "moments where TikTok suppresses Black voices," she says. A number of Black creators echoed this critique during a TikTok blackout in May 2020. At that time, Black TikTokers claimed they "felt unsafe, unsupported, or suppressed" by the platform. There was also widespread criticism for a glitch that made it appear like the hashtags #BlackLivesMatter and #GeorgeFloyd received zero views. In response, Vanessa Pappas, TikTok’s U.S. general manager, and Kudzi Chikumbu, director of the creator community, shared a blog post in June 2020 where they vowed to do better, acknowledging they need “to regain and repair that trust.”

The company also announced it would be donating $3 million to Black non-profits and rolling out a program for Black creatives in an effort to fund and elevate Black voices.

Still, Cassidy says she’s felt unsupported by the app during instances when she says she’s encountered blatant racism. She vividly remembers one such incident when she went live on TikTok for the first time on her birthday in January 2020, shortly after hitting the 100,000 follower milestone.

"I was celebrating with everybody and out of the blue, somebody had gone into my Live and started commenting — over and over and over again — the n-word," Cassidy says. She says she was surprised TikTok didn’t have a mechanism in place to combat this.

"It wasn’t censored. There was nothing picking it up or kicking him out or anything," she continues. "I was still a beginner to the app, so I didn’t know how to block him. I ended up ending the Live early and really trying to come to terms with the fact that that was allowed on the platform." In response to an inquiry about hate speech on the app, a TikTok spokesperson tells Elite Daily, "We do not tolerate hateful behavior on TikTok, and we work to protect our community by removing hate speech and making it easier to block or report abusive content and accounts."

Even with her share of challenges on the app, Cassidy says it was an "incredible" experience when TikTok named her as one of its top 10 Voices of Change in December 2020.

"It felt like the platform was making strides to recognize creators, all of our hard work, and all of our passion that we were putting into our videos, not only to educate, but to spread awareness about the social movements that were going on last year," she says. "I was incredibly honored and just so moved.”

When creating her TikToks, Cassidy aims for "impact over popularity" and tries not to connect the value of the video to the number of views and likes it gets. 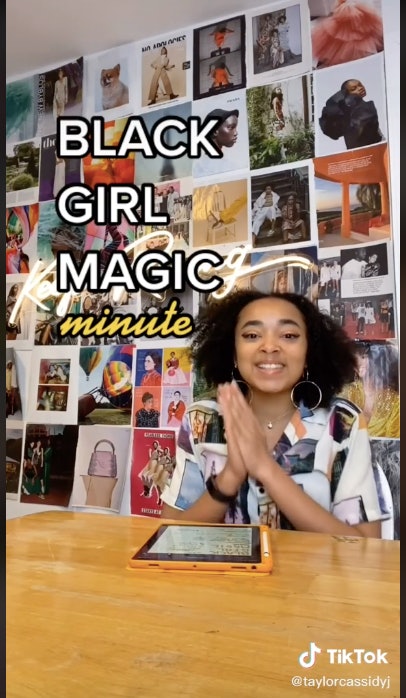 "Seeking validation through the numbers won’t make your content better. It’ll just make it belong to somebody else and not yourself," she says. "Whenever I create, I focus on what impact it will make on somebody’s life rather than how many people I can reach."

Cassidy can spend up to a full day creating one of her history-filled TikToks. In addition to research and putting together costumes, the teen also crafts an outline with jokes and visual cues as well as a rough storyboard where she’ll draw out every single scene of the video with stick figures. And that’s even before filming the video, which takes about an hour with costume changes and green screens, as well as editing.

Cassidy says sometimes it’s easier said than done not to focus on the numbers. "This summer, I did go through a time where it was really hard for me to separate how my videos performed with the content and the value that I put into it," she says.

Cassidy has learned to distance herself from the app whenever it starts to impact her mental health. "Whenever you feel that urge to create to get numbers back up, it’s time to turn off the app," she says. "As hard as that is … it’s better for your mental health and your creative mind."

Now, whenever Cassidy posts a video, she tries to stay off the app for at least an hour so she doesn’t keep tabs on the numbers. "I literally will my eyes not to look at the views, as hard as that is," she says.

Cassidy sees herself continuing to work as a content creator in the future. She also hopes to head behind the camera one day and interview movers and shakers in different industries. With high school graduation on the horizon in May, Cassidy plans to take a gap year to focus on going full-time with content creating and entertainment, and she’s “super excited” to see what happens in 2021.

As she continues to gain followers and views, Cassidy says the most gratifying part of being on TikTok is connecting with others, particularly other Black women.

She cites a December 2020 video she posted about weaves as one of her favorites. "I asked all the Black girls on my platform, ‘Do you have a hair box — a box full of leftover weave or braiding hair?’ And everyone just poured in with the Duets, showing the places in their house where they keep their braiding hair," she says. "I loved it so much because something as simple as braiding hair connected this community and showed us that we’re not that different."

In Elite Daily’s Life Behind the Likes series, we talk to the people you know on the internet to find out who’s really behind the screens. Read more here.