While vacationing with Gisele Bundchen in Costa Rica, Tom Brady had a bandage wrapped around his knee as he recovered from surgery.

Tom Brady is enjoying the off-season by vacationing with his wife, Gisele Bundchen, and their kids in Costa Rica. After winning the Super Bowl in February, Tom had knee surgery, but now that he’s on the road to recovery, he was able to travel for a family getaway. In photos from the trip, WHICH YOU CAN SEE HERE, Tom and Gisele looked tanned and relaxed as they sat next to each other during an evening out.

The Tampa Bay Buccaneers quarterback was also noticeably sporting a bandage around his left knee. At the beginning of March, he revealed that he’d undergone knee surgery following the Super Bowl. He shared the news during an interview with James Corden, but did not specify what led to the procedure. “I actually had knee surgery, so I’m kind of rehabbing now, which is giving me something to do,” Tom explained. “But I’d much rather be staying active like I normally do.” 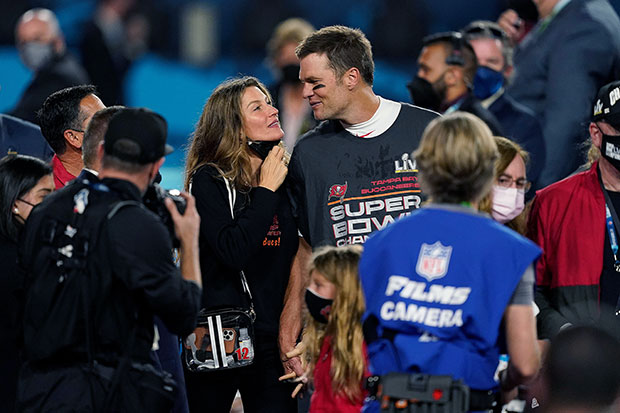 Tom is clearly expecting a solid recovery, though, as he’s already promised to return to the football field for the upcoming season. The QB’s championship win with the Bucs marked his seventh Super Bowl victory. The 2020 season was his first time not playing for the New England Patriots since he began his NFL career in 2000. On March 12, he signed a one-year contract extension with the Bucs to play through the 2022 season.

For now, though, Tom is focused on his family and recovery. He and Gisele, who have been married since 2009, have two kids — Benjamin, 11, and Vivian, 8 — together. He also has a son, Jack, 13, with his ex, Bridget Moynahan. All three kids, along with Gisele, were in attendance for the Bucs’ Super Bowl win, and joined Tom on the field after the game to celebrate. Bridget also left Tom a congratulatory message on social media to acknowledge the historic victory.