After Tom Brady won his seventh Super Bowl on Feb. 7, his wife, Gisele Bundchen, helped him celebrate by scooping him up into a group family hug.

Gisele Bundchen could not have been more proud of Tom Brady after he led the Tampa Bay Buccaneers to a Super Bowl win on Feb. 7. The Bucs beat the Kansas City Chiefs 31 to 9, and Gisele was in the crowd celebrating like crazy. Once it was safe enough to do so, she joined Tom to congratulate him on the incredible win.

In a sweet moment, the Super Bowl’s MVP leaned in as the supermodel gave him a kiss and a tight hug. The quarterback’s three children – John, 13, Benjamin, 11, and Vivian, 8 – also joined in to congratulate the NFL legend with a family snuggle. 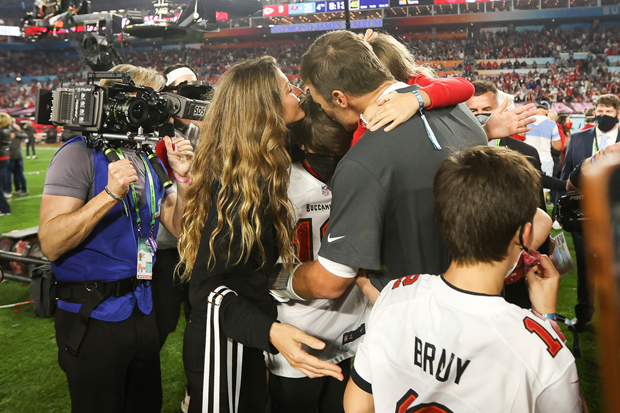 This was Tom’s first season with the Bucs after playing with the Patriots for 19 years. He proved that he still has what it takes to be a Super Bowl champion by getting the Buccaneers their second Super Bowl win (the last time they won was in 2003, which was their first time ever playing in the game). Of course, Tom is no stranger to the Super Bowl — he played in NINE Super Bowls with the Patriots and won six times.

Gisele was Tom’s lady for six of those previous Super Bowl appearances, three of which he won. She and Tom got together at the end of 2006, just a few months before his ex, Bridget Moynahan, revealed that she was pregnant with his child. Despite the difficult circumstances, Tom and Gisele’s relationship persevered. They tied the knot in 2009 and went on to have two kids of their own — a son, Benjamin, was born in 2009, and a daughter, Vivian, was born in 2012.

Through all of their years together, Gisele has been Tom’s number one supporter. She showed up to Super Bowl LV wearing a TB12/Buccaneers shirt, and posted various videos of herself cheering at the game on her Instagram Story. The coronavirus made the 2020 football season look a little different, but even when Gisele wasn’t able to be at the games in person, she made sure to cheer Tom on from afar with her kids.

The 2020 season also reunited Tom with his longtime former Patriots teammate, Rob Gronkowski. Rob’s girlfriend, supermodel Camille Kostek, was also in the crowd at the Super Bowl. Gronk scored the first two touchdowns of the game, and she admittedly lost her voice while cheering for him in the stands. What a night!