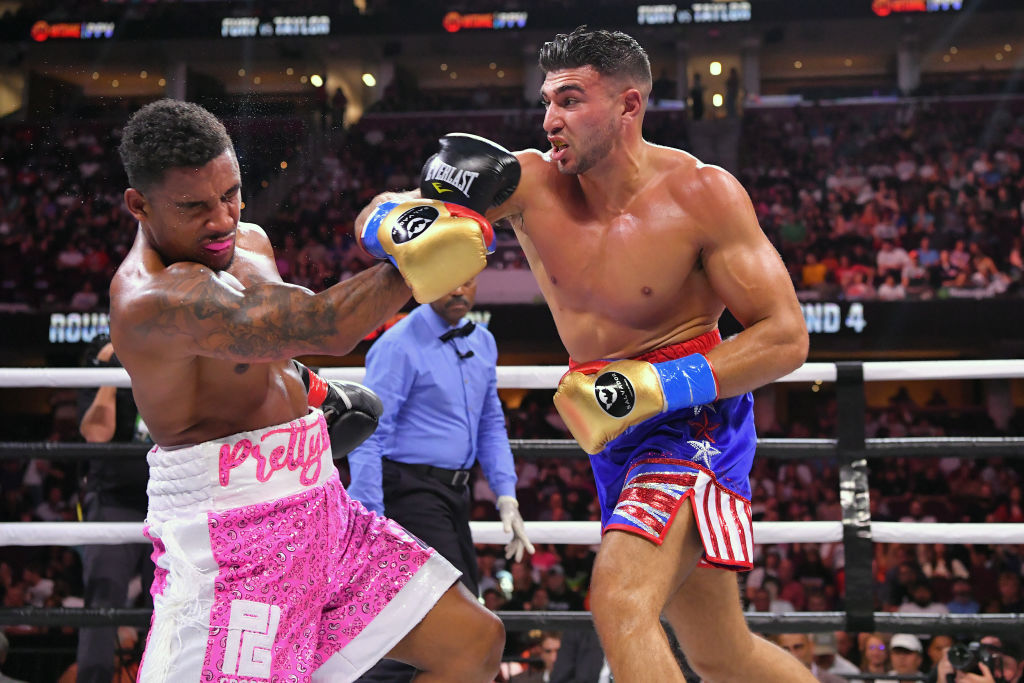 Tommy Fury dedicated his win in his American boxing debut to girlfriend Molly-Mae Hague and his father, who couldn’t be in the US for the fight.

The Love Island star’s boxing career is going from strength to strength, and he made his debut in the States on Sunday night, facing off against Anthony Taylor on the undercard on Jake Paul’s fight vs Tyron Woodley in Cleveland.

His girlfriend Molly-Mae and father John Fury weren’t able to fly over, while his brother, fellow boxer Tyson Fury, is in the UK looking after his newborn daughter Athena, who spent time in the ICU after her birth.

However, after Tommy beat Taylor in a unanimous decision after four rounds, he shouted out his dad and girlfriend in front of the US cameras.

The 22-year-old said: ‘Dad, Molly, I wish you could be here tonight, but that was for you. We’re learning, we’re building, we’re gonna keep winning, and hopefully you can be here next time. I love you both.’

The reality star – who has just been made creative director for the EU and UK for PrettyLittleThing – added: ‘Get home boy.’

Tommy also used his post-fight interview to call out Jake Paul and pledge to fight him in the States, after beating his sparring partner.

He said: ‘He’s got no excuse in not taking the fight. Let’s get it on Jake Paul. I’ve done my bit, you do your bit tonight, and we’ll get it on.

‘It should be easy enough for him. You win four rounds with your sparring partner, jump in the ring. It should be no test at all.’

Earlier this year, Jake shared a screenshot of an alleged DM from Molly-Mae sent in October 2018, which read: ‘Might be coming to America later this year and have always been a fan of your videos. Maybe you can show me around?’

Molly-Mae denied the message was real, and Tommy later threatened to ‘break every single bone in his face’.

He told Sky Sports: ‘I train and fight hard for a living. I’m not bringing anyone’s missus into this, I’m not doing anything like that because I’m a true professional. I will let my fists do the talking. For every bad thing they’ve said, believe me, they’re going to get  a swift right hand for it.

‘I’m going to break every single bone in his face, because you don’t bring people’s loved ones and missuses and all their partners into it. It’s a fight. They’ve got nothing to do with it, leave them out of it, and me and you, let’s fight.’

Tommy is now 7-0 in his career, but promised that he is ‘nowhere near the finished article’ yet.

He shot to fame in 2019 when he came second on Love Island with Molly-Mae, who he has remained in a relationship with since the villa.