Tori Spelling, 47, proves she and her eldest daughter Stella, 12, are the same height as they pose for a photo at home

Tori Spelling posed with two of her four children in photos shared on Sunday.

The Beverly Hills, 90210 actress smiled at Stella who appears to be the same height as her famous mom. 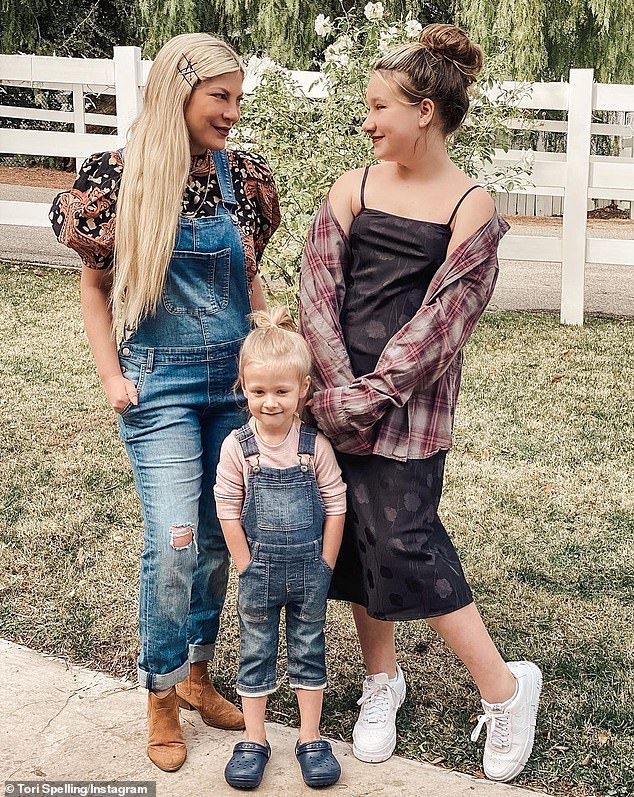 How time flies: On Sunday, Tori Spelling shared a photo to her Instagram account to show that her eldest daughter Stella has grown to match her mother’s height; also seen is son Beau, three 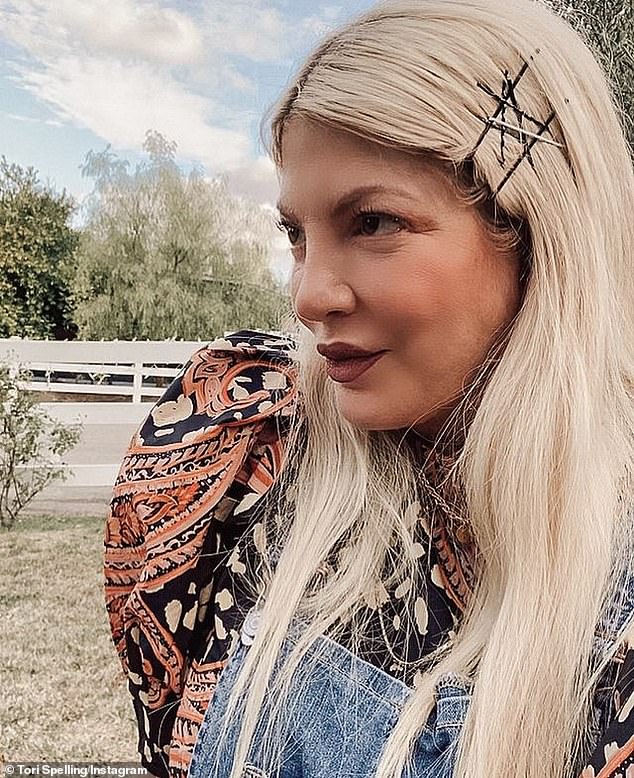 Fancy look: The TV star pinned her blonde hair back as she wore denim overalls

Spelling wore a pair of blue denim overalls, which had been cuffed at the bottom, on top of a floral-design shirt, in addition to a set of brown boots.

The actress allowed her gorgeous blonde hair to hang down past her shoulders during the photo shoot.

Her daughter wore a black graphic printed dress and also kept her arms tucked into an unbuttoned red flannel shirt; she was also outfitted in a pair of white Nike sneakers.

Beau was dressed similarly to his mom as he wore a pair of overalls above a pink long sleeve t-shirt; he finished off his look with blue Crocs. 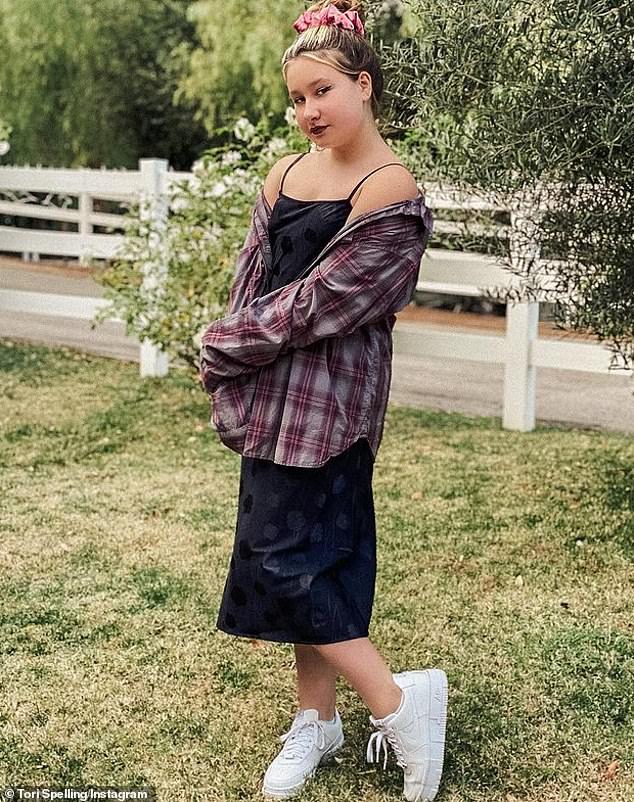 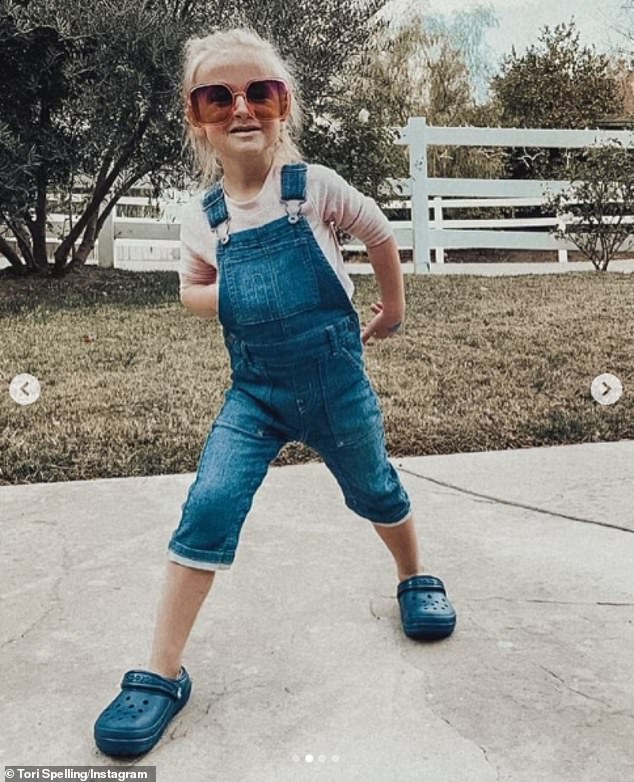 A cute fellow: Her son Beau wore his hair back as he added sunglasses while wearing overalls

She wrote in the caption for the photo: ‘Dear weekend, I love you.’

Spelling shares both Stella and Beau with her husband Dean McDermott, whom she met in 2005.

Spelling is also a stepmother to McDermott’s daughter from his prior marriage.

The actress was previously married to Charlie Shanian from 2004 until 2006. 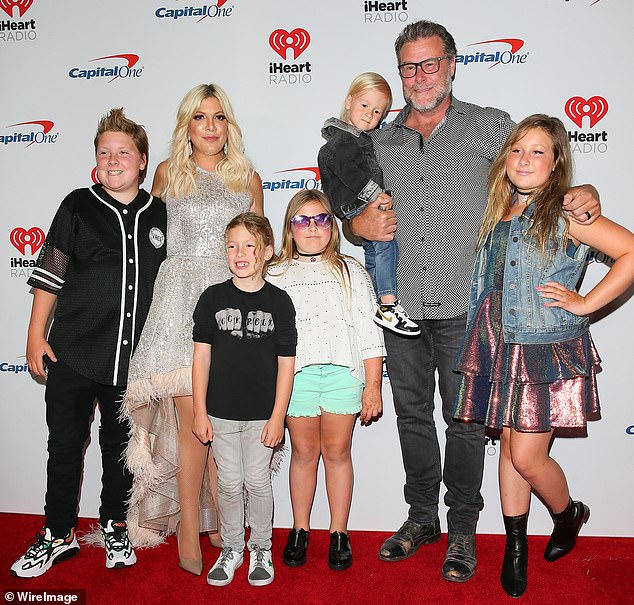 Blended family: In addition to her own five kids, the actress is a stepmother to McDermott’s daughter from a previous marriage; she is shown with her family in 2019

In an interview with Parents, the actress spoke about the stress that comes with having a large family.

Spelling then changed gears and spoke about her enthusiasm for being a mom to many kids.

The actress dished: ‘Seeing them play together, interact together, hug each other, love each other. That’s my favorite part of the day, every day I get to witness that, and I’m so blessed.’ 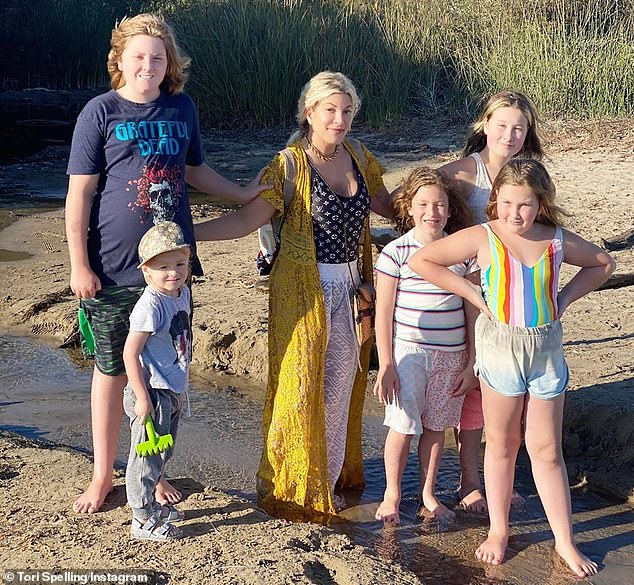 Hard position: During an interview about parenting, Spelling spoke about why mothers are often stressed out, noting that ‘we put so much pressure on ourselves’