Travis Barker's relationship history as he proposes to Kourtney Kardashian 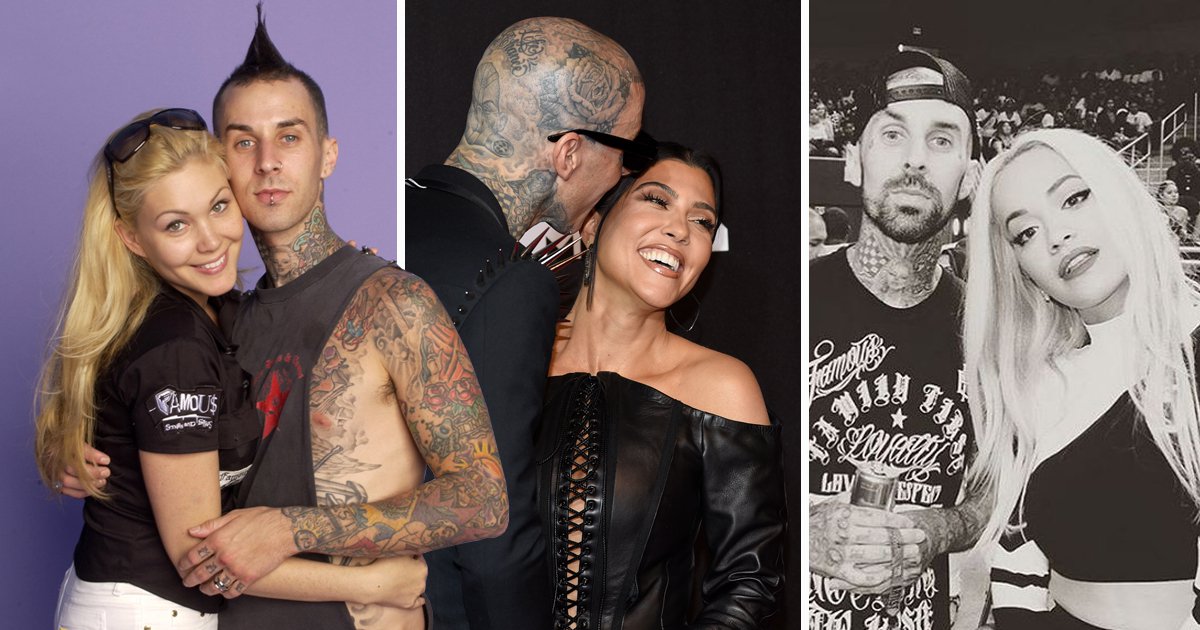 Travis Barker is set to tie the knot for the third time, after proposing to girlfriend Kourtney Kardashian.

The 45-year-old staged a super-romantic proposal on a beach in Montecito, getting down on one knee surrounded by roses in the shape of a heart.

The couple then celebrated their engagement at a dinner with family and friends.

Travis is no stranger to having a romance in the public eye, with his second marriage being the subject of an MTV reality show – so the Hulu cameras won’t be too much of a shock to the system.

Melissa had previously appeared in the 1999 Blink-182 documentary The Urethra Chronicles, and went on to cameo in its follow-up in 2002.

However, the couple filed for divorce less than a year later in August 2002.

Melissa has stayed out of the limelight every since and does not appear to be on social media.

Travis began dating former Miss USA Shanna Moakler that same summer, and they moved fast, as they welcomed their first child together, Landon, in October 2003 after a year of dating.

The couple soon got engaged on the Haunted Mansion ride at Disneyland, and kept to the gothic theme when they got married the night before Halloween in 2004 with a The Nightmare Before Christmas themed wedding.

Travis and Shanna went on to let cameras into their home for MTV’s Meet The Barkers, which ran for two seasons and even documented the birth of their second child, daughter Alabama.

However, the series had a detrimental effect on their relationship, with Shanna writing in Travis’s autobiography Can I Say: ‘I think the show destroyed our relationship. I think he was afraid he was going to be looked on as a reality star. So when the cameras stopped rolling, he distanced himself from me in every way that he possibly could.’

Travis added: ‘felt like having the reality show changed Shanna‘s character. Shanna wanted to be an actress, and I felt she started doing things just for the cameras — for attention, or maybe it was just her dramatic personality. It was turning into a variety show instead of a reality show — and in my mind, she was behaving out of character on camera, which was carrying over to her not being genuine with me.’

The musician filed for divorce in August 2006, but by early 2007, they were back together again.

Following another split, Travis and Shanna packed on the PDA at the MTV Video Music Awards, but they finalised their divorce in February 2008, and although they attempted to rekindle their relationship in 2009, they were done for good that April.

In 2014, both stars were arrested following an altercation in which they both made threats against each other, but in recent years, the exes have confirmed they are on good terms and are co-parenting their children.

Shortly after Travis filed for divorce from Shanna, he briefly dated heiress Paris Hilton, although her publicist later said they were ‘just friends’.

Their fling led to an altercation between Shanna and Paris at a Hollywood nightclub, with both women filing police reports alleging assault – Paris claiming she was punched by the beauty queen, and Shanna alleging she was pushed down some stairs by Paris’s ex Stavros Niarchos.

Travis started dating Rita Ora – the ex of his future fiance’s brother Rob Kardashian – in 2015 after meeting her at the Power 106 All-Star Game in Los Angeles on September 20.

He called the Let You Love Me singer ‘stunning and awesome’, but just three weeks later, they had called it quits, with Travis saying: ‘’I don’t have that ­longing to be in a relationship 24/7.

Travis for friends with KUWTK star Kourtney for years, as they both live in Calabasas with their children, but rumours began swirling in January that their relationship was blossoming as Travis joined the Kardashians on family days out.

They confirmed their romance in February when Kourtney shared a picture of herself holding the drummer’s heavily tattooed hand, and since then, they have been packing on the PDA.

Just weeks after they went public, Travis inked Kourtney’s name on his chest, and the musician credited Kourtney with giving him the courage to take a flight again, 13 years after the fatal plane crash that killed two of his friends and left him with third degree burns.