Unearthed photos of Keanu Reeves, 55, and girlfriend Alexandra Grant, 46, show the couple smiling at one another in a very loving display

His relationship with artist Alexandra Grant came to light on Saturday at the LACMA Art + Film Gala in LA, but the couple have been together since earlier this year.

And in newly unearthed pictures of the pair from back in May, they smile and beam at one another as they put on a loving display.

Keanu, 55, and Alexandra, 46, actually made their red carpet debut at this event, the MOCA Benefit 2019 at The Geffen Contemporary in LA on May 18. 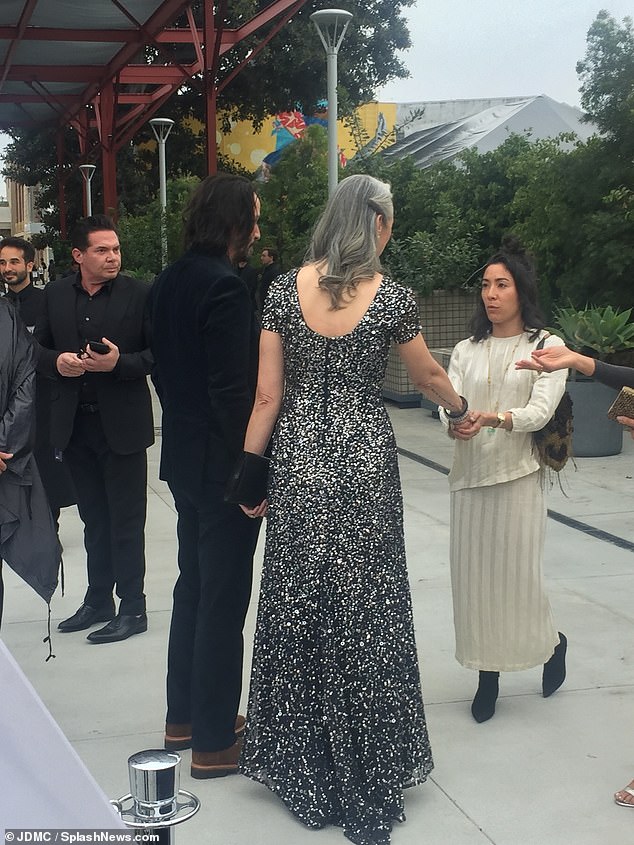 True love? Unearthed photos of Keanu Reeves, 55, and girlfriend Alexandra Grant, 46, put on a very loving display at the MOCA Benefit 2019 at The Geffen Contemporary in LA on May 18 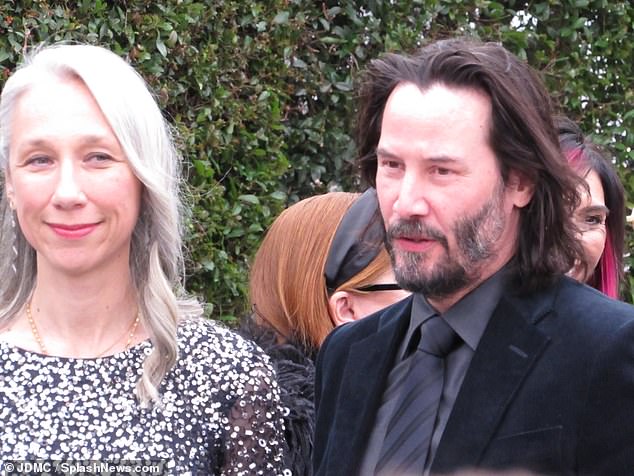 Happy: The couple looked very sweet as they posed alongside one another at the event

The Matrix actor was suited and booted and Alexandra looked beautiful wearing a glittering silver dress.

The pair have been friends for around a decade and it’s been reported that Keanu wanted the romance to be out in the open.

Turns out friendship turned to love just months ago, though People did not nail down an exact month.

‘They started dating earlier this year, but have wanted to keep it quiet,’ a source told the site. 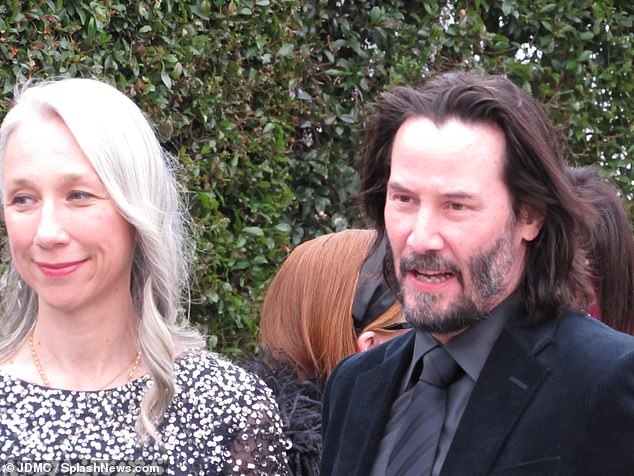 A source has said: ‘They started dating earlier this year, but have wanted to keep it quiet’

‘Keanu wants to openly share his life with her. He is extremely happy and grateful to have Alex in his life.’

In June at the Saint Laurent Men’s Spring Summer 20 show held at Paradise Cove Beach in Malibu, the two held hands for the cameras.

By mid October she was pictured resting her head on his shoulder while clasping his arm as they left a restaurant in Hollywood. 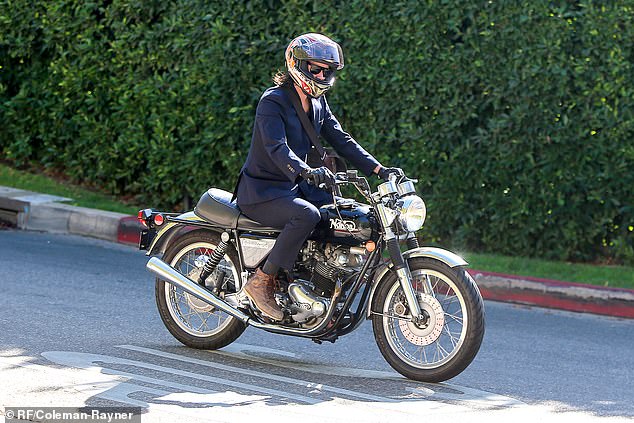 Va va voom: Keanu was pictured riding his motorbike on Monday in his suit and brown boots

They were then seen enjoying dinner at Giorgio Baldi, a luxurious Italian hotspot, in Santa Monica, California.

The couple first collaborated in 2011 on Reeves’ book Ode to Happiness, with Grant providing the illustrations. The project was her first artist book and Reeves’ first book as a writer.

They worked together again on the actor’s 2016 book, Shadows, in which Grant again provided the illustrations. 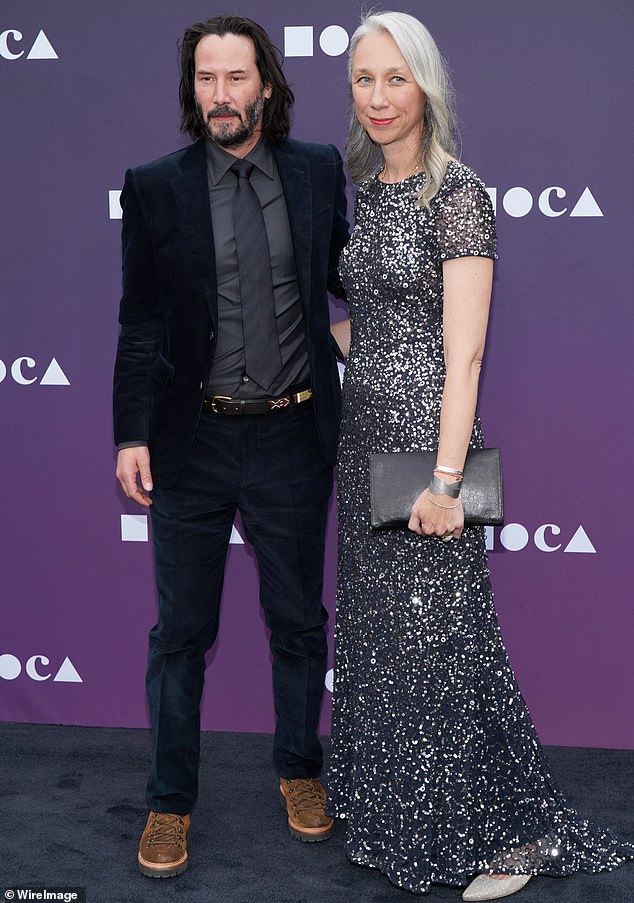 Close: The two placed their arms around one another as they posed on the purple carpet together

On Saturday, Keanu made it obvious he was more than friends with Alexandra as he held her hand while on the red carpet and shot her loving looks.

A source told ET: ‘They were smiling and having a good time.’

Swarthmore College graduate Grant is a Los Angeles-based artist, who uses language and exchanges with writers as a source for imagery in sculpture, painting, drawing, and video.

Her work is in public collections including the Los Angeles County Museum of Art (LACMA) where the couple were spotted on Saturday.

The actors have both admitted they had a crush on one another during filming for the 1994 movie, but have insisted they have never dated.

In the 80s Keanu dated Jill Schoelen for three years after meeting on the set of the 1986 film Babes in Toyland,

Keanu was also spotted out and about with director Sofia Coppola in the early nineties, after they fell for each other on the set of Bram Stoker’s Dracula which Sofia’s father Francis Ford Coppola directed. 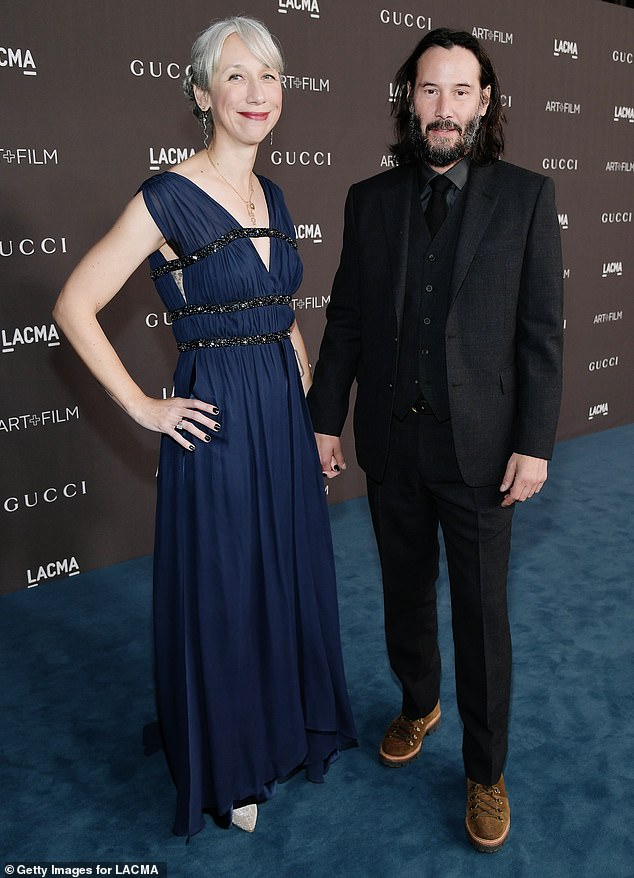 New love: The couple made the rare move of holding hands at the LACMA Art + Film Gala in Los Angeles on Saturday 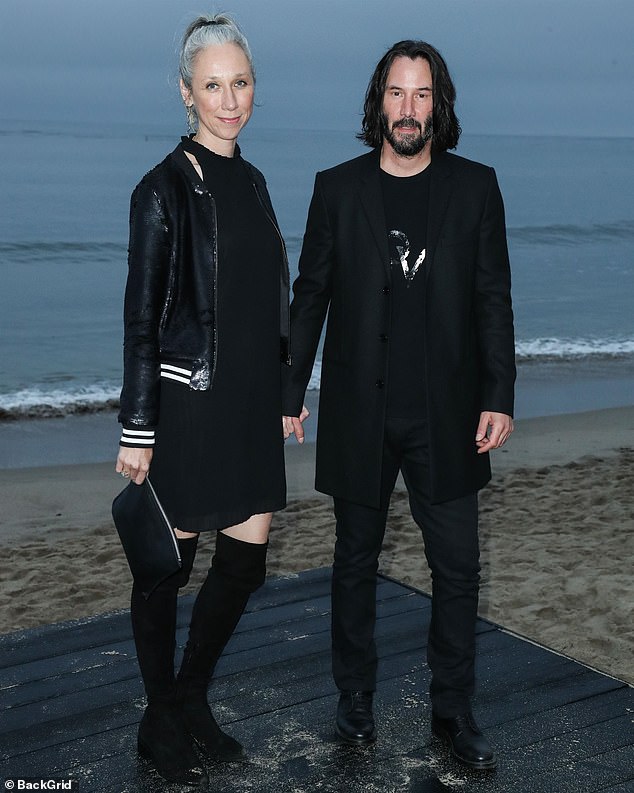 Going public: And in June at the Saint Laurent Men’s Spring Summer 20 show held at Paradise Cove Beach in Malibu, the two held hands for the cameras 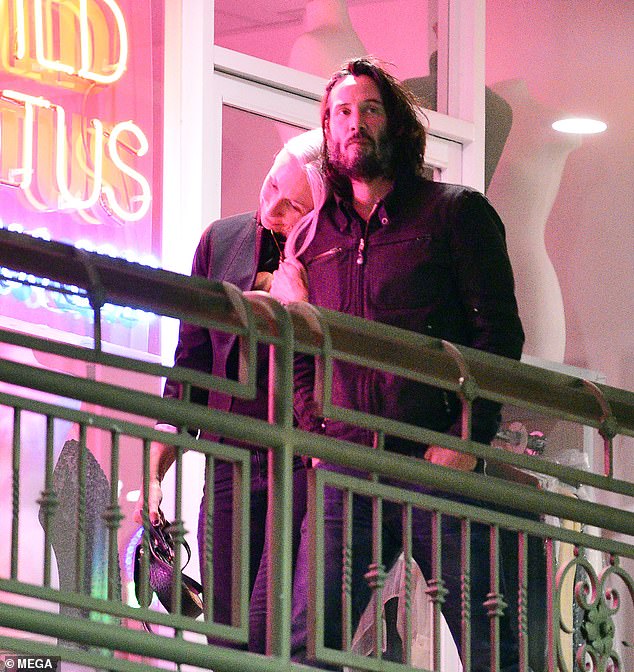 Another sign this was serious: In mid October she was pictured resting her head on his shoulder while clasping his arm as they left a restaurant in Hollywood 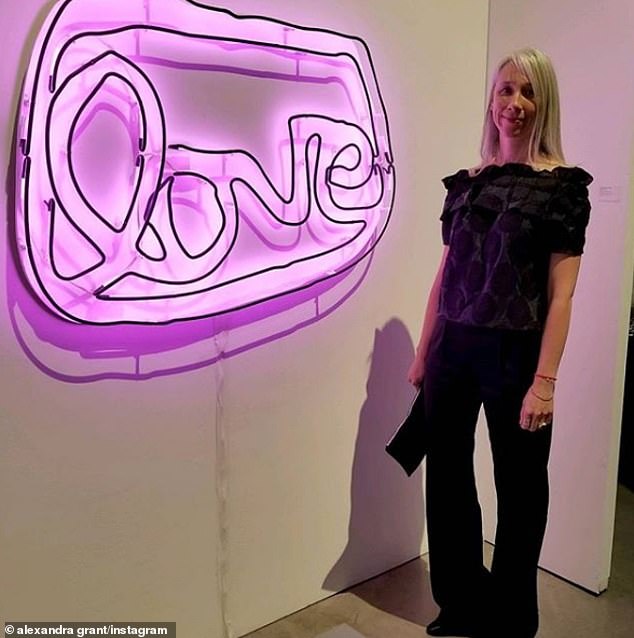 Hip chick: Swarthmore College graduate Grant is a LA-based artist, who uses language and exchanges with writers as a source for imagery in sculpture, painting, drawing, and video 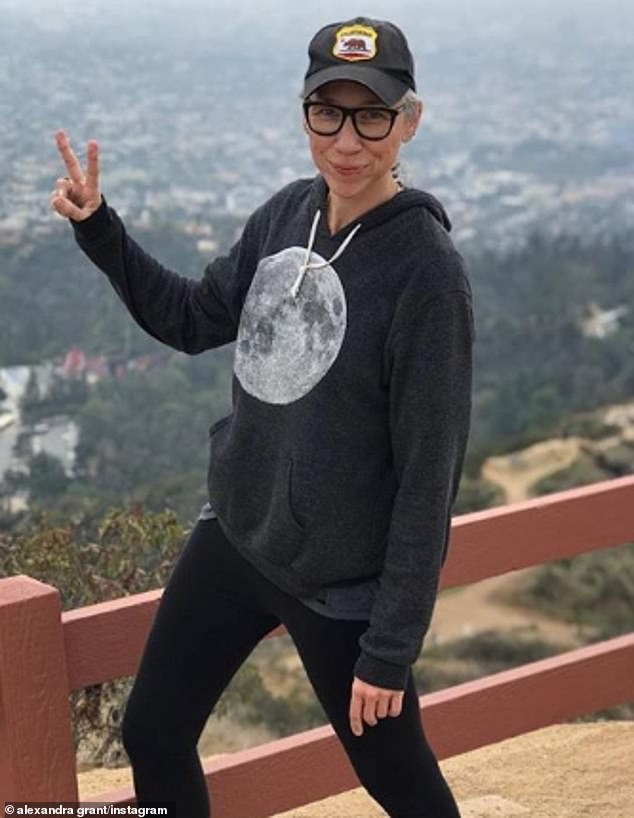 Peace out: Here the star was seen hiking the Hollywood trail in a photo shared to social media

Reeves’s most significant relationship was with actress Jennifer Syme. They began dating in 1998 and, in 1999, Syme became pregnant with their daughter, Ava.

In 2001, Syme drove her 1999 Jeep Grand Cherokee into a row of parked cars in Los Angeles; she died instantly. She was only 28-years-old at the time. 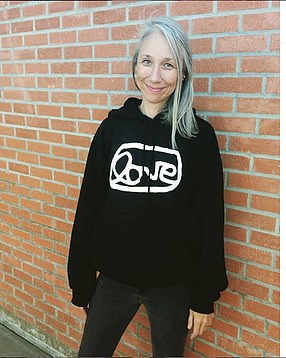 Based in Los Angeles, Alexandra Grant is an artist and philanthropist. Born in Ohio, Alexandra has been working in the arts since graduating from Swarthmore College in 1994 with a BA in history and studio art.

The artist, 46, is known for her use of language and exchanges with writers as a source for imagery in her sculpture, painting, drawing, and video works.

The talented artist fostered her love for the spoken word as a child, after growing up around the world, living in Mexico, Spain and France.

She has exhibited at prestigious spaces around the world including Los Angeles County Museum of Art (LACMA), Galerie Gradiva in Paris and The Harris Lieberman Gallery in New York.

In 2008 Alexandra founded the philanthropic grantLOVE project which produces and sells original artworks and editions to benefit artist projects and arts non-profits.

Alexandra and Keanu have a history that goes back years, first collaborating together on a grown-up’s picture book, Ode to Happiness, in 2011.

The book was a success, sparking the poet-artist duo to create their second book together, Shadows, in 2016, with Grant photographing Reeves while he was filming John Wick.

Since then, the two have been spotted together at art galleries, book signings, posed for Vogue Spain and even traveled to Germany to work together.

Speaking of working together on their second book, Grant told W Magazine: ‘We can spend a lot of time debating. Like, ‘A raspberry hue? And should it be darker?’ We can get obsessive.’

Shadows is compiled of dark silhouette images of Reeves taken by Grant and poetry written by the Matrix actor.

Grant told the LA Times of her collaborator: ‘No one can move the way he can. He’s a really extreme performer.

‘That’s a huge piece of why those images are so interesting. I knew that if I moved the camera as we danced together, as photographer and subject, we could create these wonderful optical illusions.’

The two founded publishing company X Artists’ Books in 2017, with a focus on ‘unusual collaborations’ and books that ‘don’t really have a place because they’re between genres’.