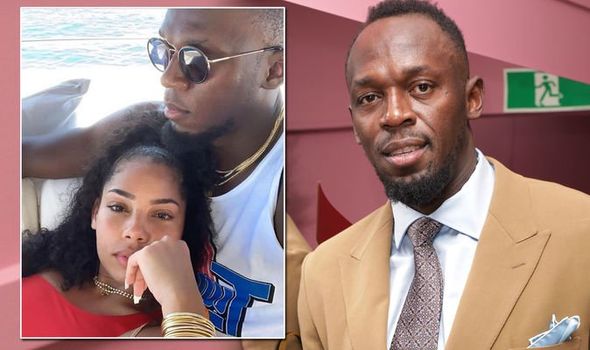 Usain Bolt, 33, took to social media today to announce he is expecting his first child with partner Kasi Bennett.

The Jamaican athlete shared the exciting baby news on his Instagram account this morning alongside an incredible picture of his pregnant partner.

He told his 9.3 million followers: “I just want to say a KING or QUEEN is about to be HERE. @kasi.b”

In the picture, posted by the eight-time Olympic gold medallist, Kasi can be seen cradling her baby bump in a billowing red dress on the beach.

Taken at sunset, the stunning snap perfectly showcased the beauty and her burgeoning bump.

Her glamorous halter neck gown featured a thigh-grazing split on one side, which highlighted her toned pins as she posed for the pictures.

Wearing her hair swept away from her face in a sleek style, the mum-to-be completed her look with a pair of stylish drop earrings.

I just want to say a KING or QUEEN is about to be HERE. @kasi.b

Sharing more pictures from the photoshoot on her own Instagram account, Kasi described her pregnancy as “Our biggest blessing…” and also “Our greatest celebration.”

A third post, shared with her 288,000 followers shortly after, announced: “Our golden child Coming soon…”

The couple have been to together for several years and tend to keep their relationship out of the spotlight.

The former sprinter, who retired from athletics in 2017, confirmed their romance in 2016.

On the father-to-be’s post, Instagram users, fans and friends rushed to the comments section to congratulate the couple.

Model and former Miss Jamaica Yendi Phillips, 34, penned: “Congratulations to you both!!”

Following a successful career which saw him become the only sprinter to win Olympic 100m and 200m titles at three consecutive Games, Usain trained to become a professional footballer.

However, not long after – in January 2019, he announced he was stepping back from the sport.

At the time he said: “It was fun while it lasted,” before adding: “The sports life is over, so I’m now moving into different businesses.”