She was lauded for her sleek style at Saturday’s lavish nuptials between her eldest son Brooklyn and Nicola Peltz.

And jewellery experts have revealed to MailOnline that Victoria Beckham, 47, completed her mother-of-the-groom wedding look with a necklace worth an estimated £2million.

Kyron Keogh, co-founder of ROX Diamonds & Thrills, has assessed that the show-shopping pear-cut diamond pendant was possibly 15 carats in total. 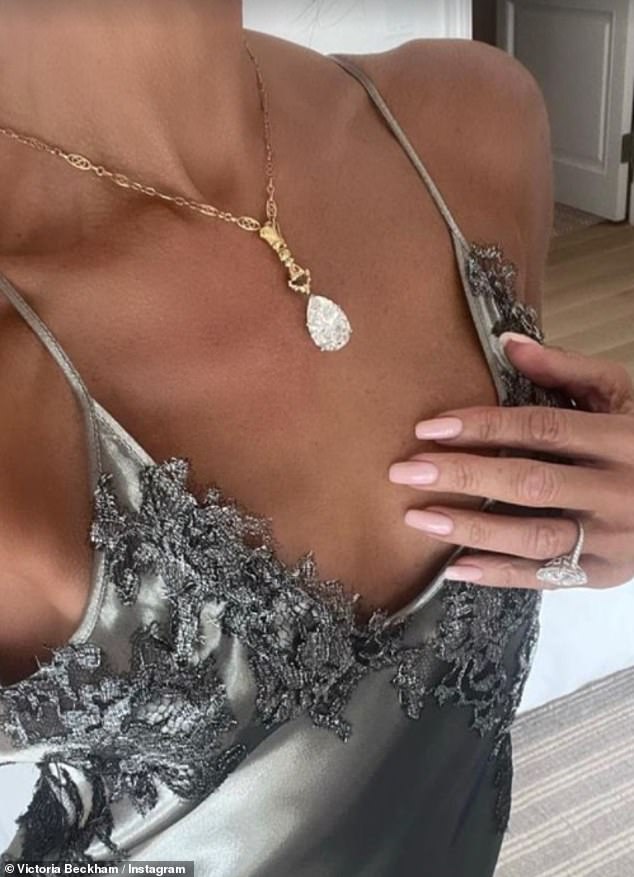 Wow! Jewellery experts have revealed to MailOnline that Victoria Beckham, 47, completed her mother-of-the-groom wedding look on Saturday with a necklace worth an estimated £2million

Kyron told MailOnline: ‘Victoria is wearing an ornate 18ct yellow gold necklace with a pear-cut diamond that looks like its 12cts -15cts.

‘The whiteness of it indicates great clarity and so it could be worth £1.3- £2million.’

For those who don’t quite have the VB budget, ROX have a Diamond Drop Necklace for £1,295, featuring an elegant pear shaped pendant with a double row of 63 brilliant cut diamonds (weighing a total of 0.69carats). 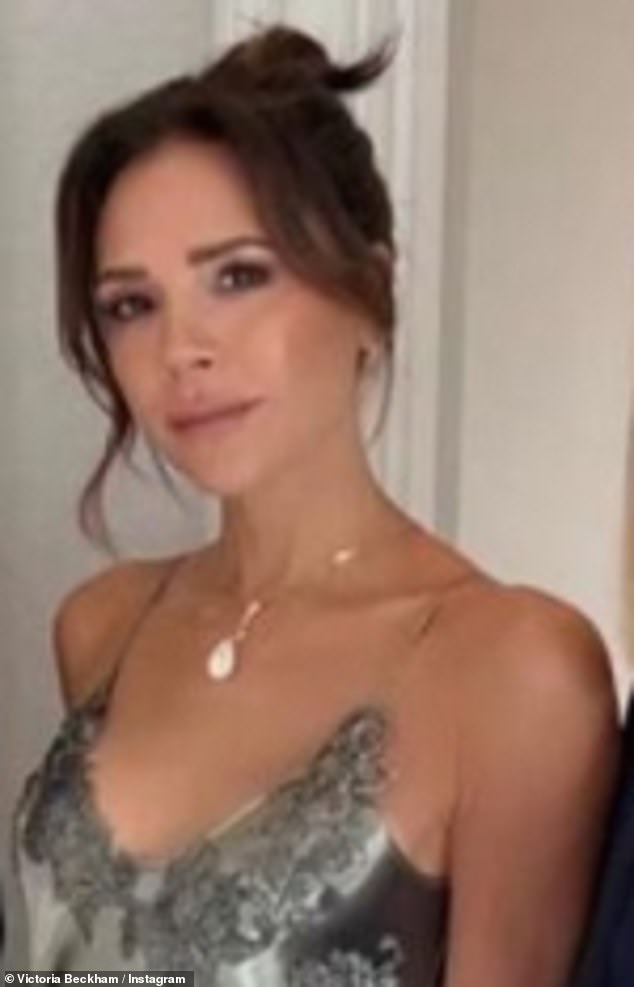 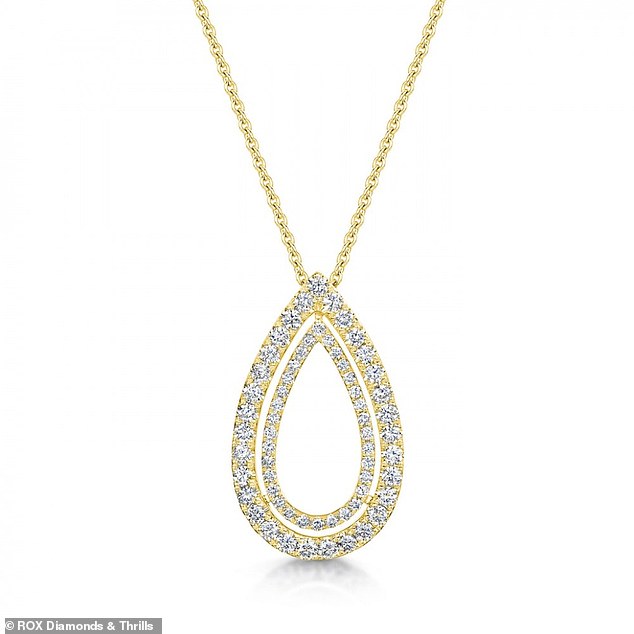 Recreate the look: For those who don’t quite have the VB budget, ROX have a Diamond Drop Necklace for £1,295, featuring an elegant pear shaped pendant

The dress was created in the star’s fashion brand’s London atelier and was the first couture gown created by the brand, taking five days to create by six of her London atelier team.

The fabric was developed by one of Victoria’s favourite fabric mills in Lake Como, Italy, and was inspired by the reflection of the moonlight on the ocean.

Victoria also revealed the intricate lace on the gown was created by intertwining three French laces.

The attention-garnering photograph spotlighted Victoria’s immaculate makeup and classy coiffure, which saw her sport a bun with several loose waves around her face.

Meanwhile, father-of-the-groom, David, not unsurprisingly, complemented his glowing wife to a tee as he decked out in Dior, rounding off his crisp suit with a bow tie. 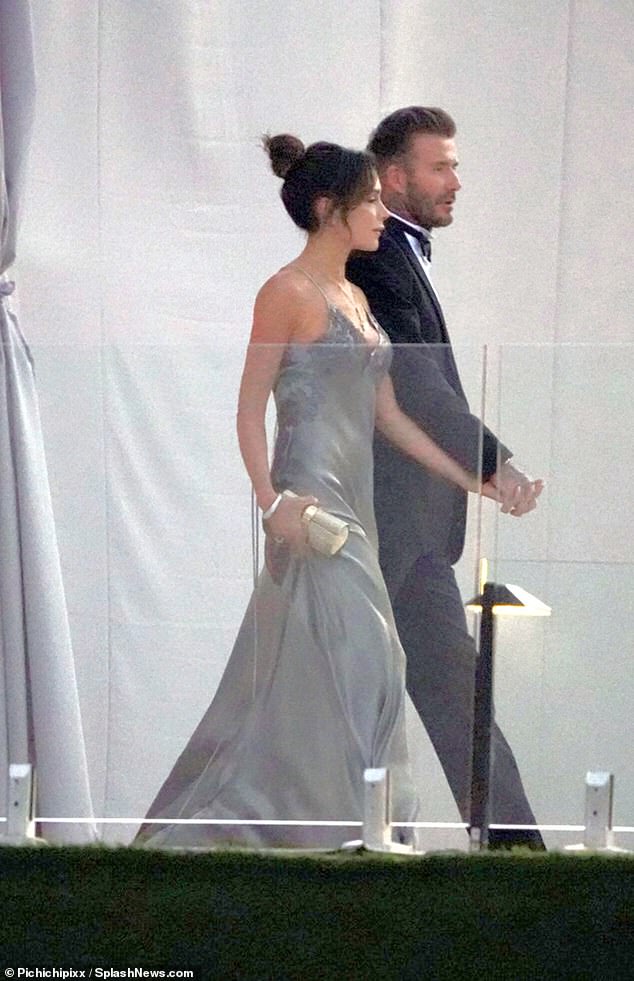 Fashion forward! Victoria took the reigns with her elegantly effortless look on Saturday, stunning in a slip dress, while David, 46, complemented his glowing wife by wearing Dior

Message: VB broke her social media silence after the wedding on Monday – but used the titles ‘Mr and Mrs Beckham’ rather than the couple’s new surnames, Peltz-Beckham

Victoria broke her social media silence after the wedding on Monday – but failed to mention her son’s new name as she wrote: ‘Proud mum and dad. Congratulations Mr & Mrs Beckham.’ 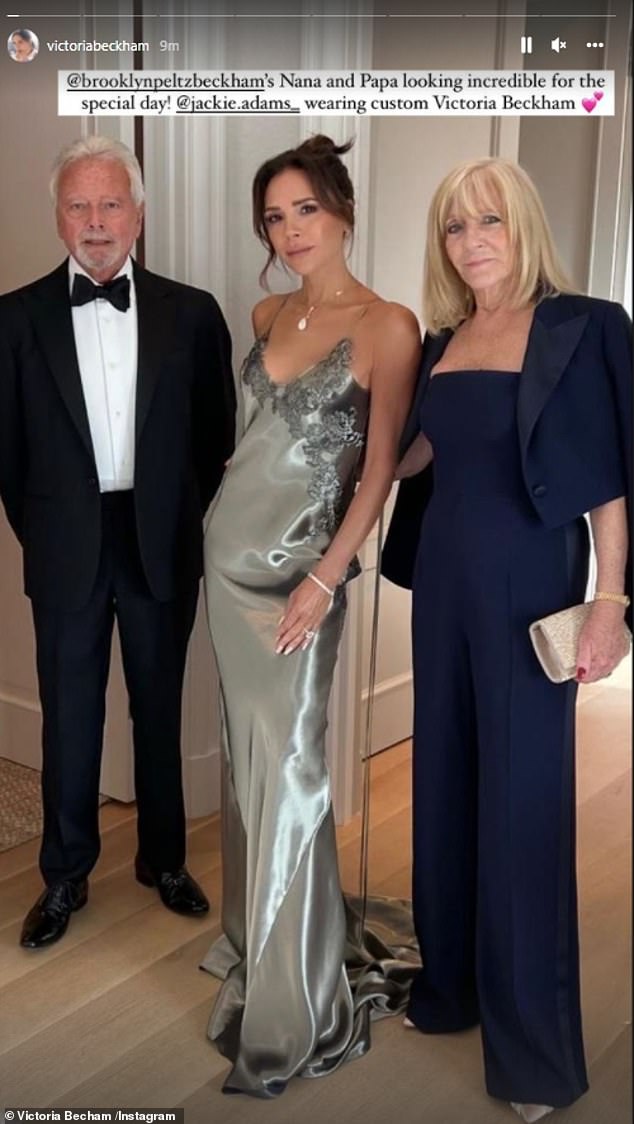 There she is: Victoria posed with her parents Jackie and Tony Adams in some fun snaps 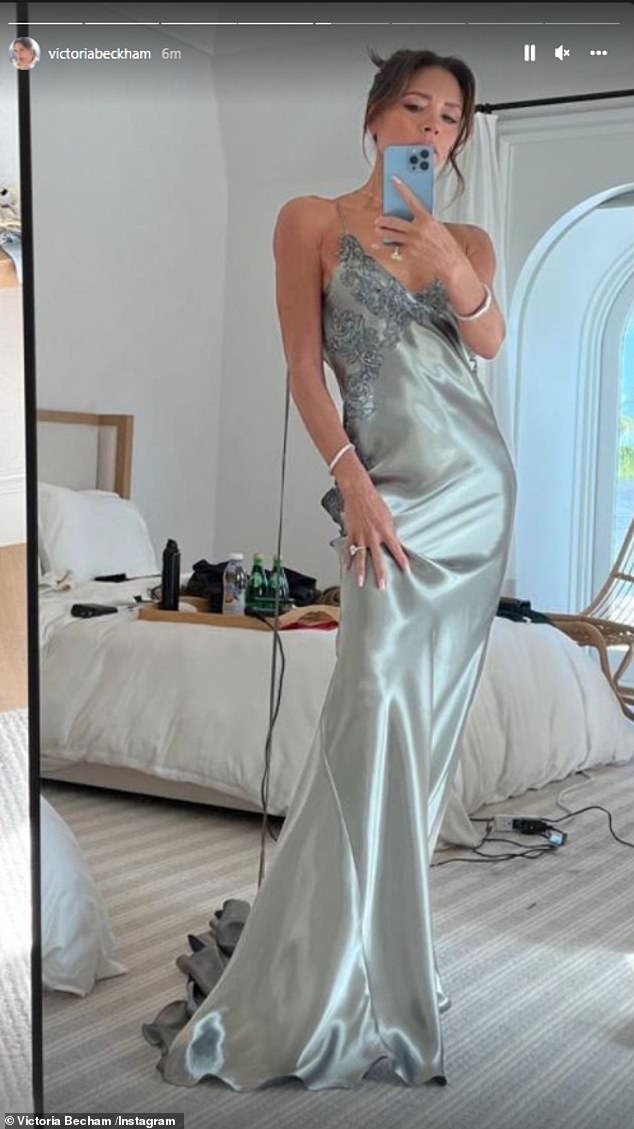 Stunning: The beauty revealed the material for the dress was developed in mills in Milan 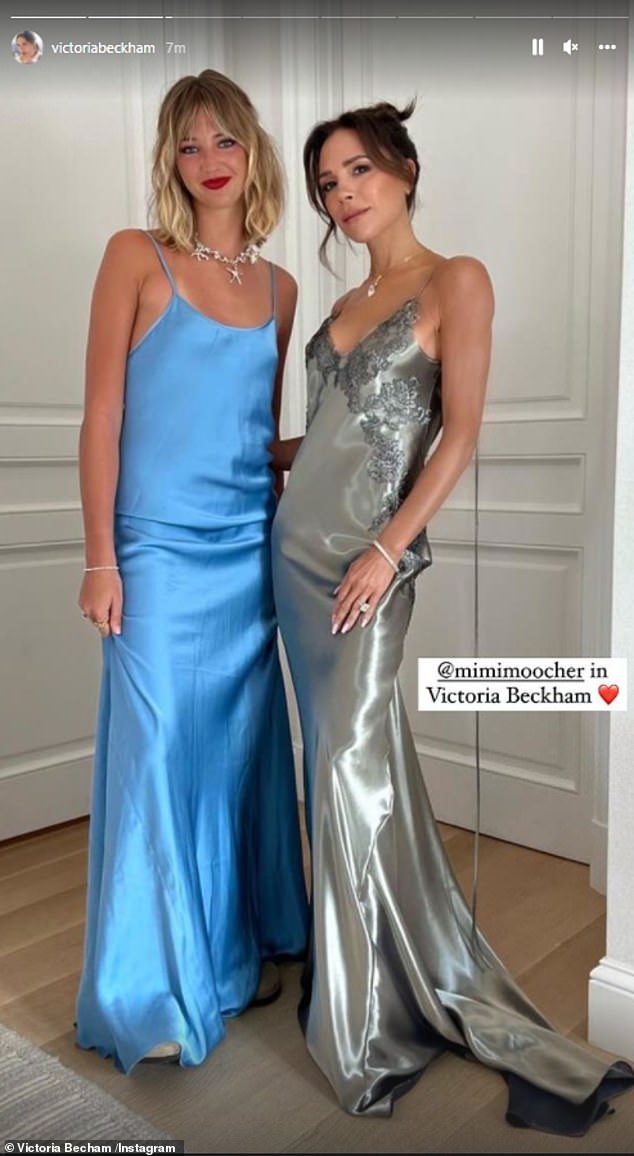 Former Manchester United and England star David gave a heartfelt speech as his son, 23, tied the knot with wealthy actress Nicola, 27, during a stunning ceremony at her family’s glitzy seafront estate in Palm Beach, Florida.

As part of his duties as father of the groom, the retired footballer gave a five minute speech about his son and his new wife, also recalling a special time during the first few moments of his life – leaving everyone, including himself, misty eyed.

Sources claim he had to ‘stop to take a breather’ and also found time to praise his daughter-in-law – calling the billion dollar heiress ‘incredible’. 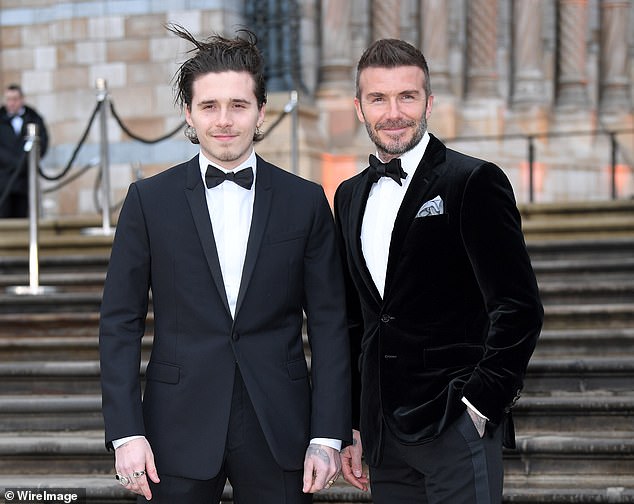 A source told The Sun: ‘David’s speech went on for about five minutes and he looked to shed a tear at one point. He was talking about when Brooklyn was born and how he wanted to protect him.

‘He said he was sleeping on the hospital floor, holding the door shut because he didn’t want to let anyone get in. David got a lump in his throat and had to stop and take a breather to regain his composure, but it was a very sweet speech.’

Following the speeches, everyone was served special cocktails whilst a jazz quartet and a 12-piece live band provided the entertainment. 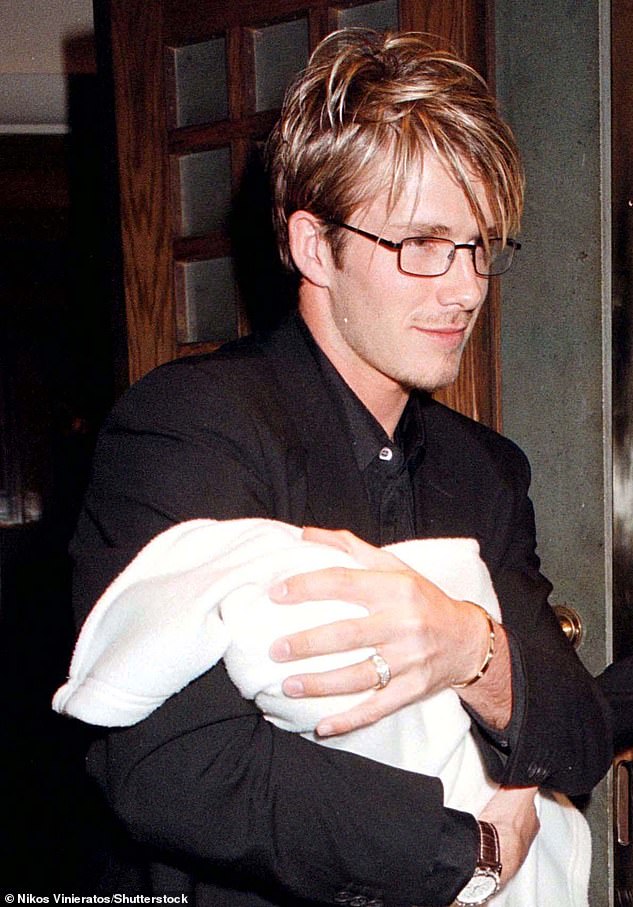 Old times: Former Manchester United and England star David gave a heartfelt speech as he recalled the moment Brooklyn was born (pictured with his eldest son in 1999)

Brooklyn and new bride Nicola later invited their wedding guests to donate to support Ukraine as it continues to resist the ongoing Russian invasion.

According to Vogue, the crisis in Ukraine wasn’t far from their minds as they celebrated their special day with a star-studded guest list over the weekend.

It’s understood that Brooklyn and Nicola partnered with humanitarian agency Care, and invited their guests to contribute to the efforts by the agency to support and provide aid for women, girls, families and the elderly in the war-torn country. 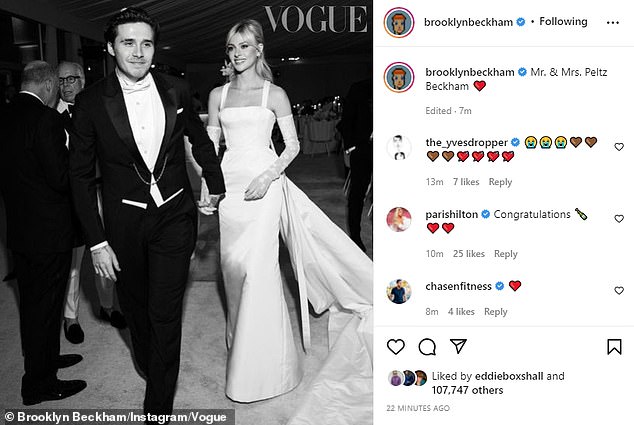 The bride’s parents, Claudia and financier Nelson – who is worth an estimated $1.7billion – were among those who made a significant donation to the cause.

Brooklyn shared the very first photo from his wedding to Nicola on Sunday, after they exchanged vows at her billionaire father Nelson’s $103m (£79m) estate.

The aspiring chef shared the snap which saw his bride wow in a stunning Valentino white dress adorned with an evil eye symbol, with the accompanying caption: ‘Mr. & Mrs. Peltz Beckham.’ 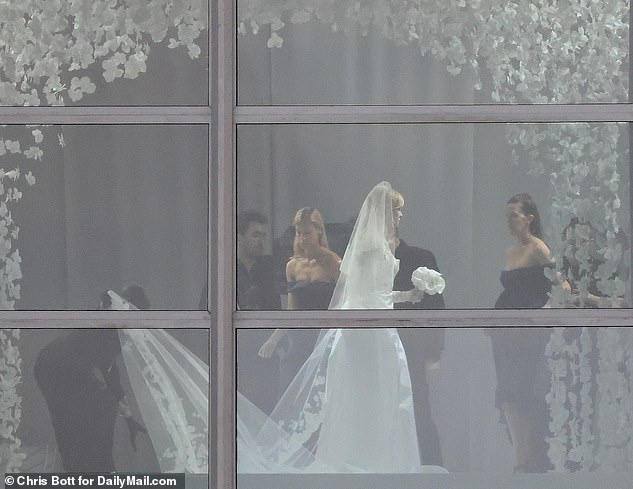 Gorgeous: Nicola stunned in an incredible Valentino bridal gown as she posed for her wedding photos after marrying Brooklyn – exclusive DailyMail.com pictures revealed