What pandemic? Victoria’s Secret attempts to overhaul image with new inclusive campaign featuring Helena Christensen, a plus size model and trans star… while the rest of the world gets to grips with global health crisis

Victoria’s Secret has a new look for 2020 after a string of bad media that caused their annual lingerie show to be canceled and several stores to close in 2019.

This new campaign is inclusive with veterans over 50, curvier beauties and a trans star mixed in with some of the A list catwalk queens of the day.

And the shoot was photographed by a woman: Nineties supermodel Helena Christensen, 51, who also models for the brand.

But as the world struggles to come to grips with the global coronavirus pandemic, the timing of the campaign may do little to improve the brand’s reputation for being out of touch. 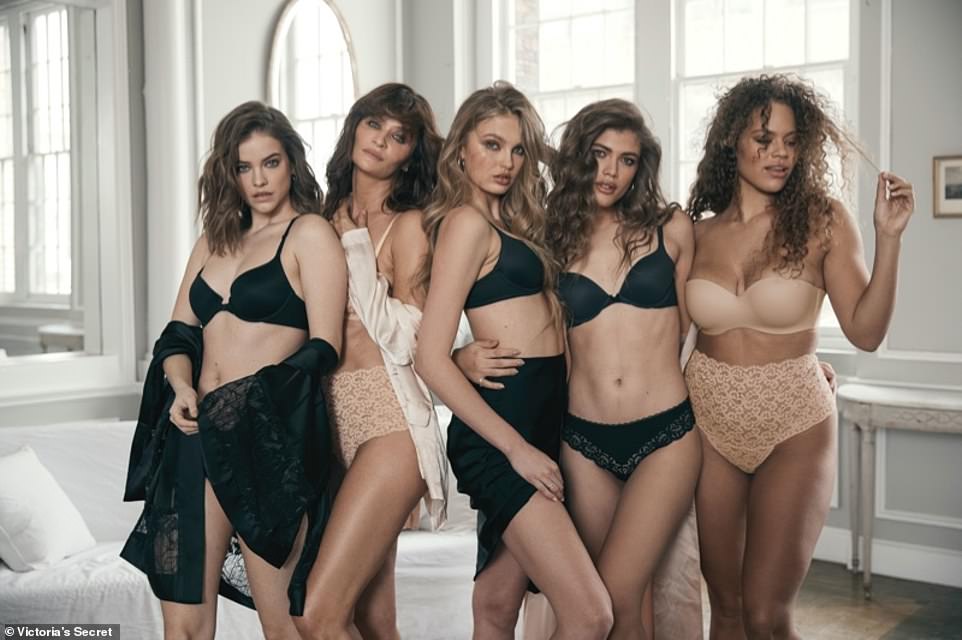 The new look: Victoria’s Secret has a new look for 2020 after a string of bad media that caused their annual lingerie show to be canceled. This new campaign is inclusive with older models, curvier models mixed in with some of the A list catwalk queens of the day

The lineup includes plus size model Candice Huffine and the more natural looking Solange van Doorn. There is also a trans model in the mix, the stunning Valentina Sampaio.

In the past, VS only used incredibly thin bombshell models such as Alessandra Ambrosio, Elsa Hosk, and Gisele Bundchen. 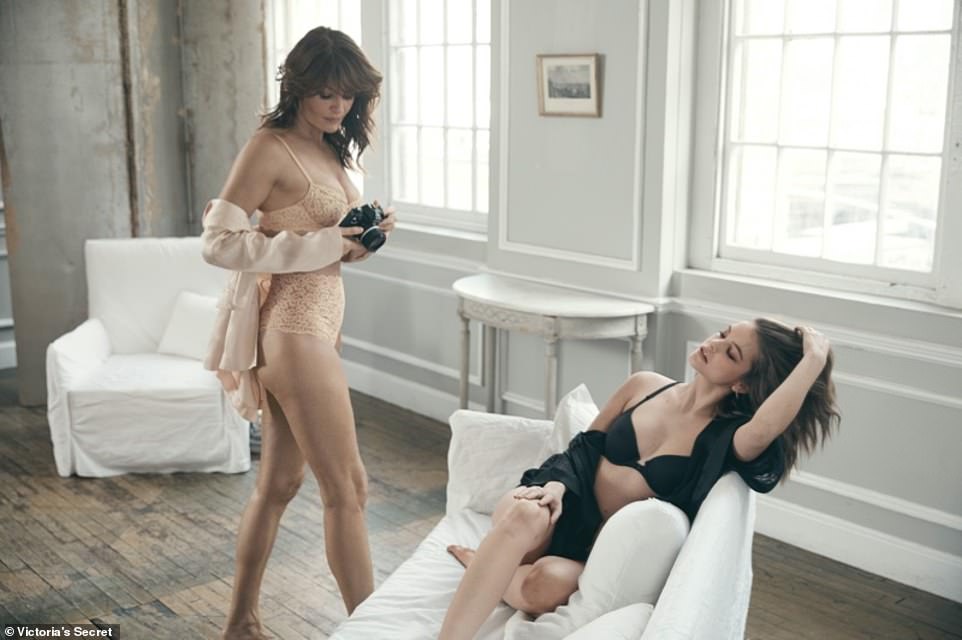 A woman in charge: And the campaign was photographed by a woman: veteran supermodel Helena Christensen, 51, who also models for the brand

The company has been trying to become more diverse after Rihanna’s more body accepting brand Savage x Fenty took off. Also nipping at their heals is Kim Kardashian’s SKIMS brand which comes in sizes up to 4X.

VS has hired plus sized models, transgender models in the past year.

The changes came after the departure of longtime chief marketing officer Ed Razek, who faced backlash in November 2018 after he told Vogue that trans and plus-size models weren’t right for the Victoria’s Secret Fashion Show.

‘We attempted to do a television special for plus-sizes [in 2000]. No one had any interest in it, still don’t,’ he said. ‘I don’t think we can be all things to all customers. It is a specialty business; it isn’t a department store.’ 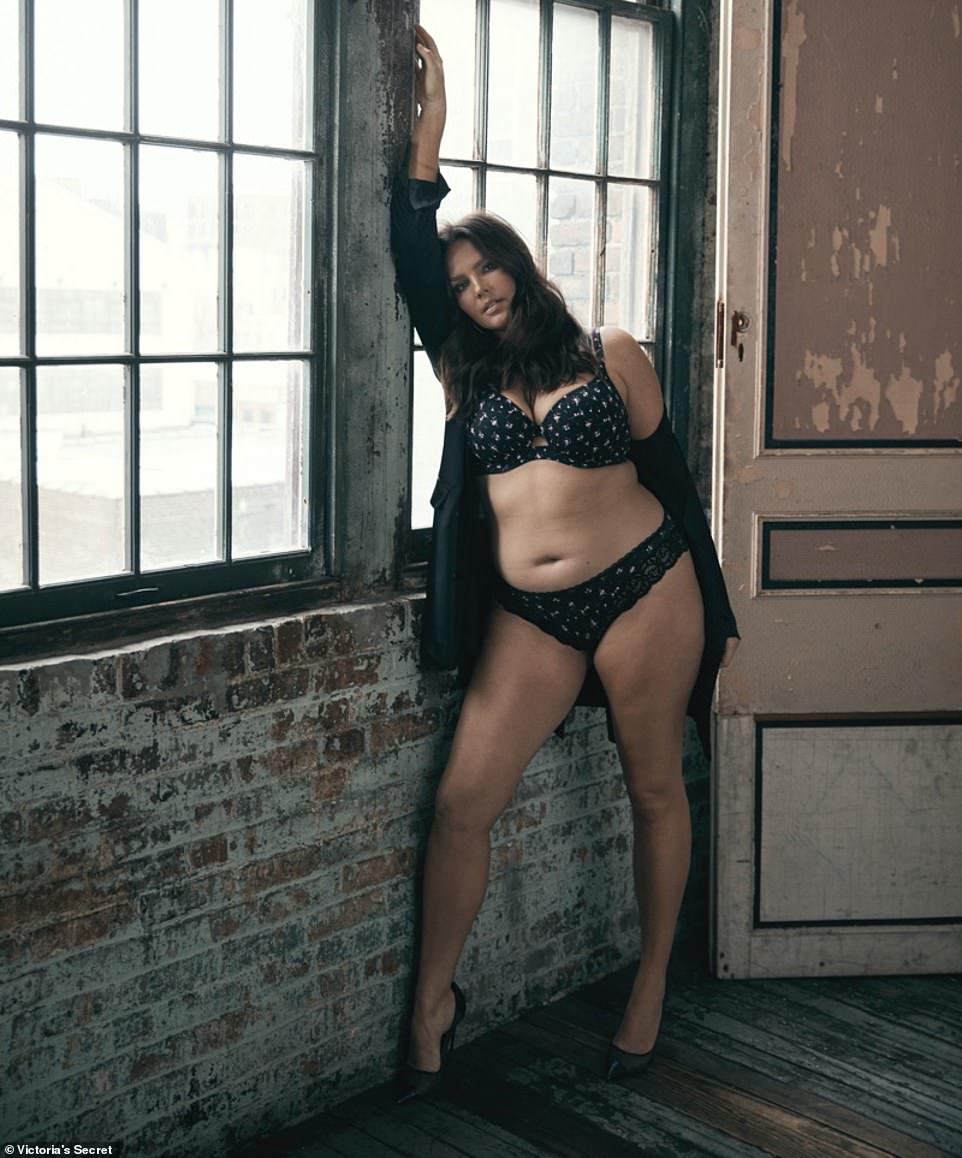 Razek apologized for the gaff later, but not before ThirdLove founder Heidi Zak seized on it with a scathing full-page ad in the New York Times.

‘You market to men and sell a male fantasy to women,’ Zak wrote. ‘Your show may be a “fantasy,” but we live in reality… We may not have been a woman’s first love, but we will be her last.’

Three months later, executives for L Brands, the lingerie brand’s parent company, announced that it was closing as many as 53 Victoria Secret stores across the US in 2019. 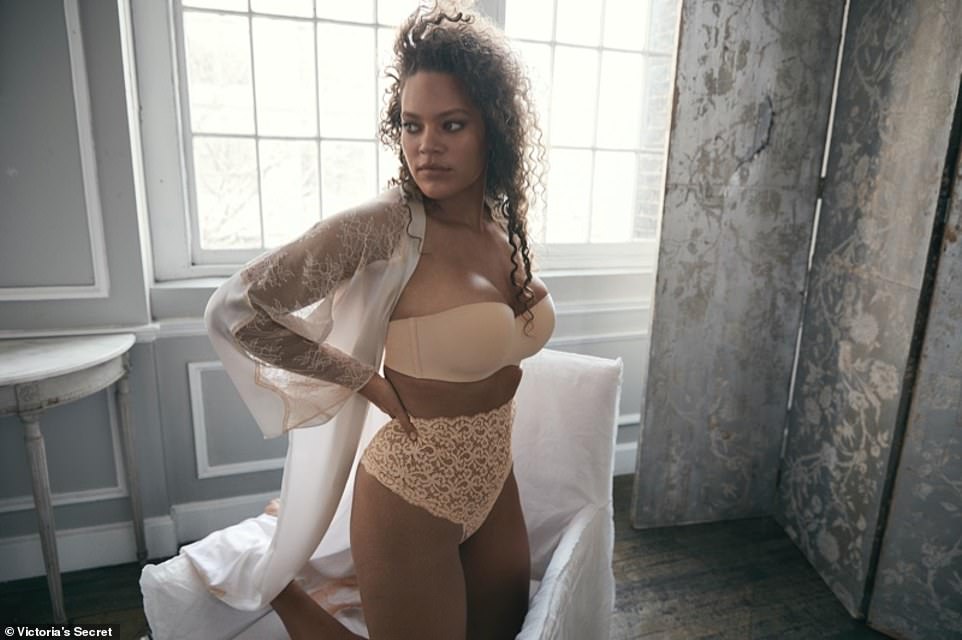 Stunning in pink: And also there is the more natural looking Solange van Doorn

TV ratings for the annual Victoria Secret Fashion Show also fell to a historic low of just 3.3 million in 2018, down from a high of more than 10 million viewers in 2011, according to a February 13 report from CNBC. 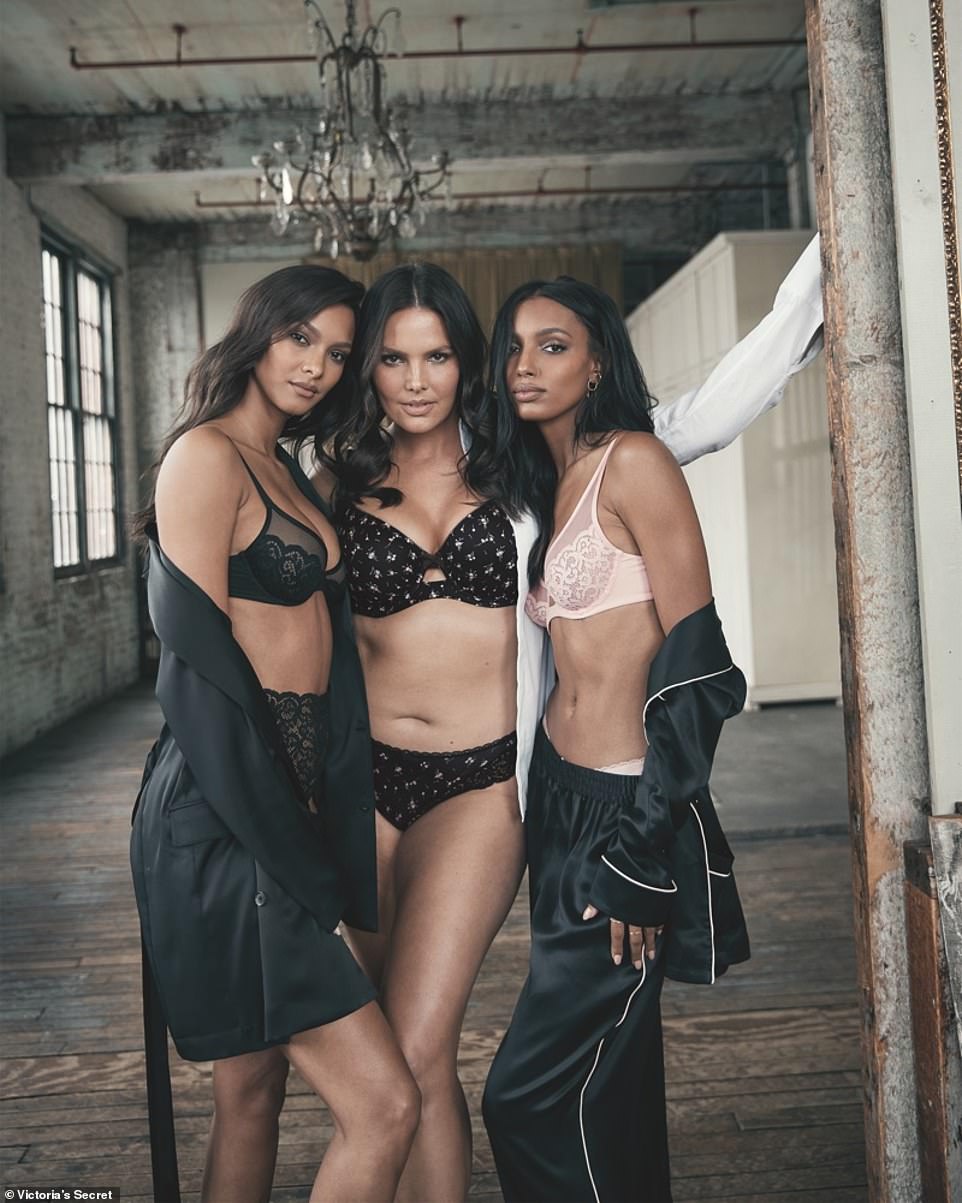 The new items: The company has been trying to become more diverse after Rihanna’s more body accepting brand Savage x Fenty took off

Making things worse, the brand has been linked to the late billionaire pedophile Jeffrey Epstein.

A string of women came forward to reveal how they were lured into Epstein’s clutches by the promise of work with Victoria’s Secret.

Epstein had a friendship with the boss of Victoria’s Secret, a man called Les Wexner, 82, founder and chief executive of parent company L Brands, and whose friendship Epstein exploited.

Many believe it was through their relationship that Epstein gained a foothold in the world of the rich and famous. 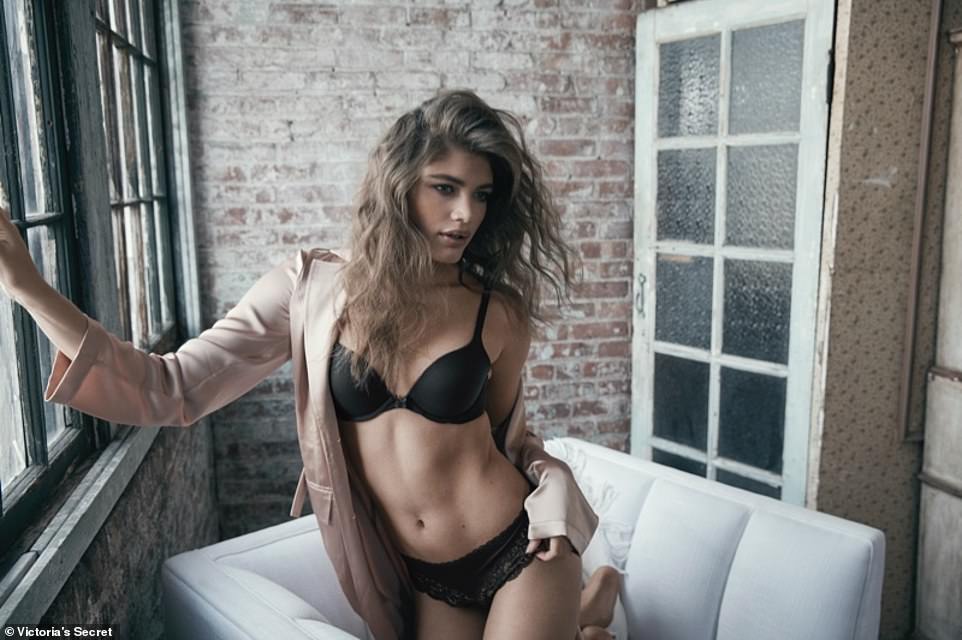 And then there are the supermodels: And there is also Daniela Pestova, Valentina Sampaio (pictured), Joan Smalls,, Babara Palvin, Jasmine Tookes, Lais Ribeiro and Romee Strijd.

Note, for example, that the now infamous seven-storey Manhattan mansion where Prince Andrew was photographed visiting in 2010, two years after Epstein was convicted for procuring underage girls for sex, was originally Wexner’s.

And it seems even Epstein’s apparent pimp and close friend of Prince Andrew, Ghislaine Maxwell, would lure young women into Epstein’s web by boasting of his links to Victoria’s Secret.

In August, Epstein committed suicide in jail where he was awaiting trial for sex trafficking. But despite his death, repercussions from his sick lifestyle continue to reverberate.

Wexner has insisted he was unaware of Epstein’s crimes, and cut ties with him as soon as he found out about them. 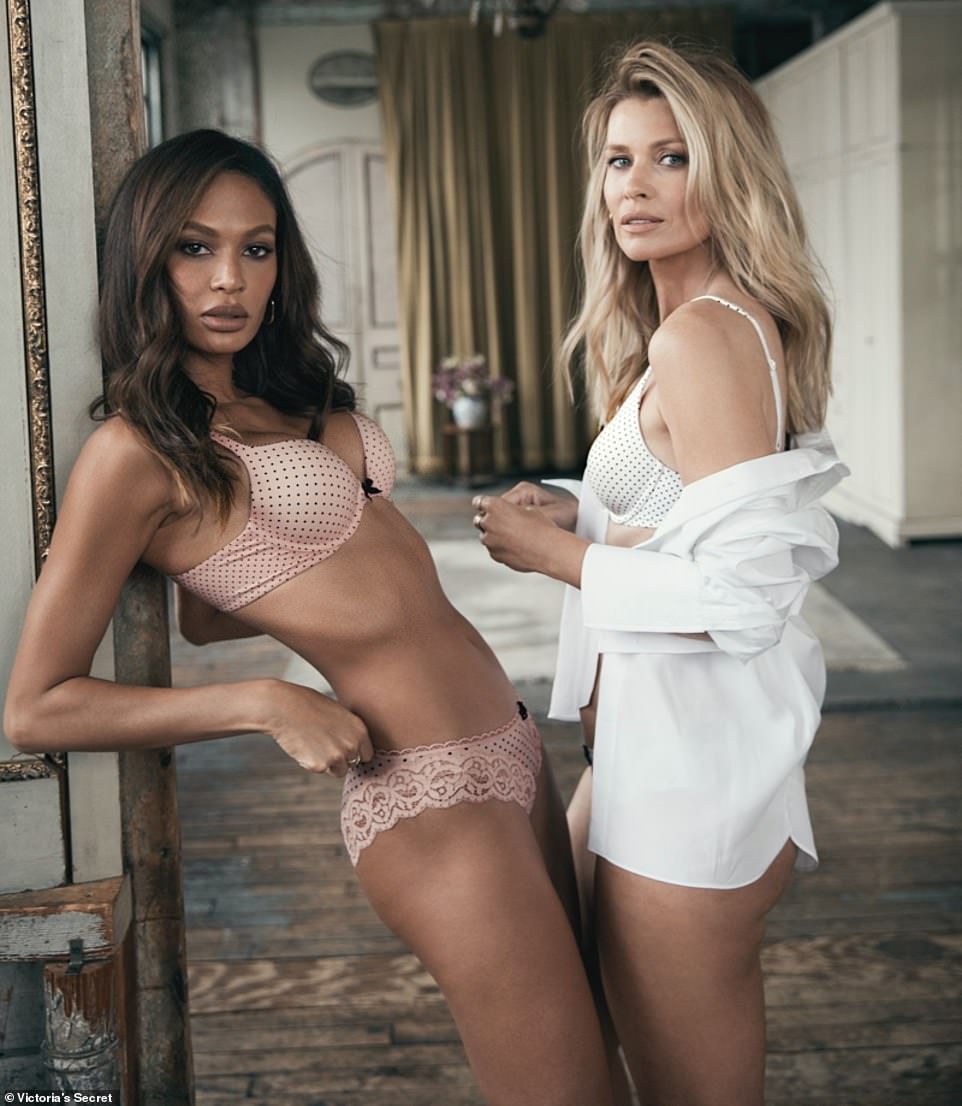 A move to stand with the times: The company has had a tough time, but with their new identity they may be able to compete 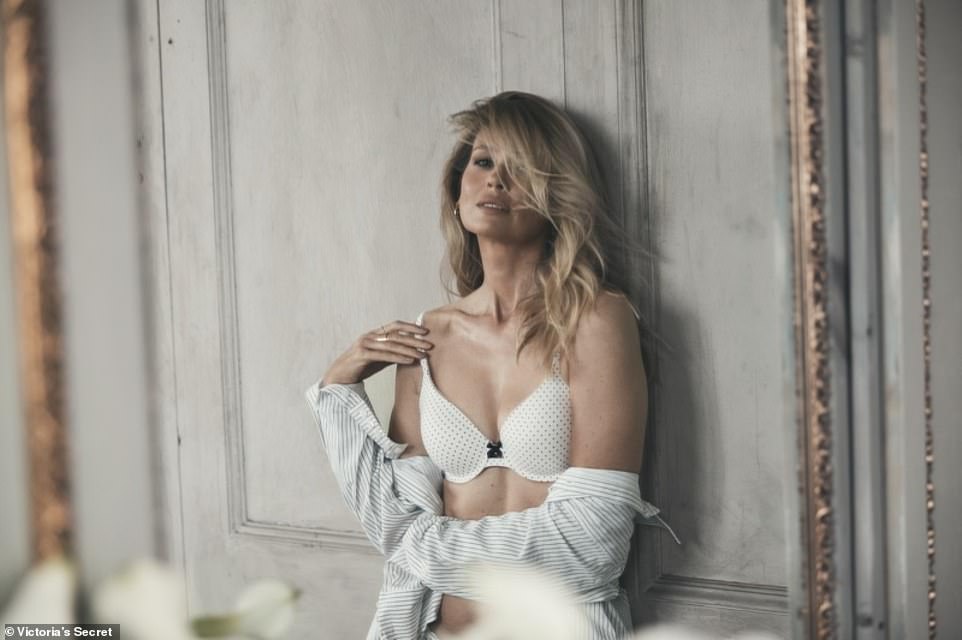 Getting more diverse: Here is a closer look at one of their veteran models in white

The company was founded in 1977 by US businessman Roy Raymond, who set up a small chain of boudoir lingerie shops when he could find no man-friendly women’s stores. In 1982 he sold the company to clothing magnate Les Wexner for $1million – a fraction of its current value. Raymond later committed suicide by jumping off the Golden Gate Bridge in San Francisco.

He chose the name Victoria after Queen Victoria, thinking it sounded refined, and added Secret to refer to what was hidden under the clothes. 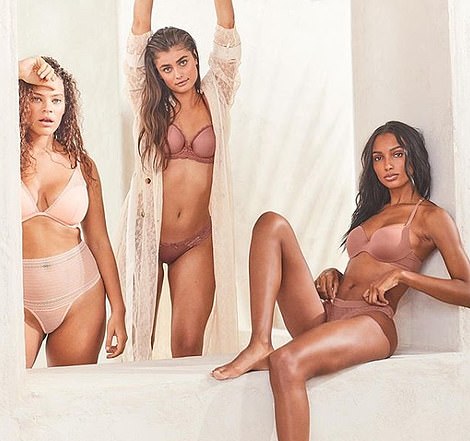 A new ad for VS: They still have thin ladies in their ads, but there is some diversity added

Marvelling at one store which looked like a Victorian ‘brothel…with red velvet sofas’ Wexner turned the company into one of the world’s leading lingerie brands.

Hundreds of stores opened coast to coast and 25million brochures were delivered, but it was the glitzy launch of Victoria’s Secret’s first blatantly sexy catwalk show at the Plaza Hotel, New York in 1995 which made the difference.

Broadcast on network TV to 185 countries, millions tuned in to see supermodels Naomi Campbell, Helena Christensen, Tyra Banks and Karen Mulder – among others – stripped back to the barest of essentials.

Glossy, extravagant, seductive, ultra-feminine and sophisticated, it all seemed a very glamorous world away from the risque, cheap nylon, crotch-less offerings sold in sex shops.

Victoria’s Secret gave its flimsy black satin G-strings names like ‘second skin’ and high price tags which never quite justified the tiny amount of material that went into making them.

Razek insisted the Angels were more like ‘athletes’ or ‘Olympians’ to whom other strong, aspirational women could relate. Ninety-eight per cent of its customer base were women, he said.

How hollow those words sound now from a company struggling to adapt to a changing world and facing allegations that two of its most senior executives presided over a culture of misogyny, bullying and harassment. 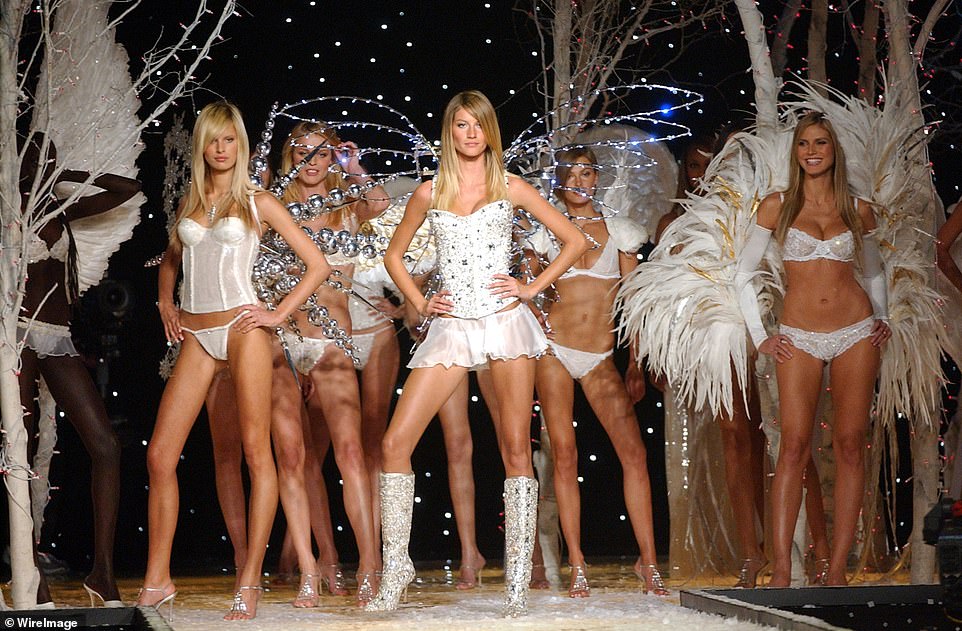 But back then, not only did the brand attract established models, it created stars out of unknowns.

In 1999 supermodel Heidi Klum made headlines by wearing Victoria’s Secret’s ‘Millennium Bra’ on the catwalk in New York. Worth $10million, it was dubbed ‘the world’s most expensive bikini’, featuring 3,024 stones, including 1,988 sapphires and a five-carat diamond.

Since then the ‘fantasy’ bra has been the highlight of the Victoria’s Secret annual extravaganza, and competition is fierce from aspiring models to follow in the footsteps of top Angels Gisele Bundchen, Miranda Kerr and Alessandra Ambrosio.

Official brand ambassadors could earn £4million a year. For that though, they had to be at least 5ft 9in, stunningly beautiful and maintain the required 34-24-34 physique. One Angel, who’d recently given birth, described as ‘torture’ the liquid diet and exercise regime she endured to get into shape. 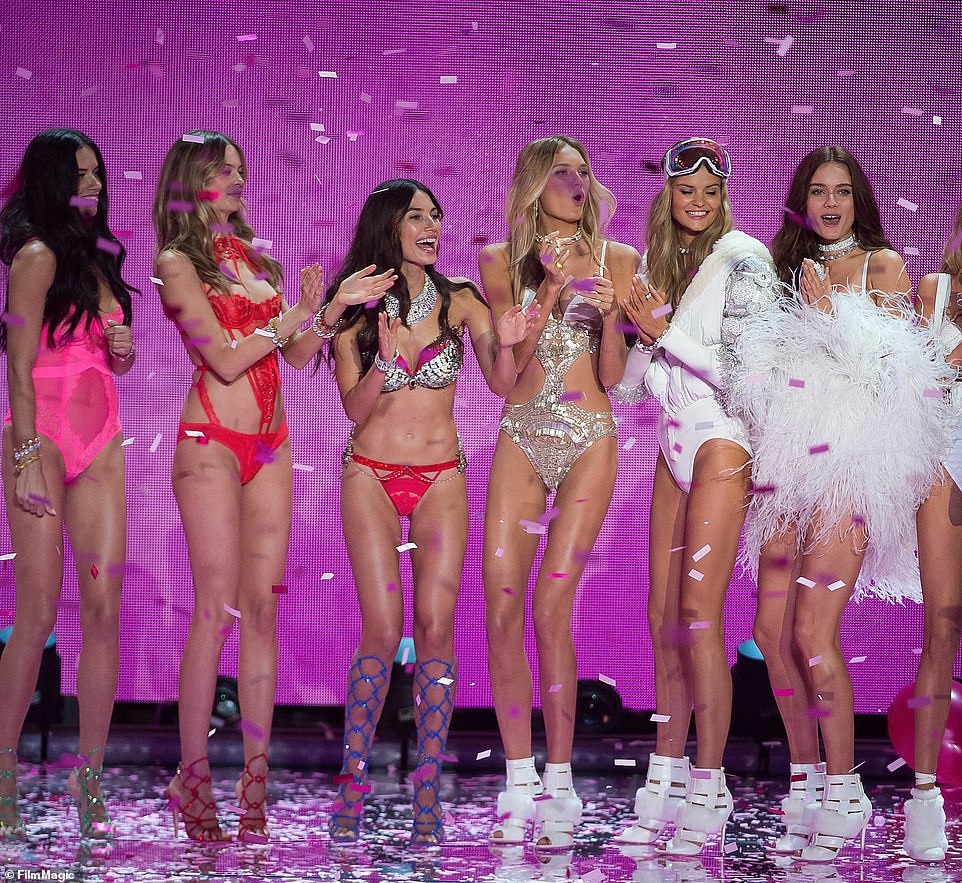