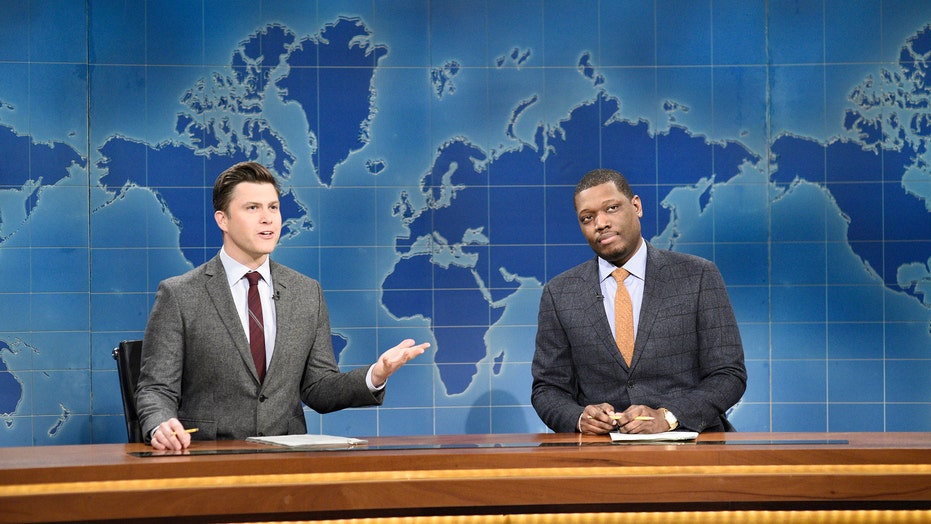 Hosts Colin Jost and Michael Che returned to the “Weekend Update” desk for the first time since the pandemic shut down production on the long-running NBC sketch show. They immediately jumped on the opportunity to mock the president for contracting the potentially deadly virus after downplaying the severity of the pandemic for months.

The hosts pulled no punches in their rebuke, mocking Trump just hours after it was announced that he was taken to Walter Reed Medical Center for treatment.

“Say what you will about 2020, but it’s got moves,” Jost began the segment. “This news was a lot for us to process a day before we came back on the air after four months off — and it all happened so fast. I woke up yesterday and heard the president had mild symptoms and then, four hours later, he was getting medevaced to a hospital in what looked like the last chopper out of Vietnam." 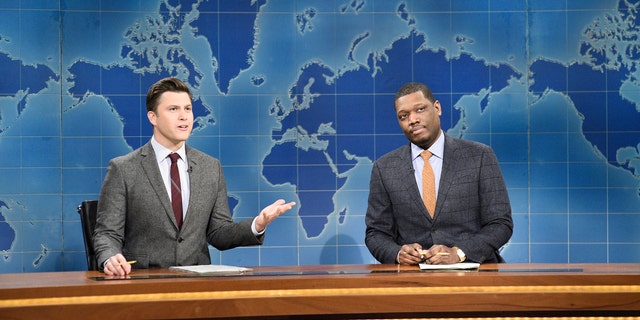 ‘Saturday Night Live’ hosts Colin Jost and Michael Che returned for the Season 46 premiere on the ‘Weekend Update’ desk.
(Will Heath/NBC via AP)

He added: “I’ve got to say, it’s a bad sign for America that when Trump said he tested positive for a virus, 60% of people were like ‘prove it.’”

He joked that it’s been “weird” to see how many of Trump’s opponents and critics have publicly wished him well since announcing in a tweet late Thursday night that he and first lady Melania Trump had contracted COVID-19.

“I think a lot of them are just guilty that their first wish came true,” he joked.

Che took the reins from there, unequivocally saying that he finds the president’s illness “funny.”

“Alright look this is weird because a lot of people on both sides are saying there's nothing funny about Trump being hospitalized with coronavirus even though he mocked the safety precautions for the coronavirus and those people are obviously wrong,” he joked. “There’s a lot funny about this. Maybe not from a moral standpoint, but mathematically, if you were constructing the joke, this is all the ingredients you need. The problem is, it’s almost too funny. It’s so on-the-nose. It’d be like if I was making fun of people wearing belts and then my pants just immediately fell down.”

He also mocked the president for holding rallies amid the pandemic, noting it was an example of him further flaunting coronavirus precautions.

“By the way, is anyone surprised by this?” Che asked. “I honestly thought Trump was trying to get coronavirus. I thought it was like ‘Groundhog Day’ when Bill Murray knew he couldn’t die and he was just trying anything. So, all those maskless rallies Trump was having, that was him being safe? Look, I don’t want the president to die, obviously. Actually, I wish him a very lengthy recovery.”

Jost closed out the segment by implying that Trump would not be as graceful as his presidential opponent, Joe Biden, if the situation were reversed.

“I will say that despite everything President Trump seems to be in good spirits. He tweeted a message that ended with love and three exclamations points. So, it sounds like they’re cutting his hydroxychloroquine with a little bit of molly,” Jost said. “And then, this was good, just hours ago, Trump released a video from the hospital saying he was in better health, which is great news but I will point out that if the situation were reversed and it was Biden who got sick, Trump would 100% be at a maskless rally tonight getting huge laughs doing an impression of Biden on a ventilator. Just saying.”

The “Weekend Update” segment wasn’t the only part of the Season 46 premiere that took direct jabs at the news that Trump has been diagnosed with the coronavirus. Host Chris Rock made light of the situation in his opening monologue.

“Before we even get started, let’s say the elephant in the room. President Trump’s in the hospital from COVID and I just want to say my heart goes out to COVID," Rock said to a huge laugh.

Prior to that, Alec Baldwin and Jim Carrey joined the show as Donald Trump and Joe Biden respectively for a parody of Tuesday’s presidential debate. Both actors made light jabs about Trump’s real-life COVID-19 comments coming back to haunt him later in the week, knowing that the debate took place just two days before Trump made his diagnosis public.