What Happened With Blake & Kristina Before ‘Bachelor In Paradise’? It’s Not Pretty

Whenever a Bachelor in Paradise veteran stops by the beach for another round of matchmaking, they usually have a pretty firm goal in mind. Chances are, someone slighted them on their last visit to Paradise or even out in the real world, so this returning contestant typically wants some vengeance. Such was the case with Kristina Schulman when she popped up in Paradise again to teach Blake Horstmann a lesson. What happened between Blake and Kristina before Bachelor in Paradise? Fans don’t have the exact details, but their past has led to quite an awkward Paradise situation.

Although he was the franchise’s golden boy when Bachelorette Becca Kufrin rejected him on her 2018 finale, Blake made his Paradise debut on Aug. 5’s Season 6 premiere with a less than stellar start. Once at the beach, he gravitated toward Hannah Godwin, who made it clear in press interviews before the show that she was interested in Blake. At first, the pair’s feelings seemed mutual, but when Blake scored the first date card, he asked out Tayshia Adams, who he met once at a music festival before filming.

Caelynn Miller-Keyes then spilled that she had hooked up with Blake before the show only to find him messaging Hannah G. the next morning. Blake reportedly told her that he had slept with Kristina the night before their time together. Although Caelynn admitted she and Blake were previously on the verge of dating, he apparently begged her to keep their old relationship a secret. This understandably sent Caelynn to Paradise feeling wary of sharing the truth about Blake.

While Caelynn has yet to confront Blake, Kristina arrived at the beach on Day 2 to invite him on a date and set him straight about his time with Caelynn overlapping with theirs. "I honestly thought that he would have a little more respect for me,” she said. “So today, I’m going to make Blake my b*tch." 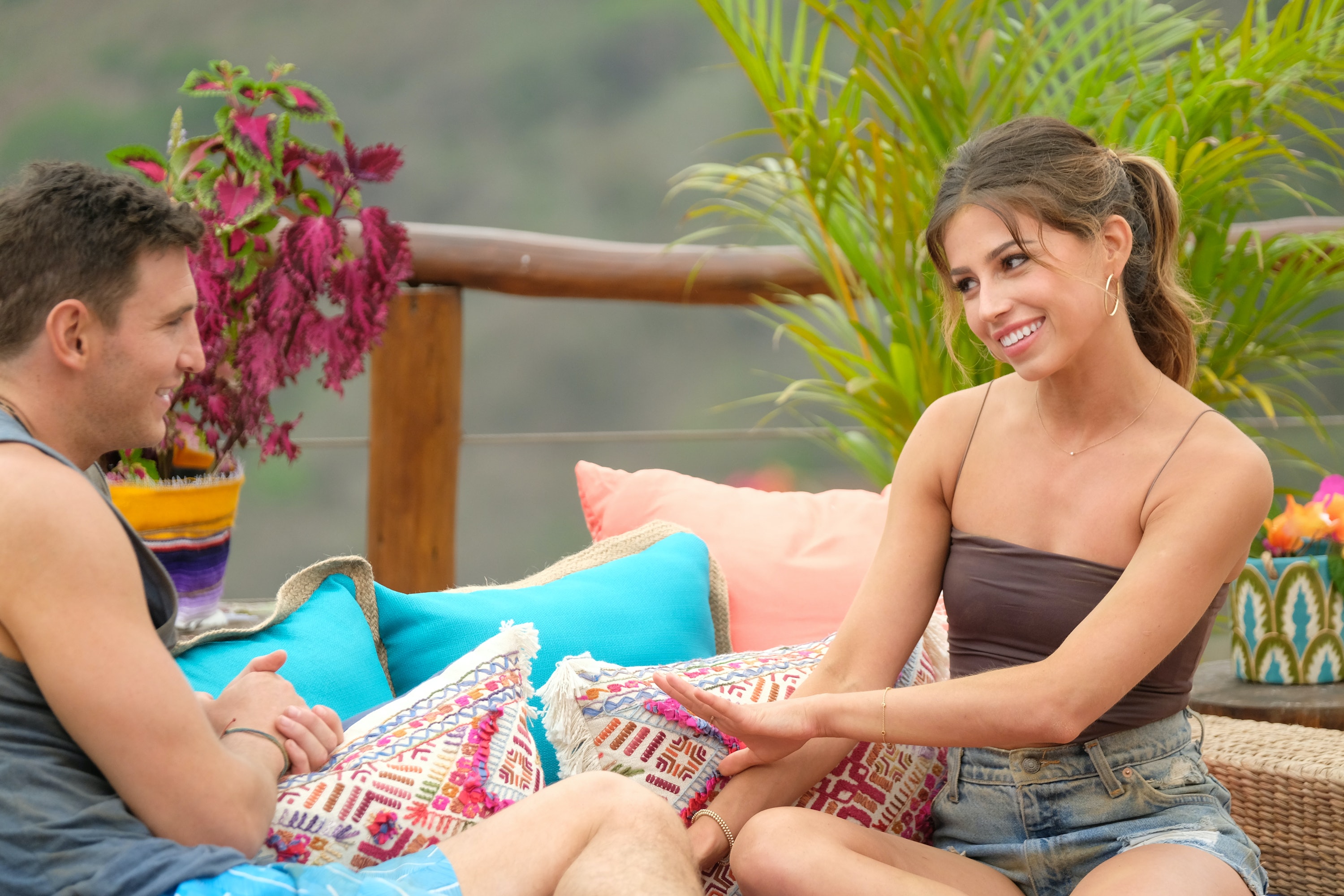 The episode ended before the two went on their date, but fans who closely follow Bachelor news will remember that Blake and Kristina have a history that goes back further than his ties with Colton Underwood’s Bachelor contestants. While Blake tried to play off their connection as a friendship that entailed "hanging out" for about six months, Bachelor Nation once thought otherwise.

In September 2018, he and Kristina, a contestant from Nick Viall’s Bachelor season, were spotted together at a baseball game in Blake’s hometown of Denver, Colorado. The sighting sparked rumors that they had a secret relationship, and the fact that eagle-eyed fans later dug up proof of them together at dinner and a brewery certainly didn’t discredit these theories. In an October interview with Extra, Blake then named Kristina as his Bachelor Nation crush, while Kristina acknowledged on Instagram that she received plenty of questions about her relationship with Blake.

However, in late October, Blake denied that they were dating. On the Almost Famous podcast, he told hosts Ben Higgins and Ashley Iaconetti, "I can confirm I am single right now … [Kristina’s] amazing, she’s great, and you know, we get along really well. But right now, you know, we are hanging out, but it’s nothing serious right now."

So, what happened between then and Paradise? The details are still a little murky for viewers, but after getting caught in a messy love triangle with Dean Unglert and Danielle Lombard on Season 4 of Paradise, Kristina is definitely determined to emerge the victor this time around. Here’s hoping she spills all the tea when her date with Blake airs. Season 6 of Bachelor in Paradise continues at 8 p.m. ET on Tuesday, Aug. 6, on ABC.