What The Queen Wants Prince Andrew To Do With His Future

But if for some reason you missed it, here’s the scandal in a nutshell: Giuffre alleges that, at the age of 17, she was forced by Epstein to have sex with Prince Andrew three times. It should be noted, however, that the royal vehemently denies those claims, though he has yet to go on the record to dispute those allegations, per Daily Mail. His seeming lack of cooperation in the case has been a serious point of contention with both investigators and prosecutors.

Nevertheless, it appears Queen Elizabeth is demonstrating her staunch support of Prince Andrew by way of securing a future for him. Keep reading after the jump to learn the controversial plans she has for her son.

Prince Andrew will retain many of his honorary titles 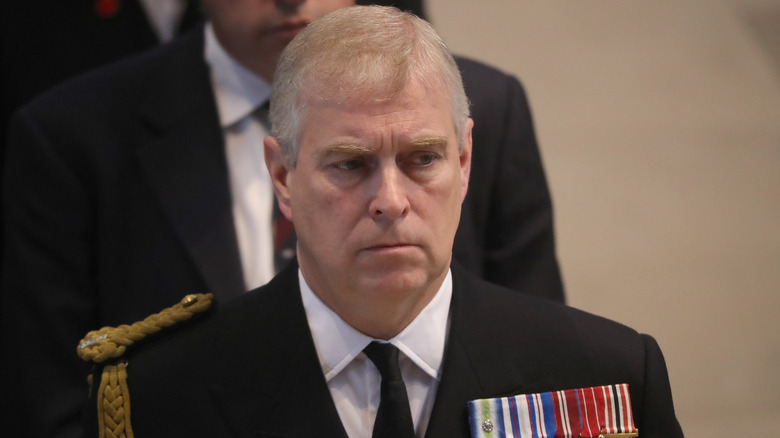 As reported by Daily Mail, Queen Elizabeth has declared that Prince Andrew will retain his honorary title as Colonel of Grenadier Guards, despite a little caveat that he most likely won’t actually be able to fulfill any of his public duties as a result of the sexual assault allegations — a move that has left many scratching their heads, including various military chiefs.

The queen’s decision has been described as both “unsatisfactory” and “very difficult.” “The Queen has let it be known to the regiment that she wants the Duke of York to remain as colonel and the feeling is that nobody wants to do anything that could cause upset to the colonel-in-chief,” a senior military source told The Sunday Times. “How can you have a colonel who can’t perform the role? … You can’t have a colonel who can’t do public duties,” they continued.

In addition to his title as Colonel of Grenadier Guards, it’s reported that Prince Andrew has also retained the honorary titles of “colonel of the Royal Highland Fusiliers, colonel-in-chief of the Yorkshire Regiment, commodore-in-chief of the Fleet Air Arm and honorary air commodore in the RAF.”

If you or anyone you know has been a victim of sexual assault, help is available. Visit the Rape, Abuse & Incest National Network website or contact RAINN’s National Helpline at 1-800-656-HOPE (4673).