Zoe Kravitz and Channing Tatum are the picture of domestic bliss

Domestic bliss! Channing Tatum and Zoe Kravitz stock up on toilet tissue, an oven pan, and other household items in New York amid hot new romance

They sent the world into overdrive last week when their surprise public display of affection immediately prompted romance rumors.

Yet it appears Zoe Kravitz and Channing Tatum may have already settled into a state of domestic bliss, as they were pictured out shopping for household items together on Tuesday.

The rumored new couple were seen on a grocery run in upstate New York – the third time they’ve been snapped together in just a week – picking up what appeared to be toilet tissue and an oven pan.

Zoe, 32, who this week finalized her divorce from ex-husband Karl Glusman, clutched two bouquets of flowers as she walked alongside Channing, 41, while he pushed their cart. 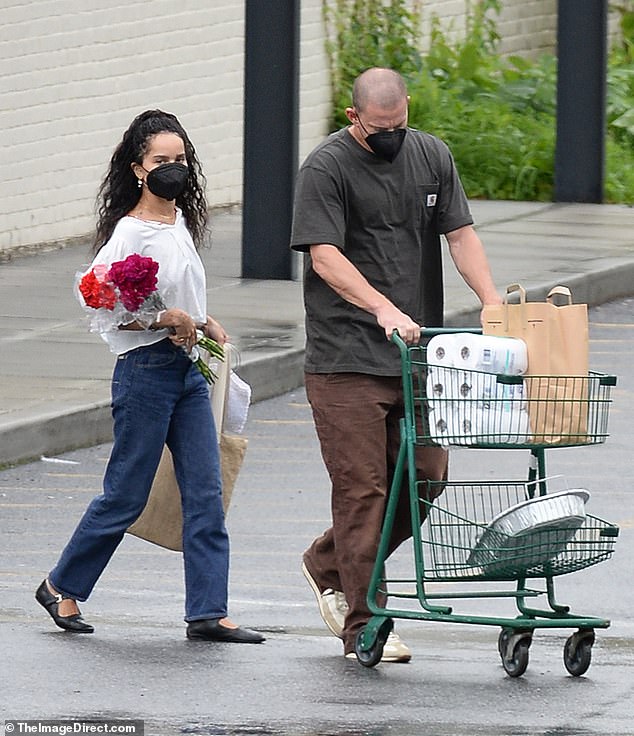 Domestic bliss! Zoe Kravitz and Channing Tatum shop for household items together – including toilet roll and an oven pan – while in upstate New York amid their rumored romance

As the pair were seen making their way through a rainy car lot, they loaded up their shopping into an SUV as they headed off together.

The trip came just a day after Zoe and ex Karl’s divorce was filed with a New York court. 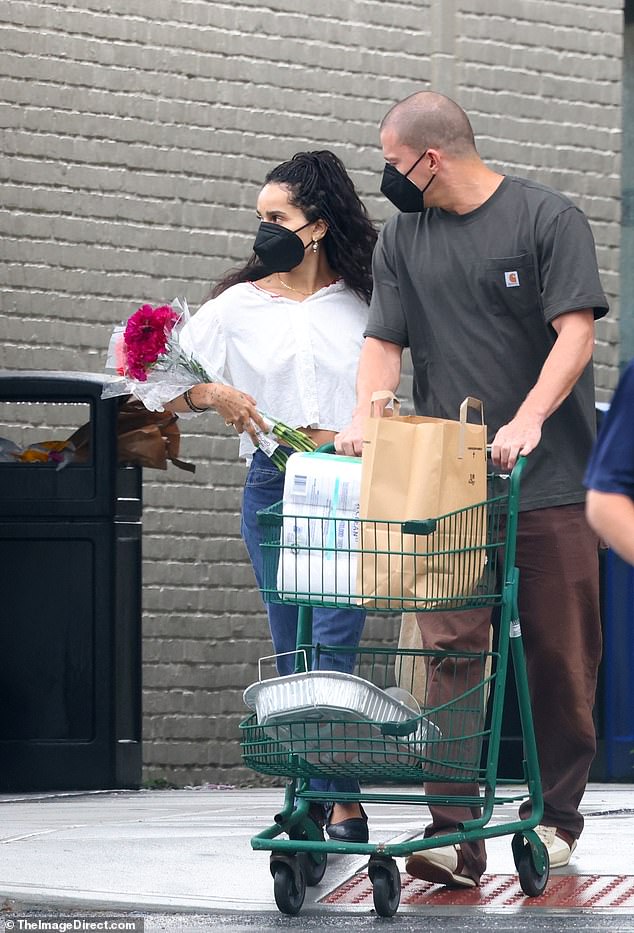 Cute: Zoe, 32, who this week finalized her divorce from ex-husband Karl Glusman, clutched two bouquets of flowers as she walked alongside Channing, 41, as he pushed their cart 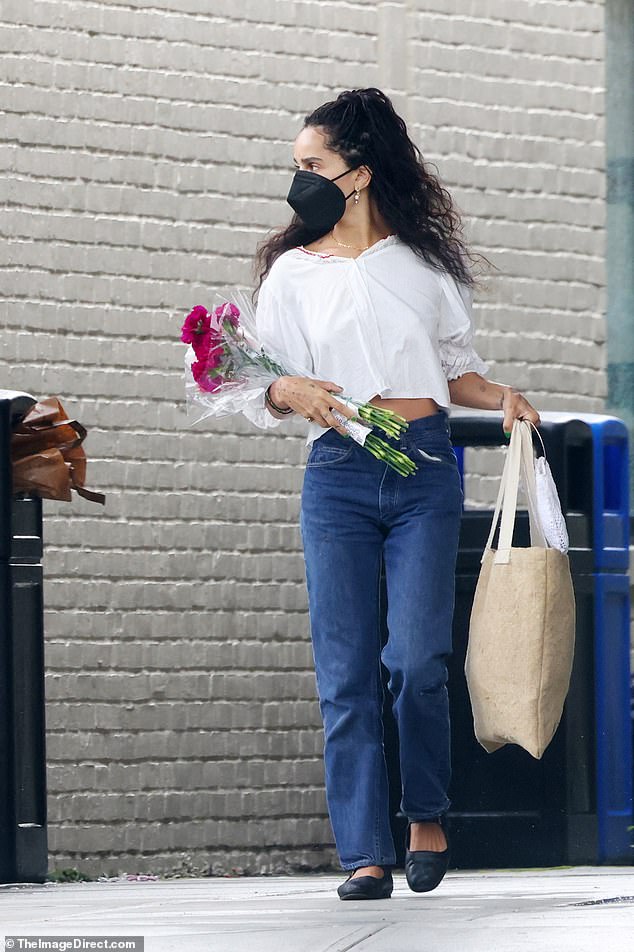 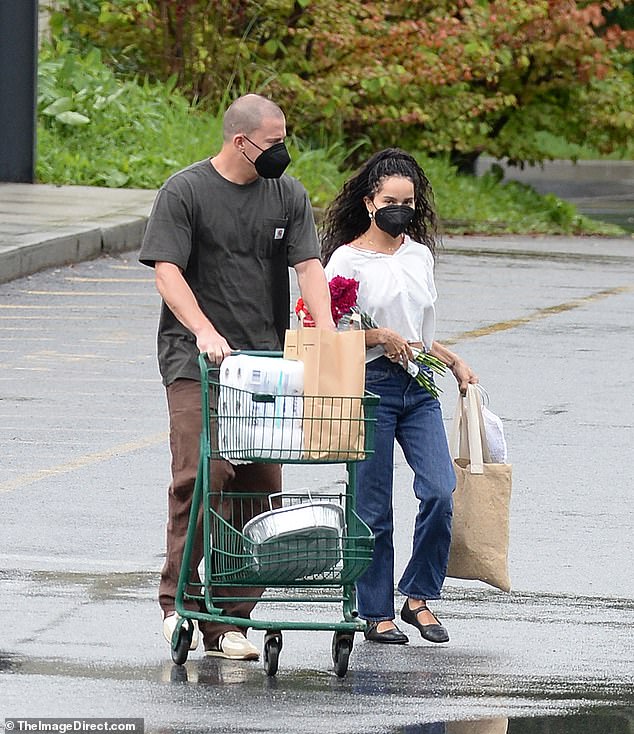 Ready for home: The pair appeared to be ready to cook up a storm as they took home an oven pan

They were wed at the Paris home of her father Lenny Kravitz in June 2019.

In attendance at the ceremony were her Big Little Lies co-stars Reese Witherspoon and Nicole Kidman, as well as other celebrities.

Meanwhile, Zoe and Magic Mike star Channing sent the world into overdrive last week when they were pictured out together packing on the PDA. 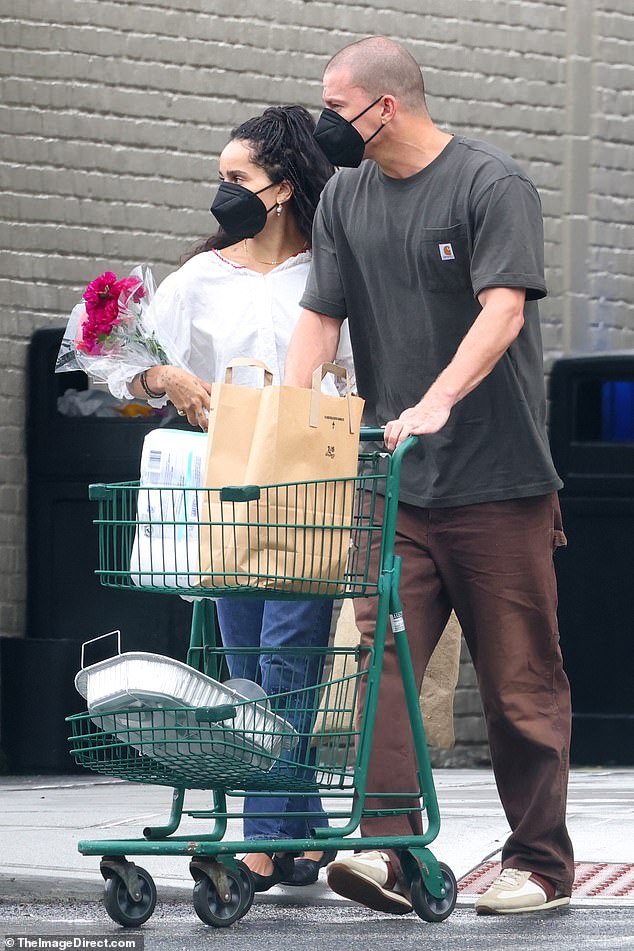 Just a weekly shop: The duo already appear to be very comfortable around one another 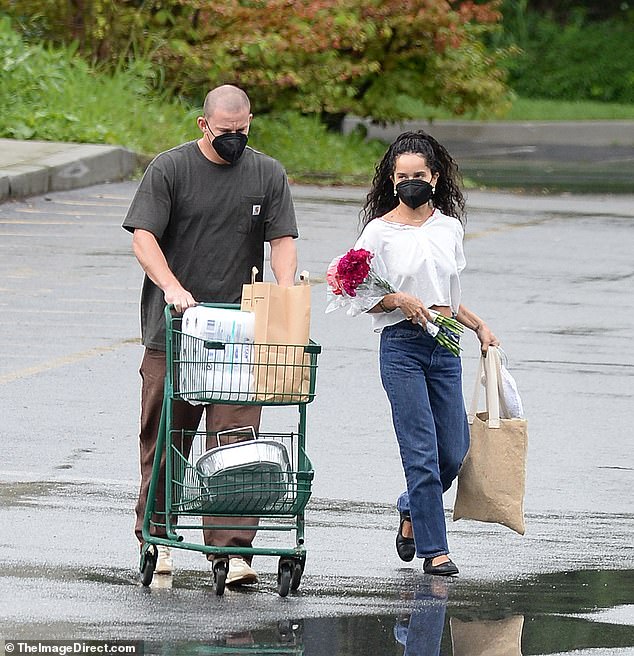 Fevered: Zoe and Magic Mike star Channing sent the world into overdrive last week when they were pictured out together packing on the PDA 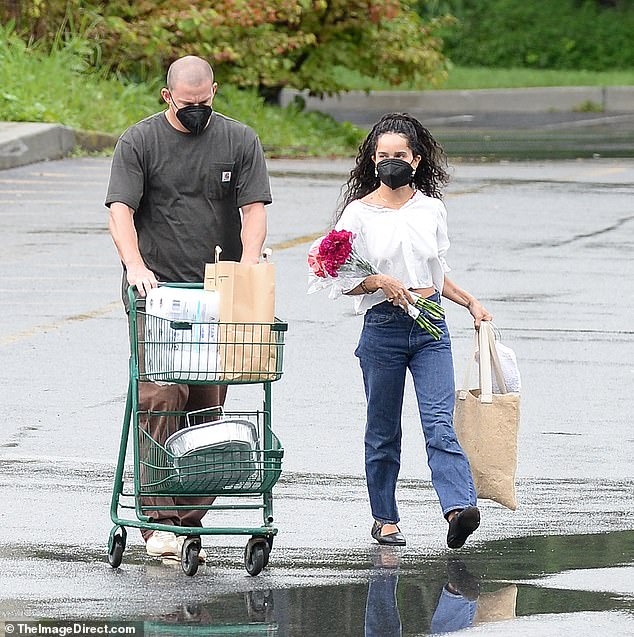 In sync: Zoe and Channing looked to be heading home together with their grocery shopping after loading up their car 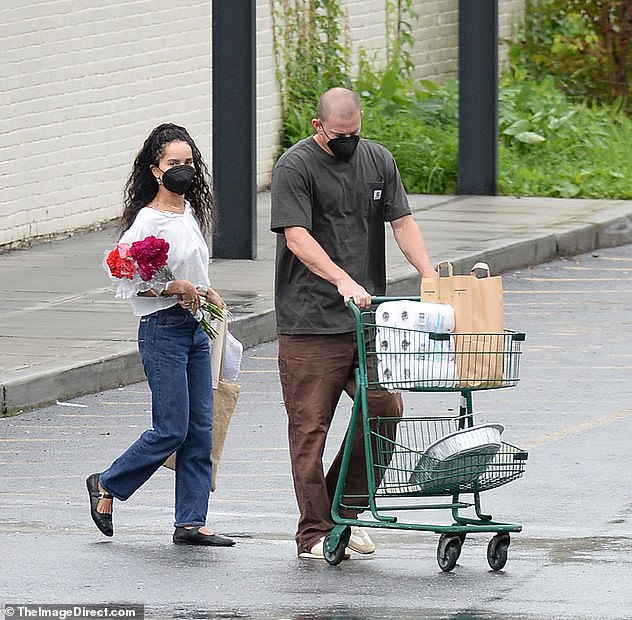 Big shop: The rumored lovers have been sending tongues wagging ever since they were first spotted together last week packing on the PDA

Channing split with singer Jessie J in October of last year after being on and off for almost three years.

The 21 Jump Street actor was wed to his Step Up co-star Jenna Dewan for 10 years; together they co-parent daughter, Everly, aged eight.

The two have been linked for a while. 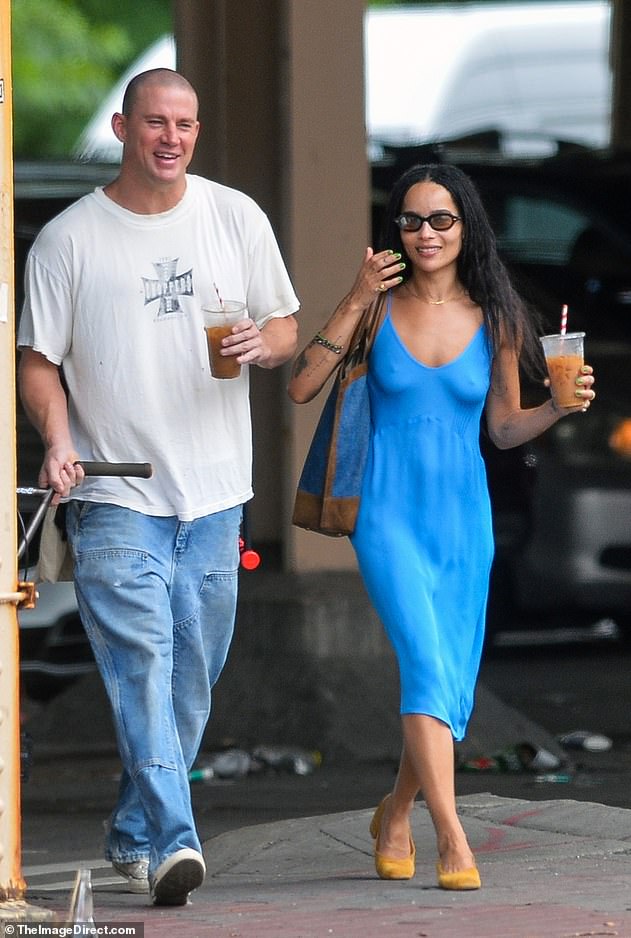 What’s going on here? Zoe and Magic Mike star Channing, 41, sent the world into overdrive last week when they pictured out together packing on the PDA (Pictured just las week)

His exes: The 21 Jump Street actor was wed to his Step Up co-star Dewan (left) for 10 years; together they co-parent daughter, Everly, aged eight. Channing split with singer Jessie J (right) in October of last year after being on and off for many years 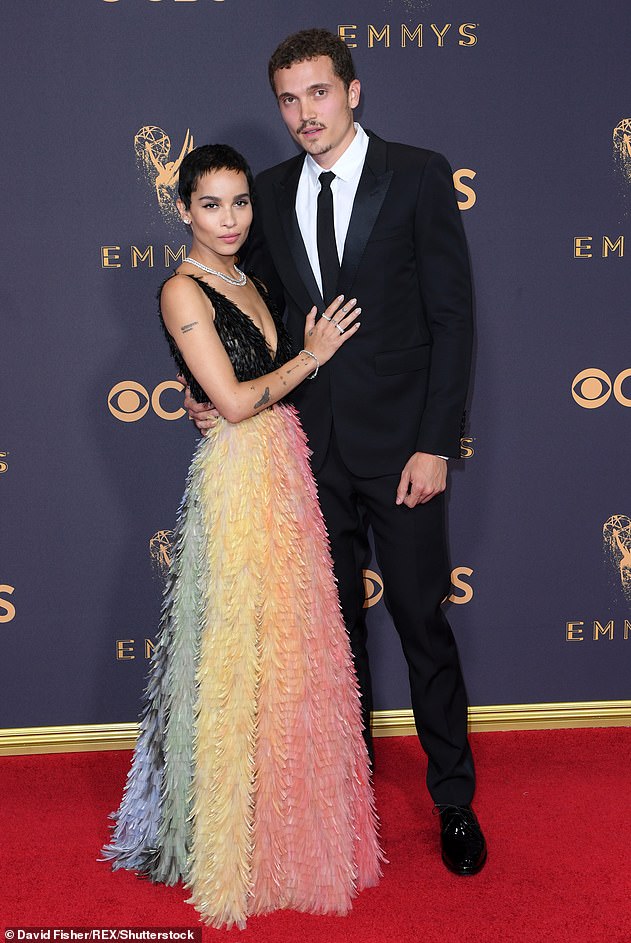 Making way for someone new? Zoe finalized divorce from ex-husband Karl Glusman this week… amid rumored new romance with Channing (Pictured in 2017)

In January there were claims that the two were dating. The rumors appeared to stem from a tweet issued by one verified Twitter user who wrote: ‘zoe kravitz and channing tatum …… is that what i’m hearing ……’

But People Magazine claimed that they were not, noting that they had been just friends for a long time.

Then in April eyebrows were raised when Zoe wrote Channing a birthday message on Instagram.

While the pair have been inseparable in recent weeks as their relationship heats up, he is also keeping up with her on social media.

Overall, Channing follows 1780 accounts in total on his Instagram.

Fan account @ZoeJKravitzSource noticed that the star was following them on Wednesday, posting a screenshot of their new mutual with a slate of crying emojis.

He also follows @zkluv, @zoekravitzinc and @kravitzupdate which share fan art, paparazzi pictures and social pictures of the star. 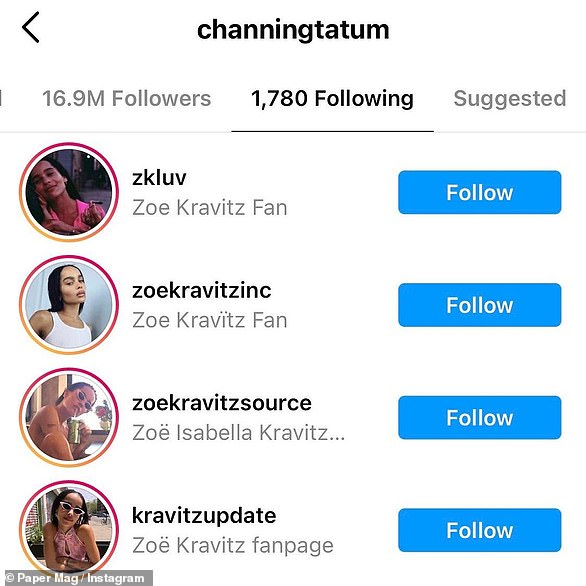 Keeping up with Zoe: The smitten actor proudly follows fan pages dedicated to his new love