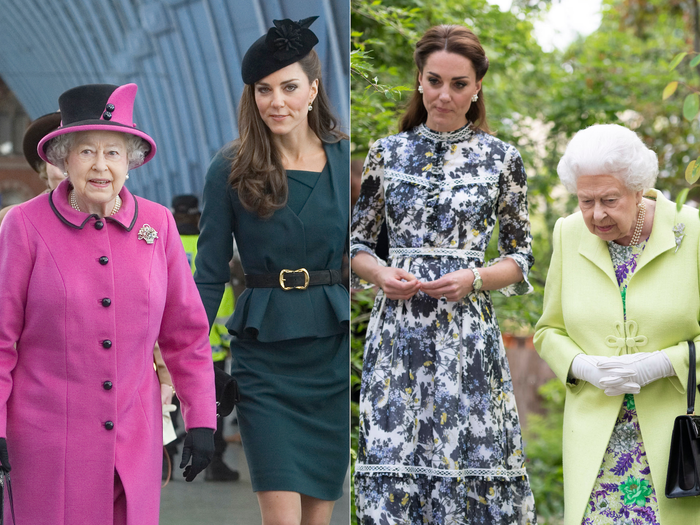 Over the years, Kate Middleton has made headlines for wearing one showstopping look after another, but what some might not have noticed is how similar the Duchess of Cambridge's wardrobe is to that of Queen Elizabeth II.

Elizabeth Holmes, the author of "HRH: So Many Thoughts on Royal Style," told Insider she thinks Middleton has followed in the Queen's footsteps, while Meghan Markle has often looked to the late Princess Diana for fashion inspiration.

"I think they understand the power of clothes, the role it has in their public duties, and have remained consistent with their style," she said of the Queen and Middleton. "There's a calming sense in that consistency because you know what to expect from them. It feels as though Kate has studied the Queen's wardrobe and what she does with those brightly colored coats and hats. I think that Kate is embracing the attention around her fashion."

Holmes added that the Queen's candy-colored looks will always be a part of her legacy, while Middleton has grown much bolder in her fashion choices both as a way to honor Her Majesty and prepare herself for the day she becomes Queen consort.

Keep scrolling for a look at 15 times Kate Middleton appeared to channel the Queen with her outfits.

Kate Middleton and the Queen often wear colorful outfits. In 2012, the two royals coordinated in blue. 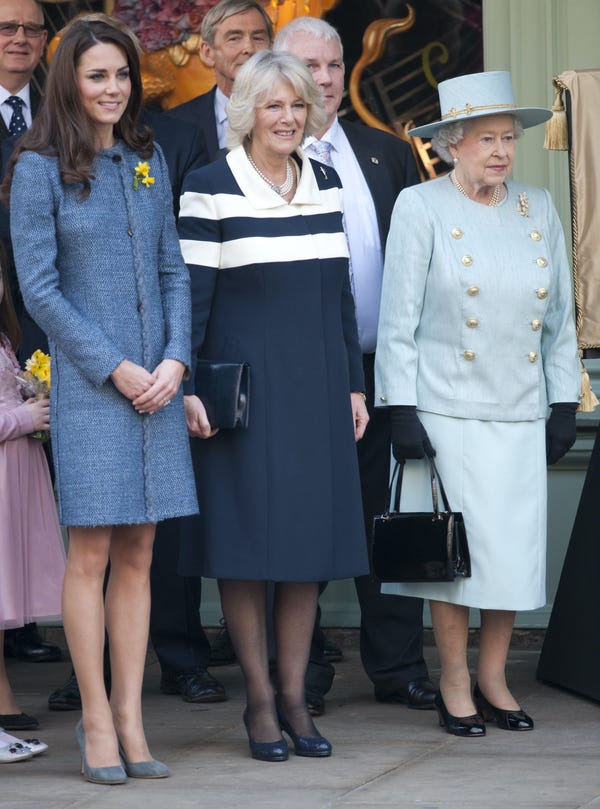 For an appearance with the Queen and Camilla, Duchess of Cornwall, Middleton wore a blue coat by M Missoni. The Queen, on the other hand, wore a sky-blue look with a matching hat.

Both Middleton and the Queen wore daffodils, which are a symbol of the royal family's Welsh heritage.

Middleton and the Queen know the power of good accessories. They both wore hats and pantyhose for an appearance in Leicester in 2012. 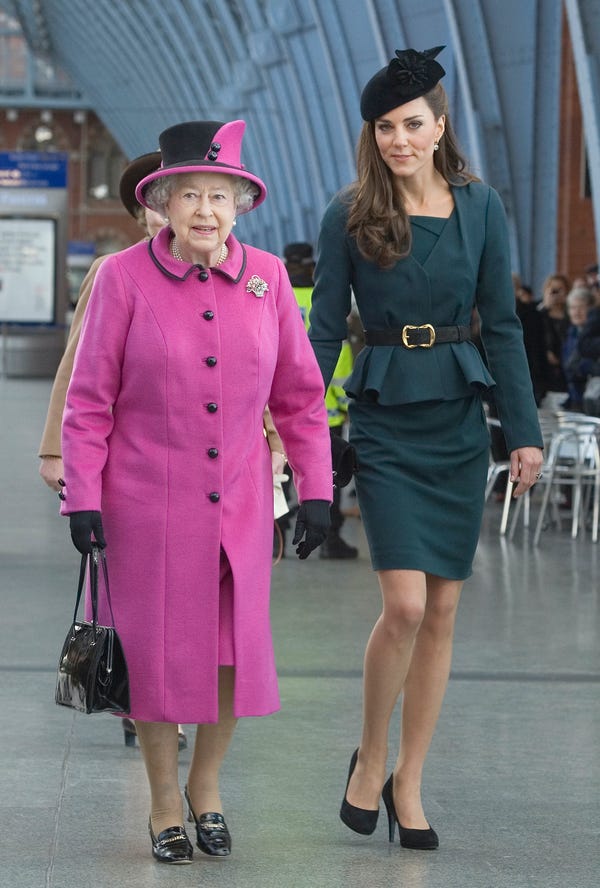 According to "HRH" author Elizabeth Holmes, the Duchess of Cambridge tends to wear both accessories as a sign of respect when she has an appearance with the Queen.

"There isn't a written rule, but I think it's out of respect for the Queen, how she dresses, and the tone that she sets," Holmes said, adding that Middleton will even wear the occasional hairnet for this reason.

The Queen and Kate Middleton both tend to gravitate toward garments with delicate details. In 2012, they both wore patterned outfits for an appearance on the balcony at Buckingham Palace. 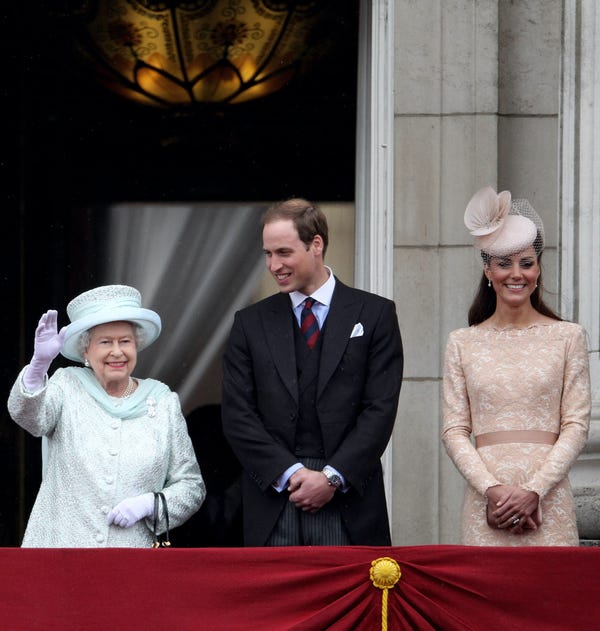 For a Diamond Jubilee Thanksgiving service at St. Paul's Cathedral in 2012, the Queen wore a bespoke Angela Kelly outfit in mint green that was designed with embroidered flowers. She also wore a chiffon scarf and a matching hat.

Middleton also chose an outfit with a delicate pattern for the royal engagement. She appeared on the balcony at Buckingham Palace in a lace dress from Alexander McQueen with a hat from Jane Taylor Millinery.

Middleton and the Queen matched again in similar shades of blue during a royal visit to Nottingham in 2012. 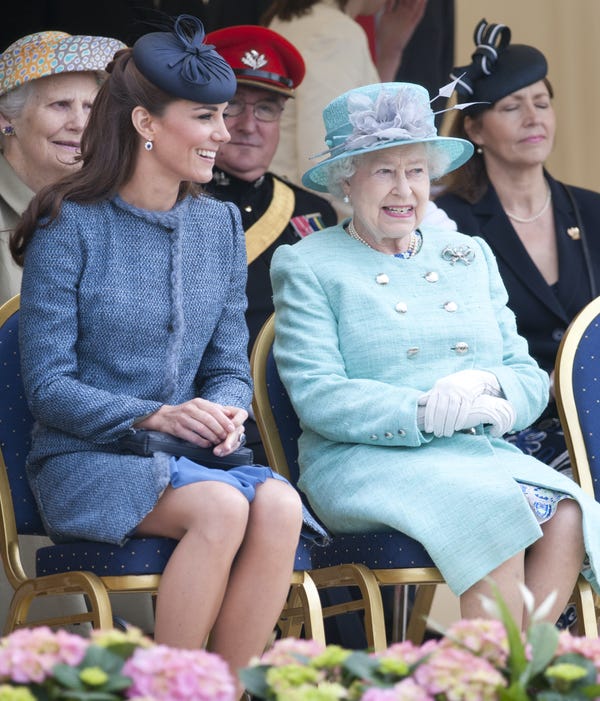 Middleton repeated the same M Missoni tweed coat she wore a few months prior for this appearance with the Queen.

The duchess completed her look with a fascinator, while Queen Elizabeth wore a Stewart Parvin coat and shift dress with a Rachel Trevor-Morgan hat.

Both royals opted for wearing bold colors to the Dramatic Arts Reception at Buckingham Palace in 2014. 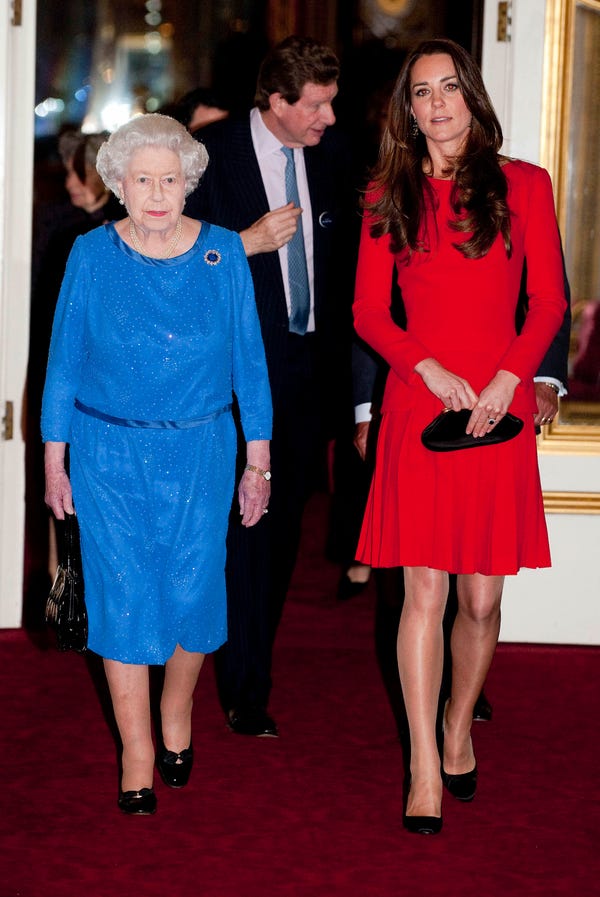 For the reception, the Queen wore a sparkly blue dress with her classic Launer handbag.

Middleton also embraced a bold look by recycling a bright-red Alexander McQueen dress. She completed the look with an Anya Hindmarch clutch and black Prada pumps.

At the Trooping the Colour ceremony in 2017, Middleton and the Queen showed they're not afraid to stand out by wearing bright outfits. 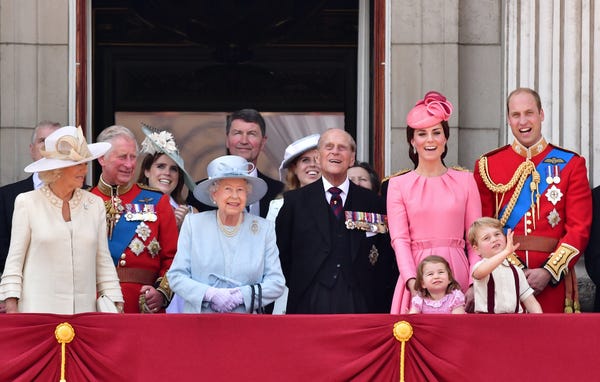 The duchess and the Queen coordinated again in similar shades of blue at the 2018 Trooping the Colour ceremony. 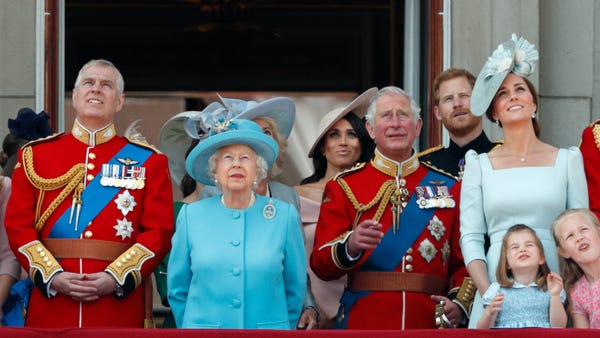 Queen Elizabeth opted for a blue coat and dress from Stewart Parvin, while Middleton wore an Alexander McQueen dress. 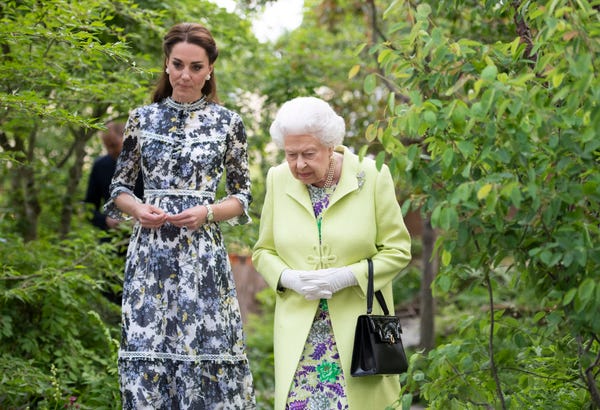 The Queen stood out by pairing her flower dress with a neon-green coat, while Middleton wore a high-neck Erdem dress in a similar print.

Middleton coordinated with the Queen in a powder-blue outfit for the Royal Ascot in 2019. 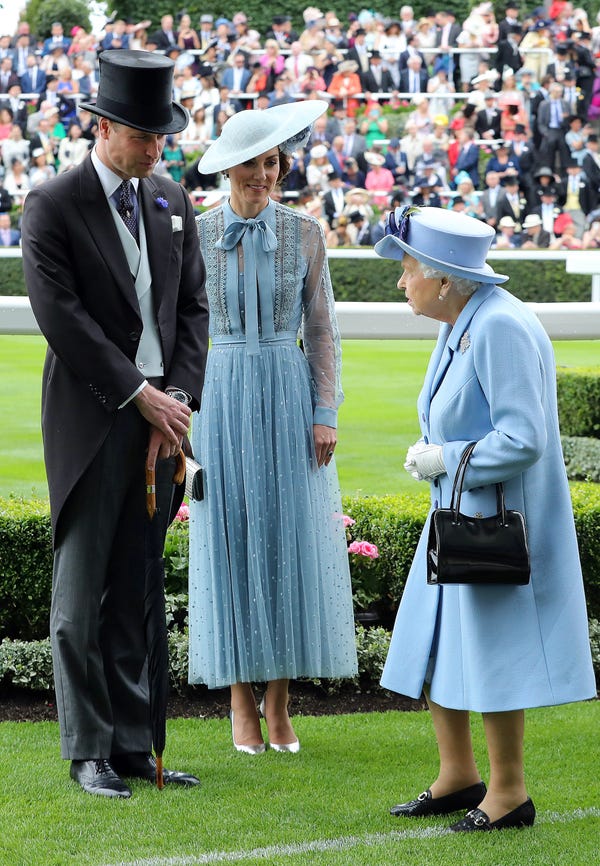 Middleton attended the Royal Ascot in a blue Elie Saab dress, which matched the Queen's blue coat and hat.

The Queen knows how to elevate an outfit by adding a hat. Middleton followed Her Majesty's lead by wearing a statement headpiece for Christmas 2019. 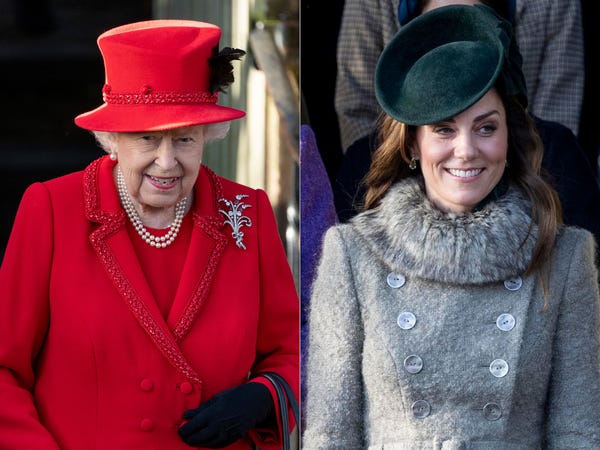 Queen Elizabeth is rarely seen without a hat, and Middleton's choice in headwear has evolved throughout her years as a royal.

To attend the Christmas Day Church service, Middleton followed Queen Elizabeth's lead by wearing a festive hat with an accent on the left side.

Queen Elizabeth is known for her bright coats, and it's a style Middleton has started to embrace more often. 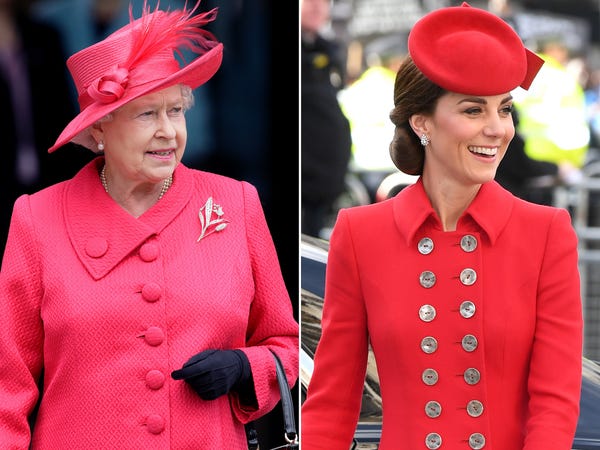 Just like the Queen, Middleton has shown that she's not afraid to stand out at royal engagements by wearing colorful coats. At the 2019 Commonwealth Day service, for example, the duchess wore a bright-red Catherine Walker coat.

The Queen's evening looks often consist of a simple yet elegant gown and showstopping jewelry. In 2019, Middleton channeled the same style in an Alexander McQueen gown. 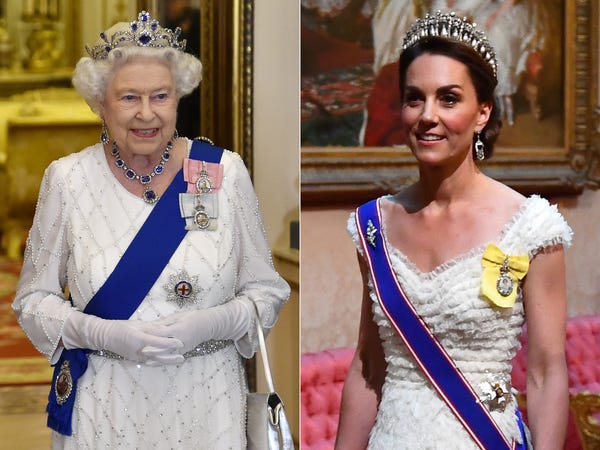 In 2015, Queen Elizabeth wore a white, beaded dress with the stunning Belgian Sapphire tiara, a necklace, and earrings.

In 2019, Middleton followed in her footsteps by making a statement at a State Banquet in a sleeveless white Alexander McQueen dress with her Cambridge Lover's Knot tiara, as well as the Queen Mother's sapphire and diamond earrings.

Middleton has followed the Queen's lead by finding her own signature style. Her Majesty is a big fan of skirt suits, while the duchess favors coatdresses. 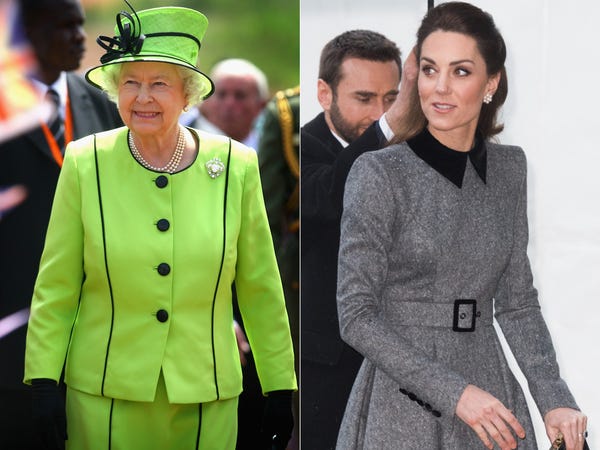 Overall, Queen Elizabeth and Middleton have remained consistent with their style, as Holmes told Insider.

For instance, the Queen has been wearing skirt suits since the 1990s, and Middleton started wearing her signature coatdresses when she became a member of the royal family.