SIX million households on Universal Credit will have benefits cut by £1,000 a year if Rishi Sunak goes forward with plans to axe a temporary coronavirus boost, warns a think tank.

The Chancellor increased benefits for vulnerable households by £20 a week, equal to £1,040 a year, to help them through the coronavirus pandemic. 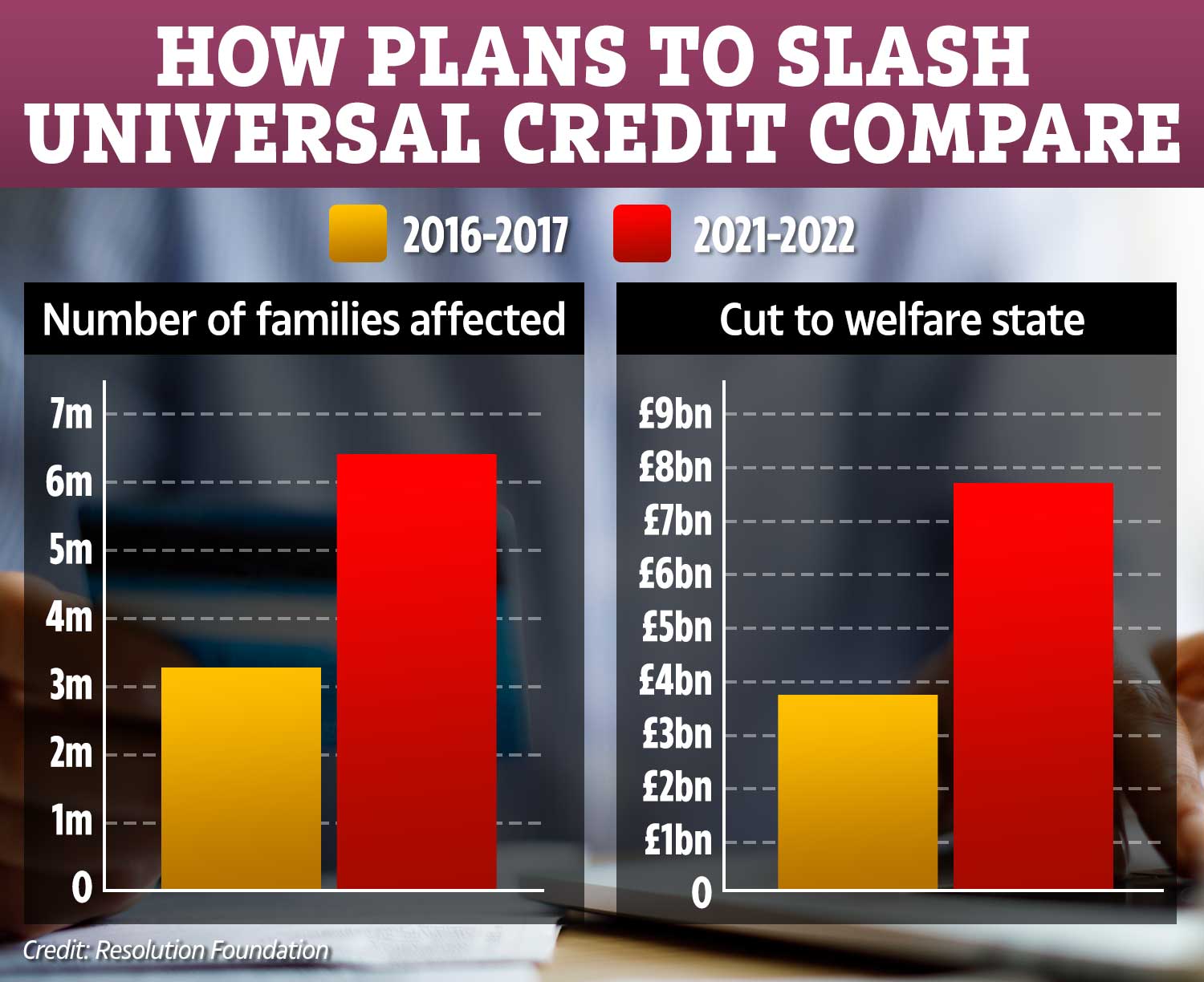 The measures are only supposed to last until April 2021 but the Resolution Foundation is urging the government to rethink the decision.

It comes days after more than 50 charities and groups wrote to Mr Sunak to make he temporary measures permanent or risk plunging hundreds of thousands into poverty.

The think tank said there were "striking similarities" between the plans to slash benefits proposed by the Mr Sunak and George Osborne five years ago when he was Chancellor.

Mr Osborne hoped to axe £3.4billion from the welfare budget in 2015 but made a u-turn after realising the move would affect 3.3million families.

What to do if you have problems claiming Universal Credit

IF you’re experiencing trouble applying for your Universal Credit, or the payments just don’t cover costs, here are your options:

The Resolution Foundation predicts that Mr Sunak will have to make the same u-turn as his plans to see £8billion wiped from the welfare state will affect twice as many people.

The "red wall" regions – the typically Labour stronghold constituencies in the north and Midlands which helped Boris Johnson secure election victory last year – and Wales will be worst hit by the cuts.

The Prime Minster has promised to invest billions of pounds on "levelling up" the UK and closing the economic gap between the north and south of the country.

But the benefit cuts would mean a third of working-age households in these areas will see their income drop compared to quarter in the south east of England, according to the report.

Mr Sunak's temporary coronavirus measures were based on expectations that the UK economy would make a v-shaped recovery.

Even though it is showing signs of improving, many fear that a second wave of Covid-19 infections and social distancing measures extended throughout winter will cause the economy to crash again.

Unemployment is expected to treble by the end of the year, with uncertainty on the jobs market believed to continue into 2021.

"It is clear that by April we will still be very much in the midst of this economic crisis," the report says.

By the time the system is fully rolled out in 2023, nearly 7million will be on it.

But there are big problems with the flagship system – it takes five weeks to get the first payment and it could leave some families worse off by thousands of pounds a year.

And while working families can claim back up to 85% of their childcare costs, they must find the money to pay for childcare upfront – we’ve heard of families waiting up to six months for the money.

Working parents across the country told us they’ve been unable to take on more hours – or have even turned down better paid jobs or more hours because of the amount they get their benefits cut.

It’s time to Make Universal Credit work. We want the government to:

Together, these changes will help Make Universal Credit Work.

"It is certain that unemployment will be high, and it is perfectly possible that it will still be rising.

"Why a government would cut unemployment benefits by over 20% (and by 25% for under 25s) at exactly that moment is hard to fathom."

Torsten Bell, chief executive of the Resolution Foundation, added: "But allowing the policy to expire next year would be a disaster not just for household incomes but for economic policy too as the Chancellor seeks to secure a recovery next year."

A spokesperson for the government said: "We’ve invested an extra £9bn in our welfare system to help those most in need through the pandemic, including by increasing Universal Credit and Working Tax Credit by up to £20 a week, as well as introducing income protection schemes, mortgage holidays and additional support for renters.

"The government will continue to do all it can to support the lowest paid families while focusing on helping people into work.

"This includes launching the Kickstart Scheme, a £2billion fund to create hundreds of thousands of new, fully subsidised jobs for young people."

Earlier this week, we reported how an algorithm used to automatically calculate Universal Credit payments is "flawed" pushing vulnerable households into hunger and debt, an international watchdog has warned.

The fault is estimated to affect 85,000 claimants who are sometimes paid twice in the same assessment period, for example, because payday would normally fall on a weekend or bank holiday.

In June, three judges ruled that the flaw was "irrational and unfair" after it pushed four single mums into poverty.

While the Department for Work and Pensions (DWP) accepts the ruling, it is still working on ways to fix the issue. London flat bought for £1,000 is now worth £3.7 MILLION
Celebrities Posts