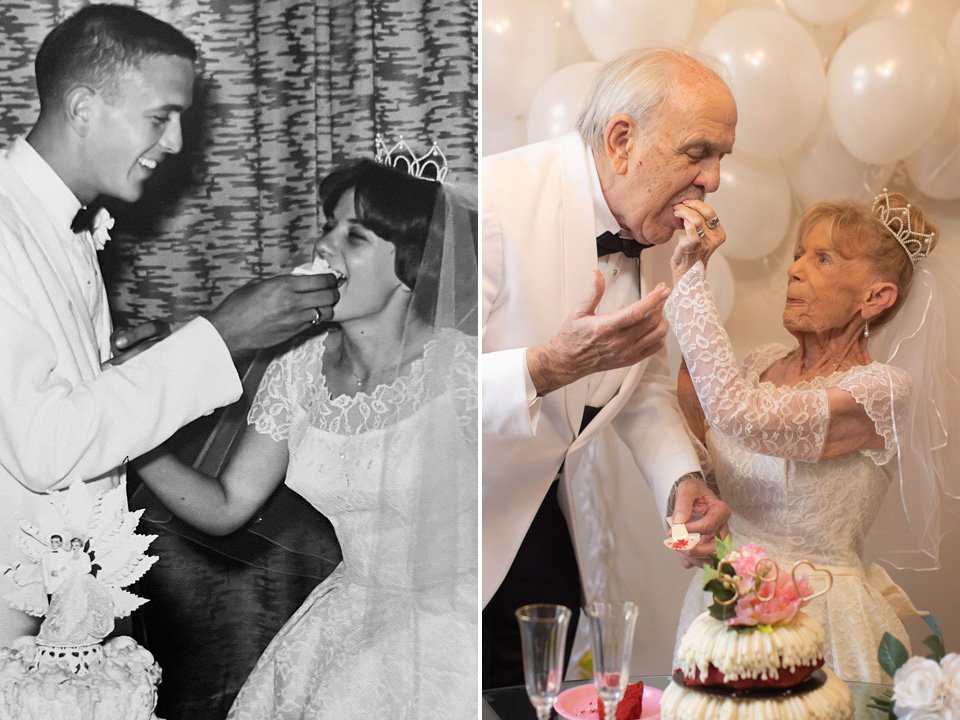 We all love love, especially when it’s clearly stood the test of time.

That’s the case for Karen and Gary Ryan, both 79, who were married 59 years ago.

To celebrate the milestone, the pair decided to recreate their original wedding pictures, and Karen even wore her original dress from back then.

The school sweethearts got married in July 1962 in Pocatello, Idaho, USA, before starting a family with two children and five grandchildren.

Retired teacher Karen said of their photo recreation: ‘It was emotional and I was so nervous, I don’t know why I was nervous. It felt like we were doing the same thing all over again.

‘He looked awesome, exactly how I pictured him 59 years ago.’

While Gary wore a rented tux, the wedding photographers, Nikki and McCall Ryan, his daughter-in-law and granddaughter, ensured it looked identical to the one he wore for his wedding.

Air Force veteran Gary said: ‘It was awesome. She looked beautiful. It put tears to my eyes.

‘It was a lot of fun and it was fun because of who took the pictures and we got to see what McCall and Nikki do for a living when they shoot their own weddings.

‘I was totally surprised at how good it mirrored our pictures from 59 years ago, it’s neat to see them then and now.’

The pair met as teenagers after Karen spotted Gary performing in a school play at their junior high school while in the seventh grade.

Retired teacher Karen said: ‘It was as simple as you can get.

‘We did have a lot of people, there were about five hundred in the church and then five bridesmaids and five groomsmen, one flower girl and one ring bearer.

‘After the ceremony we went into the basement and had cake and punch.

‘The biggest expense was probably the wedding dress.’

Before their anniversary this year, Nikki and McCall, 51 and 26, asked if Karen had any plans to celebrate.

Mum Nikki said: ‘We were talking about their anniversary coming up and Karen said ‘I think my wedding dress is in a box in the garage”, so we went out in the garage and found the box.’

She said: ‘I couldn’t believe it fit me perfectly.

‘The only thing that wasn’t in the box was the big hoop I wore under the dress. It was in perfect condition.’

The plans for the Ryans’ 60th anniversary are to ‘maybe have a big party, or sit in our recliners!’

Karen’s advice for a long marriage is ‘never to go to bed angry, always kiss and make-up.’

Gary added: ‘We all have problems, just help each other and be there for one another always.’