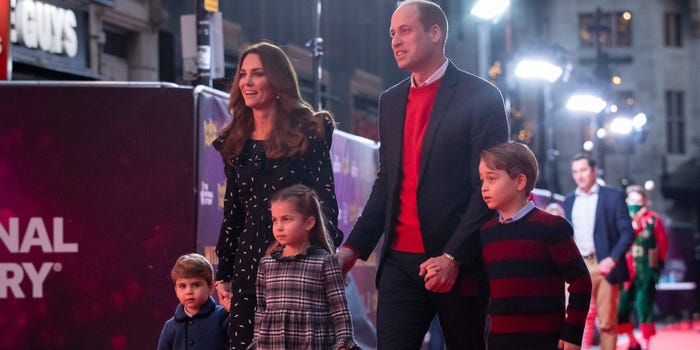 Prince William and Kate Middleton appeared to send out their holiday cards, and the Cambridge family's previously unseen photo is already making its rounds on social media.

On Friday, royal fan accounts on Instagram shared a picture of what appears to be the Duke and Duchess of Cambridge's holiday greeting card with the family's photo and the text "2020" underneath. In the picture, Prince William and Kate Middleton have their arms around their kids — Prince George, 7; Princess Charlotte, 5; and Prince Louis, 2.

The inside of the holiday card is addressed "to all the amazing NHS staff," referencing the UK's National Health Service, according to Hello! magazine.

Hello! magazine also speculated that the family cards may have been gifted to NHS staff during the Cambridge family's appearance at the London Palladium for a charity event on Friday, or during Prince William and Kate Middleton's royal train tour.

Elizabeth Holmes, a royal fashion expert and author of "HRH: So Many Thoughts On Royal Style," identified the family's photo as a Christmas card picture, according to Marie Claire.

In an Instagram story post that's since expired, Holmes mentioned a "photo extravaganza," likely referencing the family's recent red-carpet appearance and accompanying photos. She added: "Their Christmas card pic has been shared on social media. Hoping we get an official release of the high res (we didn't last year tho)."

The Duke and Duchess of Cambridge's 2019 card — which showed the family posed on a motorcycle and sidecar — was also shared by fans on social media after a recipient posted a picture of the card on Twitter.

Kensington Palace did not share an official version of the family's Christmas card as it did in 2018 and years prior.

Traditionally, Prince William, Kate Middleton, and their kids would join the Queen and the rest of the royal family for Christmas at Sandringham — but that won't be the case this year

This year, the royal family's Christmas will look different than celebrations in years prior.

In 2019, Prince William and Kate Middleton joined the rest of the royal family for the traditional festivities at the Queen's Sandringham Estate. The only members who weren't in attendance were the Duke and Duchess of Sussex, who went to California for the holiday after they had announced their step back from public royal duties.

But due to the coronavirus pandemic, Queen Elizabeth II has been isolating at Windsor Castle since March.

Earlier in December, a Buckingham Palace spokesperson confirmed to Insider in a statement the Queen and Prince Philip will remain at Windsor for Christmas — therefore breaking the tradition of the royal family's Sandringham visit, where the Queen has spent the holiday since 1988.

"Having considered all the appropriate advice, The Queen and The Duke of Edinburgh have decided that this year they will spend Christmas quietly in Windsor," the palace spokesperson said.

It wasn't until recently that the Queen reunited with Prince William, Kate Middleton, Prince Charles, and Camilla, Duchess of Cornwall, in the family's first public appearance since March.