Afghans with Australian visas being turned away at ‘diabolical’ Kabul airport

Shaima Azizi has not slept in days. From her home in Brisbane, she has endured a cruel six-day merry-go-round as her family has repeatedly tried to get into the airport in Kabul, and onto an Australian flight to safety.

Her family members have Australian visas, so they should be let in. But it has not happened – and time is running out. Shaima’s 45-year-old mother has been rushed to hospital two times during that period with developments outside the airport – including scuffles, gunfire and more than 10 failed attempts to enter – exacerbating her heart condition. 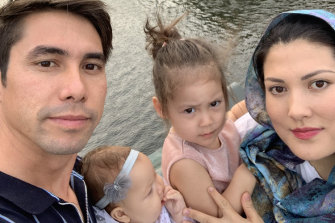 Shaima Azizi, who lives in Brisbane with her husband Mohammad and two daughters, desperately wants to get her mother, brother and sister-in-law out of Kabul.

Overnight the Taliban banned Afghans from fleeing their country and said that the United States must stick to next week’s deadline to pull out, making it all the more difficult for the Azizis – who all have humanitarian visas for Australia – to get into the airport.

And now foreign officials and soldiers at Kabul airport – forced into an impossible situation by US President Joe Biden’s self-imposed August 31 deadline to get people out – appear to be prioritising the evacuation of people with foreign passports over Afghans.

The journey of Shaima’s family over the last six days is illustrative of the wider situation on the ground in Kabul over that time: the trip to the airport has become more dangerous with each day, as people have to navigate Taliban checkpoints, gunfire and violent crowds, and it is now increasingly difficult for Afghan nations to enter the airport.

Last Friday, grasping a letter from an Australian Lieutenant Colonel, 16 of the Azizi’s family members made it all the way inside Hamid Karzai International Airport and tried to apply for asylum in Australia. Her sister Zainab, a television journalist who also worked alongside Australian officials with NATO, says her family was being targeted by the Taliban. 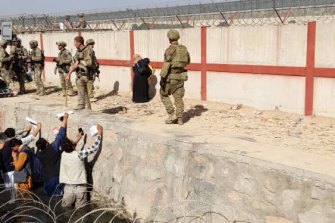 The situation just outside the airport is deteriorating. Afghans with Australian visas are being rejected at the gate.

After they were kicked out of the airport, their mother suffered a heart episode. Shaima’s brother and sister-in-law took their mother to the hospital while the remaining 13 family members camped outside the airport on Friday night.

Over the weekend, all 16 family members had visas to Australia approved – and the 13 who remained were able to get back into the airport and onto an Australian flight to Australia’s military base in Dubai. But Shaima’s mother, brother and sister-in-law missed the flight while still at the hospital. 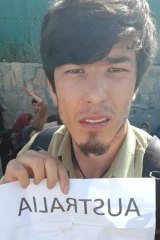 Shaima Azizi’s brother was metres away from Australian soldiers on Tuesday, but couldn’t get inside the airport.

After being let out of hospital, the three family members went back to the airport on Monday and spent all night trying to get into the Abbey Gate entrance leading into the military side of the airport. Shaima says they tried 11 times to enter but were rejected each time. At one point they were metres away from Australian soldiers. But, according to Shaima’s brother, the Australian soldiers told him they needed to show passports, despite having emails from Australia’s Department of Home Affairs confirming their visas had been approved. After their last failed attempt, Shaima’s mother again started shaking and had trouble breathing, and had to be rushed back to the hospital.

The Australian government insists this shouldn’t be happening – that anyone with an Australian visa should be getting allowed into the airport. But based on multiple accounts from people on the ground, this is happening across the board.

Another Afghan with an Australian visa, who cannot be named for security reasons, has been camped outside Abbey Gate for two nights. He also says foreign soldiers are only asking for passports and he has been unable to present them with his Australian visas.

“I saw women and children spend hours there, but they have been evacuated unconscious and waste all the effort,” the person said.

On Tuesday night, the Taliban started shooting at people’s feet outside Abbey Gate, which caused the large crowd to flee with women and children stamped on in the panic.

Officials from Home Affairs have hurriedly approved hundreds of visas in recent days in a desperate attempt to process as many applications as possible. All these Afghans have are emails from Home Affairs telling them they have been approved for visa. It appears that American, British and Australian soldiers – in the heat of the moment – are turning these people away, or at least failing to heed their calls.

Women’s rights activist Susan Hutchinson, who has been helping Afghan women on the ground, said it appeared British and American soldiers who were securing the airport were now on alert for visas that have been forged and were not letting in people without passports.

“This of course is extremely problematic for the women of Afghanistan that world leaders keep saying they want to help, because very few Afghan women have passports,” she said. “Even when we provide additional evidence linking a visa to their national identity card, people at high risk with visas are not being given access to the airport.”

None of this is to say Australian soldiers and officials from the Department of Foreign Affairs and Home Affairs haven’t been doing all they can to get people out of Kabul over recent days. With no embassy on the ground, Australia in just a few days has managed to evacuate 2400 Australian citizens, Afghan nationals and others, including 750 people on four flights on Wednesday night.

Home Affairs Minister Karen Andrews said on Wednesday that Australia would continue to evacuate people as long as it can, but the situation around the airport was “deteriorating hour by hour”.

“We know that the situation is absolutely diabolical, so we will do what we can for as long as we can,” she told radio station 4BC.

In Brisbane, Shaima fears for her mum, still in a Kabul hospital, hopeful that she will one day join her in Brisbane.

“The situation on the ground seems too mismanaged with so much miscommunication. It makes my family think that Australia is not honest enough about what they claim,” she says. “But on the other hand, these soldiers are just human, and trying to do their best.”