Now that you’ve had some time to recover from the revelation that Einstein Bros. Bagels had birthed a Mac & Cheese bagel, here’s some new cheese news: Applebee’s has debuted a Cheetos Burger Bomb burger. Unfortunately, it’s only available in the United Arab Emirates, but roundtrip flights from New York to Dubai are only like $750, so. I think we can make this work.

According to Chew Boom, the Applebee’s Cheetos Burger Bomb consists of a "bacon" cheeseburger of sorts (in the UAE, the bacon is beef bacon, so the shebang is a Thick N Hearty beef patty, lettuce, pickles, onions, sliced cheese, and the aforementioned smoked beef bacon, all piled between a brioche bun) deep fried in a Cheetos tempura batter and topped with Cheetos dust. It sounds insane. It looks insane. It is very definitely insane. I must eat it.

In addition to the Cheeto burger proper, the Cheetos Burger Bomb comes paired with curly fries, a cup of aioli, and cole slaw. It’s listed on the UAE’s "exclusive VIP menu," per Chew Boom, which requires you to enroll as a VIP member in the UAE if you want to be able to sink your teeth into all that fried, cheesy, Cheeto-ey goodness. Not that being a VIP is difficult to do, assuming you’re already in the UAE—Chew Boom says you can just join Applebee’s’ email list, suck up all the annoying promos, offers, and discounts you’ll probably never use that end up flooding your inbox, and be granted access to this delectable secret menu item. 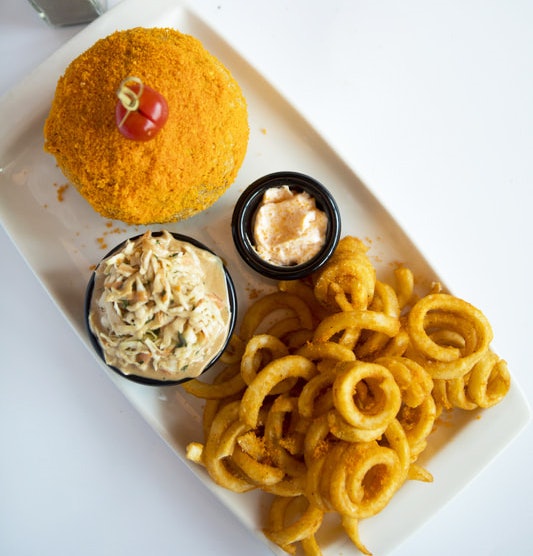 Applebee’s isn’t usually one for secret menu items, but they do have surprisingly good happy hour deals. For a while, I worked near the Applebee’s in Times Square, and while I tend to stay away from both large chains and tourist centers, Applebee’s genuinely had the best happy hour specials in the neighborhood. In part, this was because all the bars around us were either overpriced Irish pubs catering to businessmen, or at Guy Fieri’s standout "Guy’s American Bar & Grill," may it rest in peace. (There was also a Senor Frogs in Times Square. It was amazing, if very short lived.)

But at Applebee’s, you could get a Long Island Iced Tea for maybe $5, maybe $1 if there was some kind of deal — and those drinks are strong, plus they come in a goblet, so you feel fancy as heck. To counteract all that alcohol, Applebee’s has a pretty good selection of half-priced apps, like boneless chicken wings, little quesadillas, soft pretzels, and nachos. In the end, Applebee’s happy hours were most cost-effective than going to Rosie O’Grady’s and getting a beer and some fries, although my sodium intake was maybe not so great at the time. Such is life.

Most importantly, though, Applebee’s was featured prominently on the bespoke American television program Friday Night Lights, which was recently taken off Netflix and caused me some serious loss-related heartbreak. Applebee’s is good. Friday Night Lights is great. The United Arab Emirates seems like a very long flight away for me to try a Cheetos Burger Bomb, but it is also a good stopover point on your way to Bali or Nepal, both of which are places I would very much like to visit, so why not throw a deep-fried cheese burger bomb in the mix?

Of course, it’s very possible we here in the States will also be blessed with a Cheetos Burger Bomb. The whole thing feels very American, after all, plus Cheeto dust is basically our form of salt and pepper seasoning. Fingers crossed, fam; I got some eating to do.