Arson, murder, suicide: The X-rated truth behind the Chippendales

They were named after England’s most celebrated cabinet maker to evoke ‘pure class’, but while the Chippendales certainly managed to replicate the solid, well-oiled heft of a Thomas Chippendale wardrobe, sophistication wasn’t a strong point.

A typical performance in their 1980s heyday involved the oiled, heavily muscled dancers strutting out on stage in their trademark bow ties, collars and cuffs, in a nightclub packed with hundreds or thousands of frenzied women baying, ‘We want meat!’ or, ‘Take it off!’

The ladies wouldn’t have to wait long before the men stripped down to their G-strings and strode into the audience to kiss the clientele. There was only one rule: no touching.

Tipping technically wasn’t allowed, but grateful punters usually showed their appreciation by slipping bank notes into the nearest posing pouch. Some women would ask to do a lot more — and were often successful — but that was strictly behind the scenes: on stage, the G-strings remained firmly in place.

And the essence of the cheesy U.S. stage act as glitzy and raunchy but not obscene helped earn the Chippendales international stardom that spawned a multi-million-dollar empire. 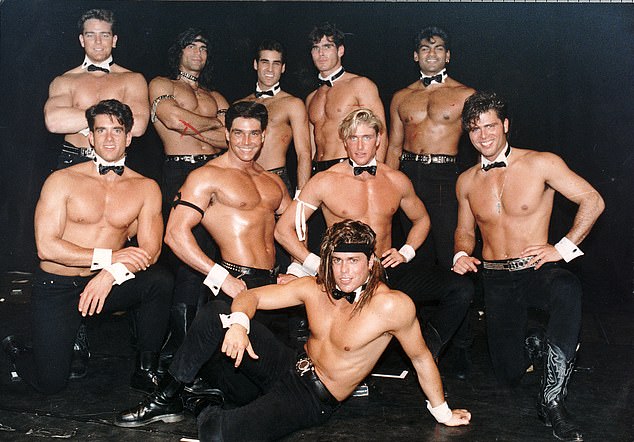 The Chippendales were a male exotic dance troupe founded in the late 1970s that became a global phenomenon but their glitzy image belied dark goings on behind the scenes, a new podcast reveals

After decades in which feminists had largely managed to throttle striptease as irredeemably sexist, the Chippendales offered the perfect rejoinder by showing that women could enjoy it, too. Some argued that the Chippendales were feminist.

They paved the way for other male striptease acts and inspired The Full Monty, the endearing 1997 British comedy film about a group of unemployed Sheffield steelworkers who decide anything a bunch of Californian gym bunnies can do, they can do better.

However, there was another side to the Chippendales story that was hardly ripe for comedy. ‘It wasn’t just pecs and mullets and G-strings stuffed with dollar bills,’ says historian Natalia Petrzela, who spoke to dozens of Chippendales insiders for a new podcast series about the colourful act.

‘It was a sordid world of greed, arson, hired hitmen, a years-long FBI manhunt and a feud that would leave two business partners dead.’

Her investigation into its less-than-glittering history, detailed in the Welcome To Your Fantasy podcast (the title borrowed from one of the Chippendales’ advertising lines), comes just as Hollywood prepares to get its teeth into the tale. 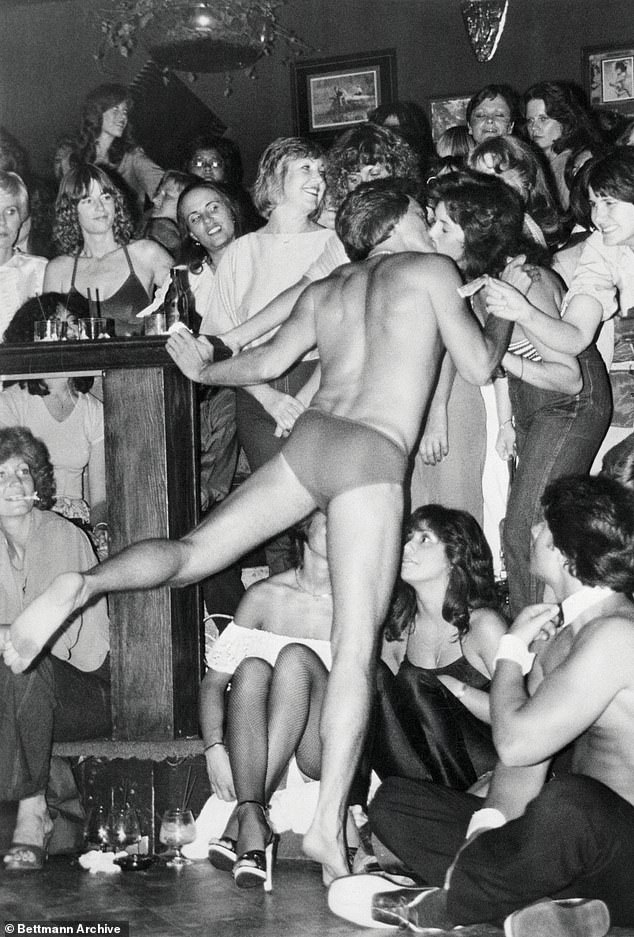 Tipping technically wasn’t allowed, but grateful punters usually showed their appreciation by slipping bank notes into the nearest posing pouch. Some women would ask to do a lot more — and were often successful — but that was strictly behind the scenes: on stage, the G-strings remained firmly in place

In the forthcoming feature film Chippendales, British actor Dev Patel is set to play the Indian-born nightclub owner Steve Banerjee, who dreamt up the act. It will be directed by Craig Gillespie, who made the Oscar-winning film I, Tonya, about scheming Olympics ice-skater Tonya Harding.

The real Banerjee was born Somen Banerjee in Mumbai, later emigrating to California.

After working as a caretaker and running two petrol stations, in 1975 the shy-but-ambitious entrepreneur took over a failing Los Angeles bar called Destiny II.

It was the first club of its kind and it worked spectacularly well. In 1979, Destiny II was reborn as Chippendales. Its main attraction — ‘Male Exotic Dance Night for Ladies Only’ — rapidly drew a huge crowd of women ready to stump up $20 for the chance to watch, kiss and saucily pay tanned and glistening hunks wearing tight, skimpy underwear.

Snider scoured the city’s gyms and beaches looking for muscle-bound talent. In the beginning, there was no racial diversity. ‘Banerjee wanted a classy club and, for him, classy meant white,’ says Petrzela.

Snider’s wife, Dorothy Stratten, a former Playboy Playmate of the Year, suggested the Chippendales’ outfits — such as they were — and they were clearly inspired by the collars and cuffs worn by Playboy Bunnies. 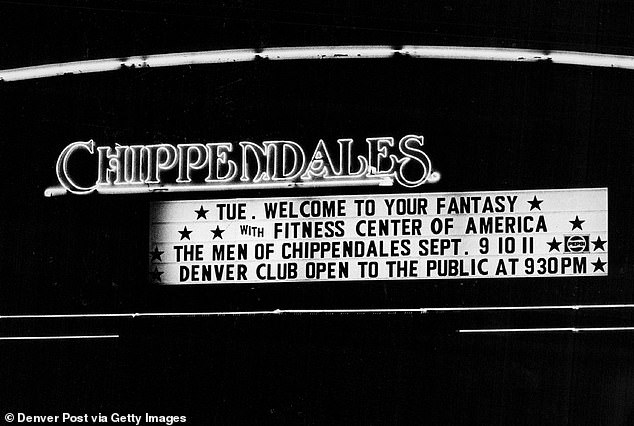 The darkness that would envelop the Chippendales started almost immediately when, in 1980, Snider shot dead his wife, by then estranged from him and romantically involved with Peter Bogdanovich, the director behind The Last Picture Show and Paper Moon.

Snider, who had raped her before blasting her with a pump-action shotgun, then killed himself. Their bodies were found lying side by side.

But the grisly deaths did nothing to halt the unstoppable march of the Chippendales.

In 1981, with the club drawing queues that stretched around the block, Banerjee realised the venture could be easily expanded.

He took on a partner, Nick De Noia, an Emmy-winning children’s television producer, as a choreographer who could turn the amateurish act into a spangly affair worthy of Las Vegas. He kitted out the men in Spandex, dressing them up as builders, Superman and even flashers in dirty trench coats.

The Chippendales started to tour and a second club was opened in New York. Others followed in Denver and Dallas in 1983.

The business was soon earning $8 million a year from club receipts, touring companies and Chippendales calendars. But success spawned rivals. From the early days of Chippendales, Banerjee hired thugs to burn down other male strip clubs.

He was also ruthless with his lawyers, suing anyone he could find for breach of copyright, including a New Mexico DJ who, as a joke, formed a group of 16 st strippers called the Chunkendales.

Yet arson would soon turn to murder. He and De Noia never got on, arguing over money and control of the venture.

As detailed in Welcome To Your Fantasy, their differences dated back to an early deal in which De Noia proposed launching a New York branch and taking half the revenue. 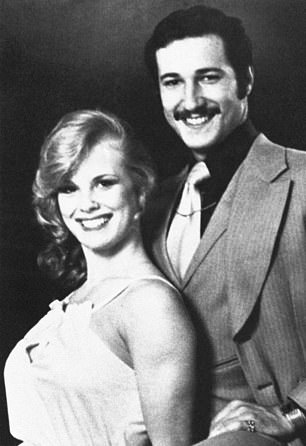 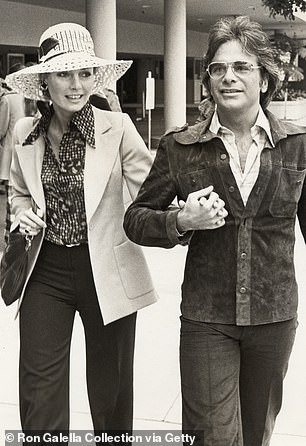 ‘Nick wrote on a napkin that he had the right to take Chippendales on the road and own it in perpetuity,’ former Chippendales review host Dan Peterson told the podcast.

‘Steve signed it and [gave] away the most profitable part of the business because he did not know what ‘perpetuity’ meant.’

Banerjee bitterly resented the amount of money that De Noia was making from Chippendales tours and the fact that the flamboyant producer — who was married to actress and model Jennifer O’Neill — was hogging all the attention. He would be the one invited on chat shows to talk about the Chippendales phenomenon while Banerjee, who suffered from a stutter, remained in the shadows feeling deeply hard done by.

Meanwhile, financial issues were piling up, including mountainous unpaid taxes, a $70,000 bill for reprinting a Chippendales calendar that had 31 days in every month, and a lawsuit from De Noia when Banerjee launched his own Chippendales touring act. 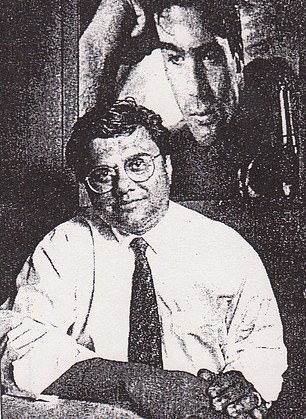 Indian-born nightclub owner Steve Banerjee (pictured), dreamt up the act but became consumed with bitterness towards his business partners

In 1987, Banerjee asked a ‘tough guy’ friend from the Bronx to have his estranged business partner ‘rubbed out’.

He mistakenly thought his chum had Mafia connections and would have the job done with a little subtlety, but instead the task was given to a drug-addled amateur who strode into De Noia’s office one afternoon and fatally shot him in the face as he sat at his desk.

However, the police investigation failed to uncover the truth and De Noia’s family later sold his share of the business to Banerjee for a knockdown $1.3 million. Having apparently got away with murder once, he decided to kill the ‘beefcake’ competition, too.

He was particularly incensed by Adonis: Men Of Hollywood, a rival U.S. act containing several ex-Chippendales and which was focusing on the UK market.

In 1990, through the same friend who had arranged De Noia’s murder, he hired another amateur hitman to kill two key members of Adonis while they were performing at the Winter Gardens in Blackpool.

Unfortunately for Banerjee, the would-be killer instead contacted the FBI upon arriving in the UK.

He told them he’d been advised to inject them with cyanide and was given some in an eye-drop bottle that would hopefully get past British customs.

After killing them, he was supposed to ring his employers with the cryptic message: ‘I signed up that draft choice from the south.’

Banerjee was arrested as the plotters were rounded up, and those who knew the soft-spoken family man expressed disbelief that he would ever stoop to such crimes. 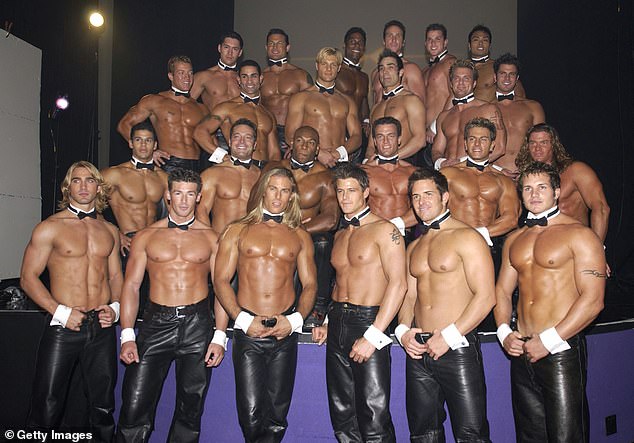 Under new owners, the act relaunched in 2000, performing at a $10 million theatre on the Las Vegas Strip to annual crowds of some 250,000. Pictured: Chippendales dancers are pictured in Las Vegas in 2002

‘The basic theme of the indictment is that anybody or anything that got in Banerjee’s way, he would hire somebody to kill or burn the competitor,’ said Charlie Parsons, an FBI special agent in charge of the Los Angeles office.

In a 1993 plea deal, prosecutors dropped the Blackpool-related charges against Banerjee in return for him admitting to plotting the murder of Nick De Noia as well as attempted arson and racketeering offences.

Prosecutors claimed he had also planned to have his other business partner, lawyer Bruce Nahin, killed.

Banerjee was facing 26 years in prison as well as the loss of most of his fortune, including his share of the Chippendales, when in October 1994, he was found dead in his jail cell.

He had hanged himself with a bedsheet.

The tastes of hen nights have largely remained unchanged, however, and the Chippendales live on.

Under new owners, the act relaunched in 2000, performing at a $10 million theatre on the Las Vegas Strip to annual crowds of some 250,000.

You clearly can’t keep a good idea down.