ASOS has been accused of ‘ripping off’ an independent jewellery brand’s design after it was rejected from the retailer’s Marketplace site.

Studio Cult, based in New York City, took to Twitter to share screenshots of its ‘flame earring’ design alongside that of the international retailer, writing: ‘They took our best selling Flame Earring design and claimed it as their own on their website.

‘The listing states that it was exclusive, was labeled “ASOS DESIGN” and “Selling Fast”.’

ASOS Marketplace is a section of the site where independent brands and vintage sellers can advertise their products.

A spokesperson for ASOS told MailOnline: ‘We take any claims of intellectual property infringement incredibly seriously. When we were first notified of Studio Cult’s concerns we immediately removed the product from site while we looked into the matter with the relevant supplier. 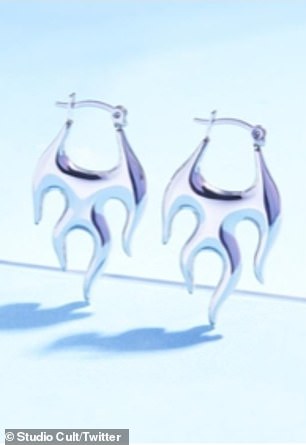 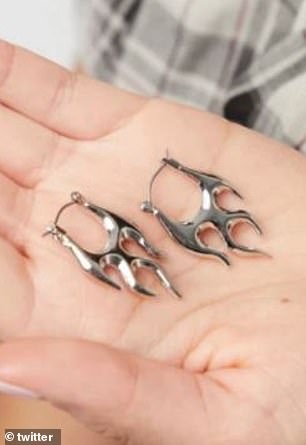 Studio Cult (left), based in New York City, took to Twitter to share screenshots of its ‘flame earring’ design alongside that of that of ASOS (right)

‘We can confirm that ASOS had no involvement in the design of this product and our Marketplace team shared no information on Studio Cult with those responsible for buying the product, as Marketplace operates separately to the rest of the business.’

Not all products labelled ASOS Designs are produced by the company itself, with some items designed and made by third parties.

The independent boutique shared an email of its original rejection email which was addressed to 26-year-old Creative Director Yuliya Veligurskaya. 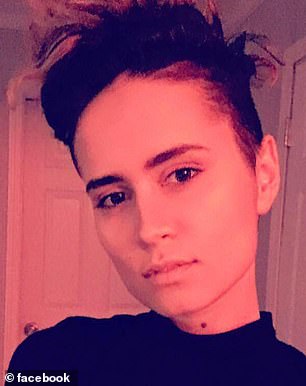 It read: ‘Thank you for applying for an ASOS Marketplace boutique.

‘After careful review, we have decided not to proceed with your application at this time as we have too many similar boutiques already on our site.

‘We do our best to ensure that all of our boutiques have a good chance of selling their product without being in heavy competition with each other, as well as ensuring we have a diverse product mix for our customers.

‘If we feel that there is a gap for your boutique in the future we will get in contact with you about joining Marketplace.’

And social media users were quick to spot the similarities between the two after the post was also shared on Instagram. 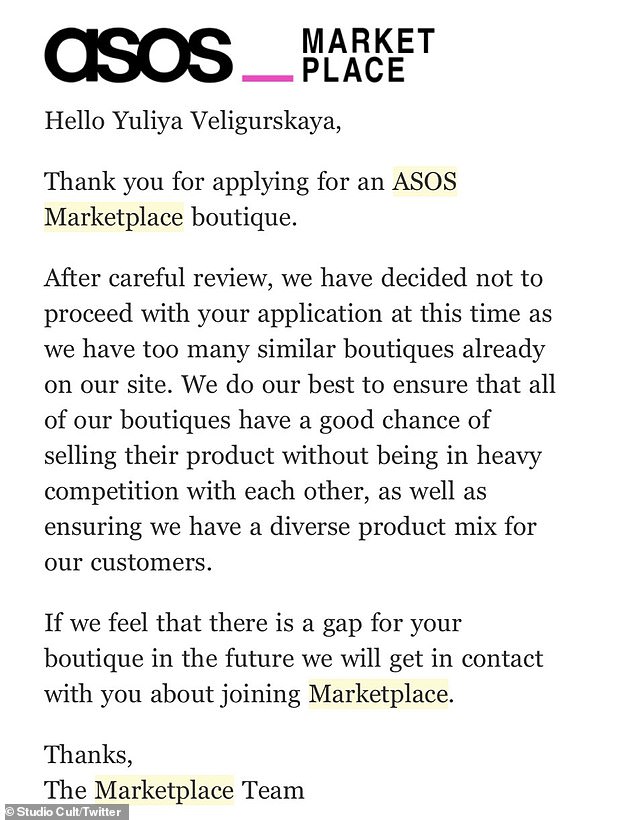 One user wrote: ‘This is just insane. I’ve been following y’all for years. I can’t believe this is happening to y’all. Boycott ASOS!’

Another added: ‘Hate this s*** they’re a big company, they should be able to make something without ripping off cool creators like y’all.’

And a third commented: ‘So looks like I won’t be buying from them until they can take responsibility for what they did cause this is just awful (plus I’ve been eyeing this brand for a while and now they’re designs get stolen?!).’ 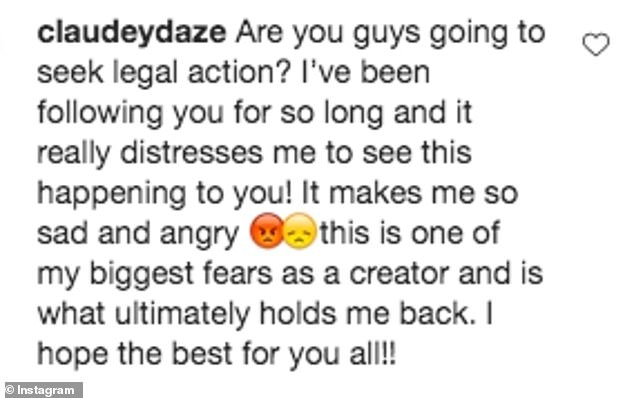 Studio Cult later updated followers to say that ASOS had removed the earrings from sale on its website since the complaint.

But the brand continued to state that this would not be the end of the matter.