Pfizer is now the preferred vaccine for people aged under 50, Australia’s medical experts have decided after a lengthy meeting to discuss a rare but serious blood clotting side effect linked to the AstraZeneca vaccine.

The government is now reviewing Australia’s vaccine portfolio as the entire rollout will require an overhaul, the country’s top medical officials said. 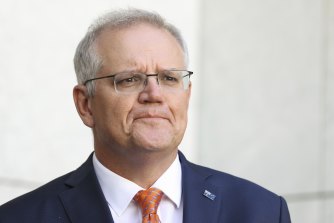 Australia’s decision follows changes by European medical regulators after a review of data confirmed a rare blood clotting condition seen in a small number of patients was linked to the AstraZeneca vaccine.

Chief Medical Officer Professor Paul Kelly said the rare but serious blood clot disorder was discussed in the meeting, taking into account what was decided overseas and looking at what that would look like in Australia.

“This is a rare event,” he said. “But it is serious and can cause an up to 25 per cent death rate when it occurs.”

“It is a vaccine that is very, very effective,” he said.

The Australian Technical Advisory Group on Immunisation met on Thursday night to consider the medical evidence and issued new advice on the AstraZeneca vaccine, which it provided to the government just after 7pm.

Prime Minister Scott Morrison said they accepted the experts’ advice and “made decisions in the best interests of Australians”.

The European Union’s medical regulator listed blood clots as a very rare side effect of the AstraZeneca vaccine, and the UK regulator has decided to offer an alternative shot for those aged under 30.

On Thursday morning, the Prime Minister said the risk of severe side effects with the AstraZeneca vaccine is much lower than with common drugs including paracetamol and the oral contraceptive pill.

Mr Morrison said it was important to know the risk of developing venous thromboembolism was much lower following the AstraZeneca vaccine than the risk of death from COVID-19.

“Let’s note that in the UK, the advice is that some 6000 people’s lives have already been saved by this very vaccine. So we need to consider the positive benefits,” he said.

From UK data, the risk of venous thromboembolism following the vaccine was about one to five per million people.

“To put that in some sort of perspective, the combined oral contraceptive pill, that can include adverse side effects of venous thromboembolism – that’s seven to 10 per 10,000,” Mr Morrison said.

The advice has been shared with the expert medical panel, the Australian Health Protection Principal Committee, which is comprised of all state and territory chief health officers and led by federal Chief Medical Officer Professor Paul Kelly.

The matter will also be discussed in national cabinet on Friday and in meetings with state and territory health ministers, who were due to meet on Thursday night to discuss the revised advice and its implementation.

On Wednesday 75,811 doses were administered across the country, Health Minister Greg Hunt said on Thursday afternoon, taking the national total to 996,145 doses administered so far during the rollout.

The states and territories have administered 509,802 doses. Through the federal government, 486,343 doses have been administered, including more than 361,000 through primary care and 125,260 through aged care.