Australia needs ‘as many incentives as we can’ to get people vaccinated: CMO

Australia’s top medical officer says as many incentives as possible are needed to ensure most of the population gets immunised against COVID-19, but a proposal to use vaccine passports for interstate travel has come under fire from MPs across the political spectrum.

Chief Medical Officer Professor Paul Kelly’s comments came as the head of Home Affairs confirmed there would be no significant international border reopening before June 2022. 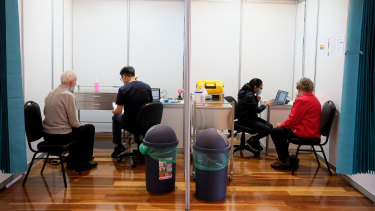 Chief Medical Officer Professor Paul Kelly says all ideas are “potentially on the table” to try to encourage hesitant people, particularly within the 50-69 age group, to get immunised.Credit:Getty

Professor Kelly said with the pandemic largely contained in Australia, the government needed to find ways to encourage more people to get the vaccine.

“We really do need to look for incentives – as many incentives as we can – for people to become vaccinated,” he said on Monday afternoon.

With the federal government under pressure for its communication campaign around the vaccine rollout, some public health and advertising experts have suggested offering inducements such as lottery tickets, discounts and cash bonuses.

Professor Kelly on Monday said all ideas were “potentially on the table” to encourage hesitant people, particularly within the 50-69 age group, to get immunised.

“Some of these incentives will be talked about in coming days and weeks, but I think the main incentive is because it’s going to actually protect you, your family and the community,” Professor Kelly said.

An exclusive survey for The Sydney Morning Herald and The Age by research company Resolve Strategic found 14 per cent of people were “not at all likely” and 15 per cent “not very likely” to sign up for vaccines in the next few months, even if they were available. Older people were the most reluctant.

So far, more than 3.6 million vaccine doses have been administered across the country.

Prime Minister Scott Morrison confirmed the idea of a vaccine passport would be discussed at next week’s National Cabinet meeting, but Labor leader Anthony Albanese said it was a poorly conceived thought bubble.

“What are you going to do? Have passport police set up between Tweed Heads and the Gold Coast? I mean, for goodness sake,” he said on Monday morning.

One Nation leader Pauline Hanson and Queensland Nationals senator Matt Canavan were both concerned such a plan would in effect create two classes of citizens.

Crossbench senator Rex Patrick said it was a distraction from issues with the rollout.

“Once we’ve got enough people who have signed on to get the vaccine, I think all these issues of passports go away,” he told Sky News.

Independent member for Indi Helen Haines, who represents the Victorian border community, asked Mr Morrison to give an “iron-clad guarantee” the federal government would not introduce a vaccine passport scheme.

“The Prime Minister’s recent comments about a vaccine passport for interstate travel have alarmed my constituents,” she said on Monday afternoon. “Such a passport would impose extraordinary hardship on our community once again.”

Mr Morrison said it was a good idea to allow fully vaccinated people to move across state borders despite any border restrictions that might have been put in place.

“I would have hoped that that would be a good suggestion, particularly for those living in border communities where they have been fully vaccinated and in the rather extreme situation if border arrangements were put in place by state governments,” he said.

NSW Premier Gladys Berejiklian said it was more important to focus on the job of getting people immunised.

Home Affairs boss Michael Pezzullo confirmed there would be no significant reopening of the international border before June 2022, but said travel bubbles with Singapore and Pacific countries were a possibility before then.

”The gradual removal of restrictions on Australians’ ability to travel internationally at scale, when conditions allow, will require significant preparation, including by way of collaboration across Australian government departments and agencies and with states and territories, airlines, airports, and international partners,” he said.

Mr Pezzullo also told a Senate estimates hearing on Monday work was under way to establish a “Digital Passenger Declaration”, which would include information about a person’s health and vaccination status. He said the DPD could mean citizens would not have to quarantine on return to the country if they had been vaccinated in Australia.

“At the appropriate time, subject to public health advice, this [DPD] could support Australians’ ability to travel without the need for 14 days’ quarantine on return, including by providing additional assurance to support the future delivery of potential alternatives to hotel quarantine,” he said.