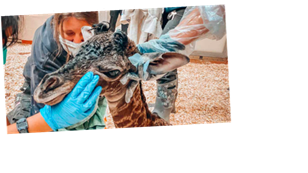 A baby giraffe at the Nashville Zoo died “shortly after birth” on Saturday after her mother, named Nasha, accidentally stepped on her, the zoo announced. A necropsy showed trauma to the newborn’s neck, the zoo said in a press release, adding it will complete further testing to “determine if there were any underlying causes” for her death.

The calf seemed to be “thriving” following an initial exam after birth, Dr. Heather Schwartz, the zoo’s director of veterinary medicine, said in the release.

“We moved the newborn to be with her mother and the two were bonding. During this time, Nasha may have inadvertently injured her calf,” Schwartz explained. “The giraffe keepers noticed that the calf was in distress.”

The zoo explained that their animal care team intervened, but couldn’t save the calf’s life.

The zoo posted on social media on Saturday, first sharing the news of the calf’s birth and later death. “Thank you all for your support over the past few weeks and especially during this tough time,” the zoo said in an Instagram post announcing the newborn giraffe’s death.

The birth, Nasha’s first, had also not gone smoothly before the loss.

The zoo said that not soon into her labor complications developed and Nasha was “not progressing appropriately with her delivery.” But, veterinary professionals intervened and were ultimately able to successfully deliver the baby giraffe.

“We are devastated over the loss of Nasha’s calf,” said Nashville Zoo’s president and CEO, Rick Schwartz, according to the release. “Our staff has worked tirelessly to make sure this calf was given the best possible care. We moved from fear of a stillborn to joy of revival to anguish.”

The zoo said Nasha is “doing well” in the aftermath, adding that staff will give her “an abundance of comfort and care” over the following days.

The loss was shared by many outside the zoo’s walls as well.

People around the world had been following along with the giraffe’s pregnancy online and thousands had tuned in to her labor through a live online feed, the zoo said. A local Nashville television station installed three cameras to allow the public access to Nasha’s pregnancy and birth, the release said.