Bada Bing or bada bust? First reviews of The Sopranos prequel are here

The Many Saints of Newark, creator David Chase’s much-anticipated return to the beloved characters he farewelled with a confounding cut to black in 2007, premiered in the US and the UK on Tuesday. But with local cinemas closed during lockdown, Australian viewers will have to wait till November 4 for the film’s release. 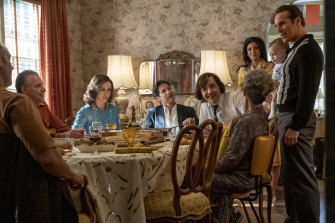 Michael Gandolfini (seated, at right) as Tony Soprano, with other cast members of The Many Saints of Newark.Credit:Barry Wetcher / Warner Bros

While the delay might make you angrier than Tony in a therapy session, we can at least dive into the early verdicts.

Perhaps to be expected of a film that comes with the hefty baggage of a TV series considered among the greatest ever, the early reviews have been decidedly mixed. The wider consensus? That it would’ve made a better TV show.

Writing for Slant, Jake Cole said the film, with its extensive cast and frequent shifts from family melodrama to slick action, gives “the impression of a TV season’s worth of content crammed into two hours, reducing each storyline to its barest essence of savagery and remorse”.

CNN’s Brian Lowry shared that sentiment, particularly over the film’s expansive world-building, noting that “modern movies seldom leave audiences clamouring for more, but in the case of Many Saints, it might have been necessary”.

A star is born

You can imagine the emotional turmoil that’d come with taking on your late dad’s iconic role, but the critics’ verdict is that Michael Gandolfini – James Gandolfini’s now 22-year-old son – is a revelation in the role of young Tony Soprano.

The Guardian’s Peter Bradshaw called Gandolfini’s take “goosebump-inducing”, while Indiewire’s David Ehrlich said the performance is “such a lived-in riff on his father’s most famous role that it completely transcends the gimmicky task at hand”.

Gandolfini already impressed in a small supporting role in the Russo Bros’ recent Cherry, indicating an affinity for his dad’s scene-stealing intensity, but this sounds ever-more promising.

Perhaps among the more intriguing revelations to emerge from early reviews is that the film is narrated from beyond the grave by one of its titular namesakes, the series’ perennial screw-up Christopher Moltisanti, played with endless charm by Michael Imperioli.

Considering the film is centred on Christopher’s hotheaded dad, Dickie Moltisanti (Alessandro Nivola), it makes complete sense. But it’s a beautiful surprise, regardless. Michael Imperioli should be in everything, all the time.

Did we even need Tony’s origin story?

It was always perhaps the obvious idea for a spin-off, but what exactly do we get from a Carrie Diaries about Tony Soprano? Not a lot, say the critics.

Decrying the film’s uniform tone, Variety’s Owen Gleiberman suggested that in its mission to explain Tony’s dark origins the movie loses a lot of the show’s “fun”. That idea was echoed by AV Club’s A.A. Dowd, who questioned: “Where’s the prickly psychology, the gaspingly funny midnight-black humour, the dimension Chase brought to every corner of a corrosively amoral criminal empire?”

She also implied the film’s “inconclusive conclusion” leaves it open to another installment, which reeks of HBO money-spinning. Welcome to The Sopranos Cinematic Universe.

If nothing else, it seems the Australian delay at least allows us to manage our expectations. But will COVID and some critical indifference stop us from watching? Fuhgeddaboudit.

The Many Saints of Newark opens in local cinemas on November 4.