Baker wows with her five-ingredient recipe for Oreo cheesecake cookies

Baker, 26, wows with her simple recipe for Oreo cheesecake cookies – and you can make your own with FIVE ingredients

The 26-year-old, who is the founder of FitWaffle Kitchen, an Instagram page dedicated to decadent desserts that take just a few minutes to prepare, has amassed almost 25,000 likes on the clip since it was shared on October 17.

In it, the self-taught chef from London whips up a batch of the indulgent biscuits from butter, cream cheese, granulated sugar, plain flour and a pack of the iconic chocolate biscuits.

Ms Head, who shot to online stardom when a baking craze swept the globe during the first COVID lockdown, makes the cookies by hand without an electric mixer and says they are easy enough for anyone to do the same – even baking beginners. 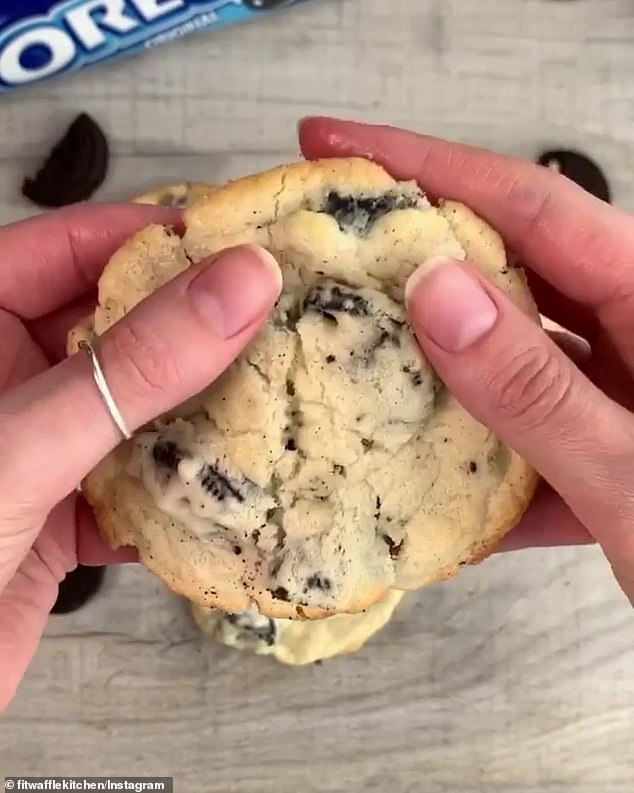 Eloise Head’s five-ingredient Oreo cheesecake cookies, which can be made by bakers of all skill levels – even beginners

‘If you love Oreos you need to try these – you don’t even need eggs,’ she wrote in the caption.

To make the cookie dough, Ms Head whisks 115 grams of unsalted butter with 115 grams of cream cheese until the texture becomes light and fluffy.

Then she adds 200 grams of sugar followed by 120 grams of flour in thirds, gently folding in until just combined.

Next, Ms Head mixes broken Oreos into the dough before leaving the mixture to set in the fridge for roughly one hour.

1. Whisk butter and cream cheese until the texture has become light and fluffy.

2. Add sugar followed by the flour in thirds, gently folding in until just combined.

3. Mix broken Oreos into the dough before leaving the mixture to set in the fridge for roughly one hour.

4. Once the dough has hardened, scoop about a teaspoon of the mixture onto a greased baking tray.

Once the dough has hardened, she scoops about a teaspoon of the mixture onto a greased baking tray then bakes in the oven at 160 degrees Celsius for 10 to 12 minutes.

The cookies are fully cooked when the edges turn golden.

Photos of the treats have drawn dozens of delighted responses since they were uploaded last week, with some followers declaring them Ms Head’s ‘best dessert yet’.

‘Oh my god, my diet is now NOT starting today,’ one woman wrote.

‘It’s now midnight where I am and I just finished eating. But now, I think I want to make some cookies,’ added another.

A third called them her ‘favourite things to make’. 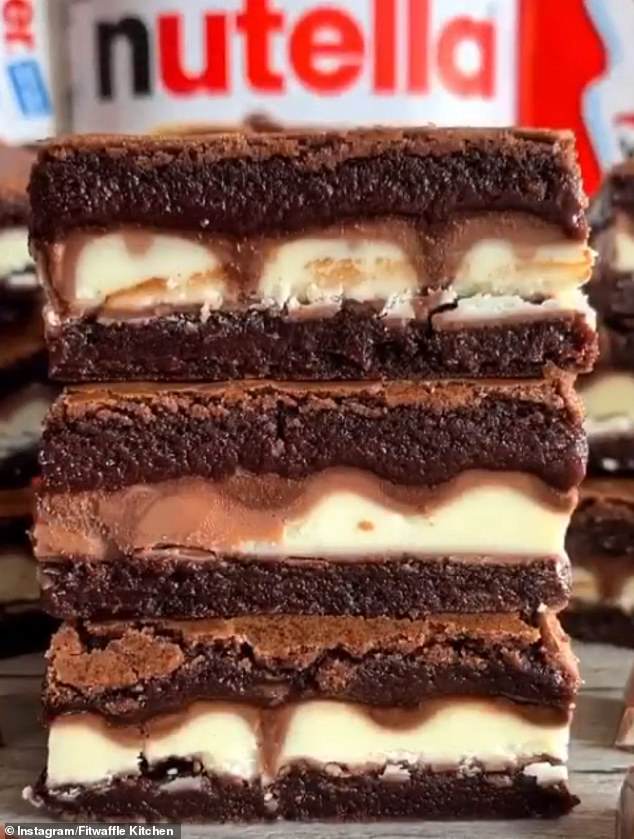 Self-taught baker Eloise Head’s Nutella and Kinder stuffed brownies, made from simple supermarket ingredients, 27 bars of the children’s chocolate and a jar of the iconic spread

Simple desserts have never been more popular since an unprecedented baking craze swept the world during the first months of the coronavirus crisis when hundreds of millions were confined to their homes.

Isolation paid dividends for influencers like Eloise Head, who has amassed a combined following of 743,000 across her two Instagram accounts by sharing delicious dishes that are quick and easy to make.

Her fans have been quick to express their gratitude in return.

‘Your page definitely worked for me, never thought I’d learn how to bake,’ one man wrote in the comments section last week.

‘I was a lost cause but doing lockdown, I stumbled on your page and baking has helped me out.’

3. Once combined, spoon half the mixture into a lined baking tray.

4. Add a layer of Kinder chocolate – 27 bars, laid out whole – and Nutella that’s been gently warmed in the microwave, then cover it with the second half of the brownie mix.