OVERDRAFT borrowers have been warned to pay off their debts now as banks are set to hike overdraft interest rates to up to 49.9 per cent over the next few weeks.

Temporary lower rates introduced by the majority of banks to help struggling borrowers get through the coronavirus crisis are due to end from this month. 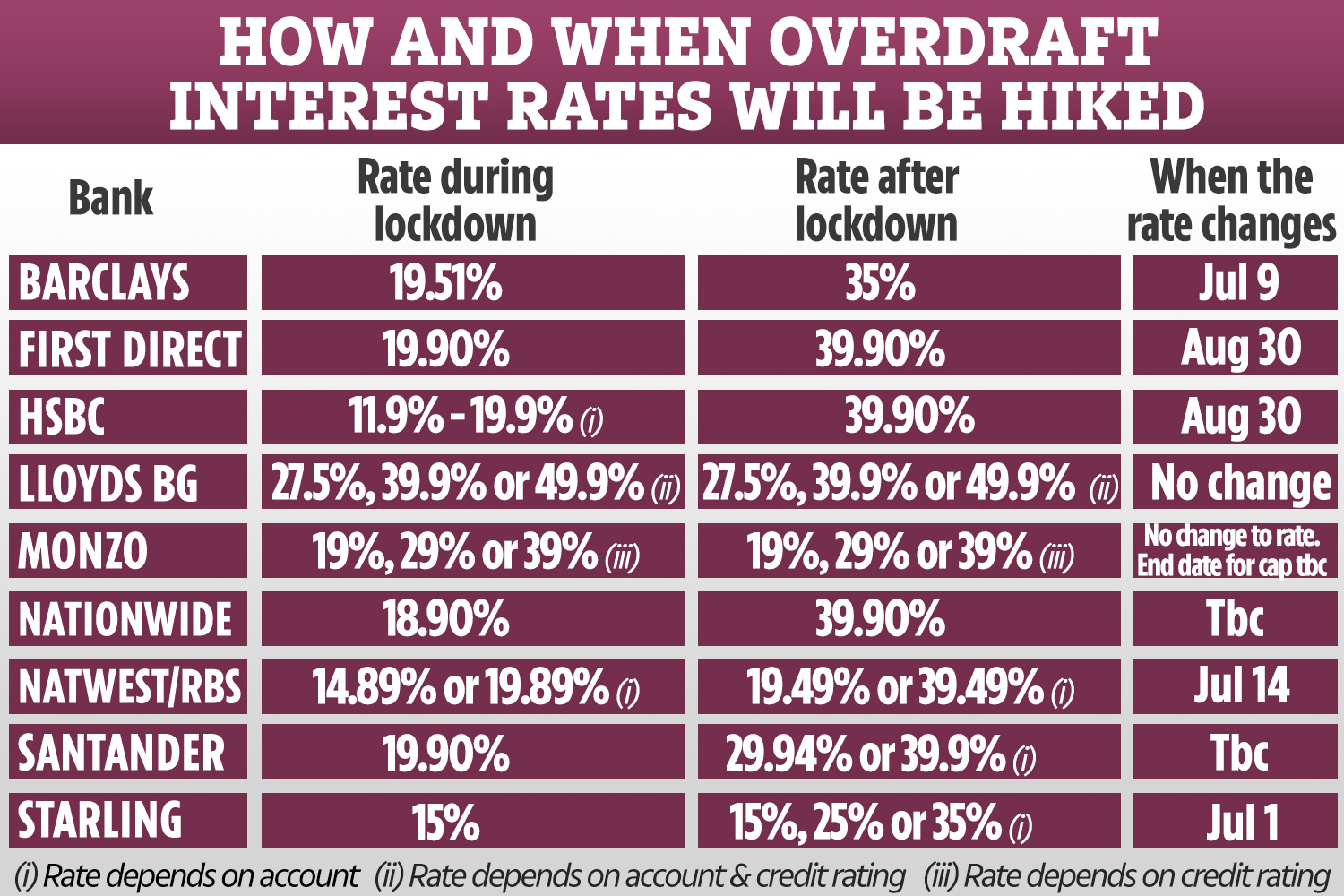 Meanwhile, arranged interest-free overdrafts of up to £750 are also due to end soon unless you apply for a further three months' extension.

This means fail to pay off your debts now or seek further assistance from your bank and you could be stung by pricey charges.

From April 6, new rules meant banks could no longer charge fees on overdrafts, which saw many switch to pricey interest rates instead.

HERE are the help pages for all the major banks so you can see what help you may be eligible for – and how to apply for it.

The idea was to make it easier for borrowers to compare overdrafts to pick the best deal, but three in ten – or 7.8million – were left worse off as a result.

So when coronavirus hit, city watchdog the Financial Conduct Authority (FCA) warned banks to ensure borrowers weren't in a worse position compared to before the new overdraft rates came in.

First Direct, HSBC, Nationwide, and Santander, for example, all temporarily lowered their new 39.9 per cent interest rates to between 18.9 per cent and 19.9 per cent.

But First Direct and HSBC have confirmed rates will revert back on August 30, and Nationwide and Santander are expected to follow suit.

What is a payment holiday and should you apply for one?

PAYMENT holidays are when a lender agrees to pause your monthly repayments for a set amount of time.

This has to be agreed in advance, so don't stop making your repayments until your bank has given you permission to do so.

The majority of lenders are now offering payment holidays, so get in touch with your bank to find out what help it can give you.

Most of the time, it'll require you to fill out an online form.

Typically, payment holidays are offered in extreme circumstances and are designed as an emergency measure to help you through a difficult financial time.

If you think you need to take one, you should speak to your lender to discuss your options – but do note that the break in payments doesn’t remove any debt or financial obligations.

Most lenders will also still charge interest during this time, so be aware that these costs will keep building up.

You should also always continue to make your normal payments if you’re financially able to.

Sue Anderson, head of media at debt charity StepChange, said: “If you can continue to make your normal payments without difficulty, then you should.

“Any temporary measures being offered by lenders don’t remove financial obligations – they are designed as an emergency measure to help you get through a period where your income may have taken a serious knock.

“However, if you need to use them then you shouldn’t hesitate to talk to your lenders.

“While taking a payment break would usually be noted on your credit file, the credit reference agencies have confirmed that, during the current crisis, this should not have a future influence on your credit status.”

Monzo's rates will stay the same but during the crisis it has capped arranged overdraft fees at a maximum of £46.50 a month, which is expected to end shortly.

Lloyds Banking Group hasn't reduced its up to 49.9 per cent interest rate as it says the vast majority of customers are better off on this structure compared to its old system.

But it's worth pointing out that where borrowers are still struggling, the FCA has this week said lenders will need to continue to offer lower interest rates on borrowing above interest-free buffers on overdrafts.

So if you're concerned you'll struggle to pay these high interest rates you should talk to your bank now.

Banks have been forced to offer interest-free overdrafts of at least £500 to existing borrowers throughout the crisis, although some, such as Barclays, have gone above this giving borrowers £750 interest-free.

But as this three-month period is now coming to an end, the FCA has this week warned banks that if customers are unable to meet repayments they can request to extend an up to £500 interest-free buffer for a further three months. 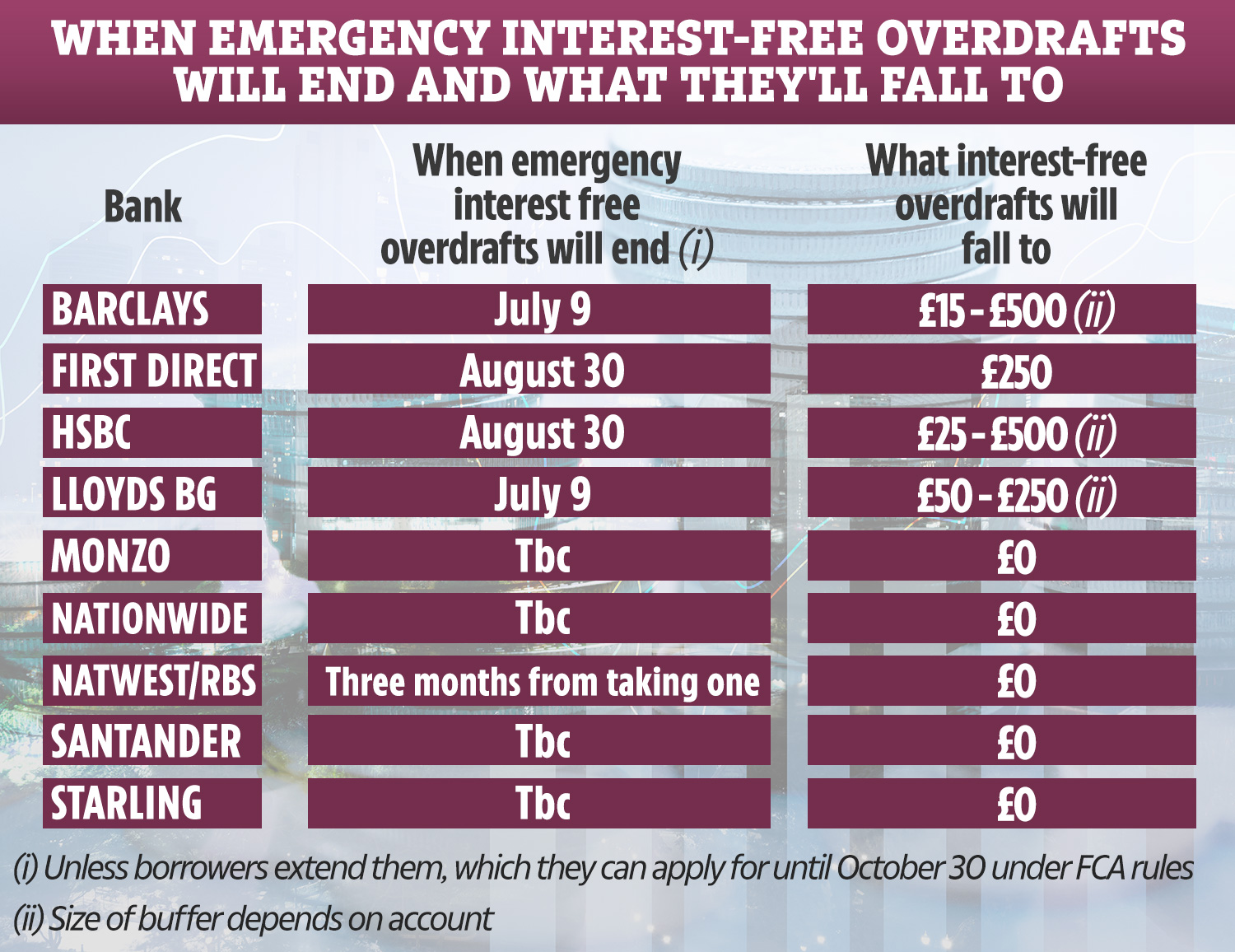 Meanwhile, customers who've yet to apply for an up to £500 interest-free overdraft will see the deadline for this extended until 31 October.

Fail to request a new overdraft or an extension to an existing one and your interest-free period will drop back to its previous level, which is £0 in the cases of Monzo, Nationwide, NatWest, RBS, Santander, and Starling.

How can I pay off my overdraft?

There are a few ways to pay off an overdraft that you may want to consider. Here's what you need to know:

You might be able to pay off the overdraft debt with a credit card that won't charge you interest but will charge you a fee to shift the debt.

These are called 0 per cent money transfer credit cards and they effectively loan you the cash to pay off your overdraft.

You then repay what you owe to the credit card firm on a 0 per cent deal.

How long the interest-free period lasts depends on the provider and your credit history – the best deals are given to those with the top scores.

Use a comparison site and a pre-eligibility checker tool, such as this one from MoneySavingExpert.com to find out the best card you're likely to be accepted for without it damaging your credit score.

You can then choose to clear the debt over 12 months in instalments.

For example, the cheapest personal loan for £1,000 is offered by AIB at a rate of 12.3 per cent – substantially less than the overdraft charges.

You can compare personal loan rates on comparison sites such as GoCompare and MoneySupermarket.

Paying off your overdraft might not be what you'd planned to use your savings for but it might be your best option in the long run.

The rates banks will charge for you going into your overdraft will most likely outweigh any interest you'll earn on your savings.

Another option is that you can try is to start paying off your overdraft now with your monthly paycheque.

This way, the overdrawn balance grows smaller and less expensive when the fees are applied.

If you're still worried about how to pay off your overdraft then you should talk to your bank.

It probably won't change the amount that you owe, but it can refund or temporarily stop charges if it feels that it is necessary.

You will need to give your bank relevant information about your finances for it to be able to make an informed decision.