Being yourself and authentic can get you a long way: Tayla Harris

Tayla Harris is speaking to me on her way to the gym in Brisbane, where she’s attending a conference. It’s the AFLW superstar’s hometown and being back there has prompted some long-forgotten memories. 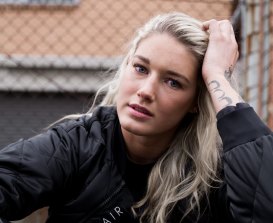 “We drove past the house I grew up in and I had a giggle as I remembered I would run myself into the ground running up and down the hills – Brissie is notoriously hilly. I used to run around until I’d throw up,” she says.

That self-discipline and tenacity is showcased in Kick Like Tayla, the new Prime Video documentary about the 24-year-old’s career thus far. As well as her considerable success on the football field, Harris is a champion boxer and last year won the Australian middleweight and Australian super welterweight titles.

Growing up, she would set herself random goals: doing 500 sit-ups in a day, for example, and not stopping until she’d achieved it. “[It would be] time to go to bed and I’d be on the floor in my room doing exercises for no real reason, just because I’d decided.”

The idea for the documentary came from producer and director Andrew Garrick, not long before the pandemic hit. Initially, Harris was surprised anyone would want to document her life. “I couldn’t believe anyone would care, let alone invest money in showing my world, but the feedback is I am able to influence people in a positive way by showcasing the way I go about things,” she says.

“From all reports, since people have been able to see the doco, it’s powerful and … it showcases that being authentic and being yourself can get you a long way.”

The hour-long documentary gives an insight into Harris’ nature, as well as her personal life, as she trains at home with her wife and fellow AFLW player Sarah Dargan, her teammates, and into her upbringing. Interviewees include various footy coaches, her manager Alex Saundry, her boxing trainer, fellow players such as Daisy Pearce, plus her parents and her wife.

The show’s title references her now famous kick from a game against the Bulldogs in 2019, immortalised by AFL photographer Michael Willson. It’s an extraordinary shot, almost balletic, showing her athleticism and strength, not to mention her extraordinary leg extension.

When the image was posted on social media, Harris was barraged with vitriolic, sexist and threatening comments. Channel Seven took it down from their channels as a result, reinstating it later at Harris’s instigation. The young footballer was incensed by the response and determined to call it out; the campaign she mounted underlined a shocking reality for many women. Such appalling behaviour is well known and not uncommon, an all-pervasive part of public life. 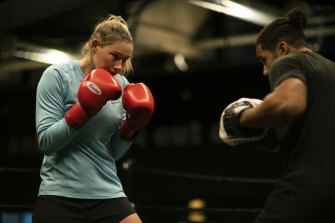 Harris is a boxing champion, as well as an AFLW player.

When women of any field speak out against bad behaviour, it often generates even more of a pile-on, especially on social media. Anonymity emboldens people, which is clearly an inherent issue. “Anything that is polarising and holds people to account – I feel like they act out. Clearly that’s the psychology of these issues,” Harris says. “2019 feels like a lifetime ago, to be honest; I do remember I felt empowered and supported and protected when I spoke, so I didn’t necessarily have fear. I had people around me to support me and have my back.”

As for being a trailblazer, it’s a title that comes with the territory. Harris cites as inspiration women such as AFLW’s Daisy Pearce and pioneer Debbie Lee, who campaigned for a female equivalent of the AFL. “[Lee] is one of the reasons we’re even able to play in a national women’s league. People like that I look to and I believe they are [trailblazers]. Now I realise I have a similar responsibility … I don’t take it lightly.”

“If I was 10 or 20 years younger, I would not have to worry about a lot of the challenges that this batch of players face. But I’m happy for that, knowing that someone who is picking up a footy at five, she won’t have to face these same issues.”

Made by Amazon Prime Video with the AFL and Screentime, the documentary reveals a fragility to Harris unseen by many who know her public persona. The toll of the pandemic and being unable to visit her family in Brisbane, for example, and unfounded media reports that accused her of demanding unreasonable sums of money at Carlton after a bad season are two key moments when she shows her vulnerability. 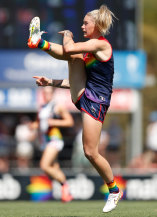 Harris in action on the footy fieldCredit:Getty Images

So, have things changed since that remarkable photograph of her was released? The answer is yes, she says. “Obviously, it takes someone brave to stand up to others, I guess I did that in the first place, and then people big or small, follow suit – not that I’m the reason, but society is advocating for that more than ever,” she says. “The narrative around women’s sport is now more directed towards the actual performance than what I had to deal with.”

She says she is full of admiration for women on the federal stage such as Grace Tame and Brittany Higgins.“The way they go about advocating for what they are passionate about, everyone can take something from that – whether it’s the exact issue or not – but the fact they are willing to put themselves in an uncomfortable and unrelenting place … every time they stand up for themselves and others.“

At the beginning of the documentary, Harris reveals that kindness was key to how she was raised. Where many parents might say “have a great day”, hers would always say “be kind”.

“Being kind to people has got me everywhere in life, being nice to people and giving everyone the time of day,” she says. “On the football field and in the boxing ring, even then, how you treat your training partners and your coach and your opponent, respect and kindness goes a long way to success.”

Kick Like Tayla is on Prime Video on May 27.