Blithe Spirit REVIEW: Jennifer Saunders has what it takes, but the play just isn’t ghostly 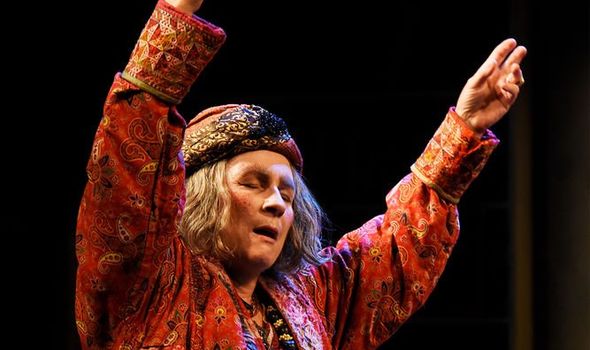 While there are plenty of paranormal plays knock-knock-knocking around whose sole intention is to put the willies up you, Blithe Spirit, as its title suggests, is lighter than air, carefree and diaphanous.

Novelist Charles Condomine (Geoffrey Streatfield) invites medium Madame Arcati (Saunders) to his house for a seance as research for his next book.

Charles is a widower whose second wife, Ruth (Lisa Dillon), is straight-laced and competent.

The seance brings about something unexpected for all — Madame Arcati included — when the ghost of Charles’ impossibly glamorous dead wife Elvira (Madeleine Mantock) appears.

Only Charles can see and talk to her and once summoned, she refuses to depart.

This device allows Coward to indulge in amusing repartee, with people constantly talking at cross purposes – one of the fundamental building blocks of comic dialogue.

The set-up is ripe for revision but Richard Eyre’s production is relentlessly old fashioned.

Streatfield overplays his hand as the put upon novelist and seems to have lost the lightness of touch that made him so good in The Way of the World a few years ago.

Rose Wardlaw’s eager-to-please maid Edith is almost the funniest thing on stage, galloping around until the Exorcist style payoff when Eyre references his own 1980 production of Hamlet in which Jonathan Pryce was possessed by the spirit of his dead father.

But it is Saunders’ show and she proves once again to be a comedic actor of considerable skill.

Almost unrecognisable with untamed eyebrows and mannish voice, her brown skirt decorated with food stains, she presents the fully realised portrait of a robustly eccentric English woman — one half Beryl Reid, one half Mary Beard — whose bluff exterior and mannerisms conceal a girlish heart as she skips around with delight at her rare success in summoning an actual ghost.

Alas, Eyre’s gifts as a director appear to have gone to sleep as aside from the few moments of banal and overplayed illusion (books falling from bookcases, records playing by themselves) there is very little here that is a) ghostly or b) magical.

More worryingly, his sense of comic timing seems to have deserted him; the inclusion of fart jokes cannot compensate for the lumbering speeches and his uninspired orchestration of the characters.

Coward’s cynical attitude towards infidelity among the heterosexual chattering classes pops its head up during dialogues in the second act but Eyre doesn’t have a clue where to go with them in the modern era.

This needn’t have been a museum piece dusted down for the tourist trade. But that’s precisely what it is.