When it premiered in 2015, the Breaking Bad spin-off Better Call Saul got a free pass. The series, which took the crooked strip mall lawyer Saul Goodman and turned back the clock to his earlier life as Jimmy McGill, got "a freedom and a trust from the audience that nobody else can start with", actor Bob Odenkirk says.

"You can't take the time we took, unless you come out of Breaking Bad and everyone goes, 'ee trust you, it's going to go somewhere, it's going to pay off'," he says. "Anyone else who started a show this interior, idiosyncratic, slow, quiet, it would just not last. You couldn't get people to stay. So I think Breaking Bad made it possible for us to be this unique show that's special in all [those] ways." 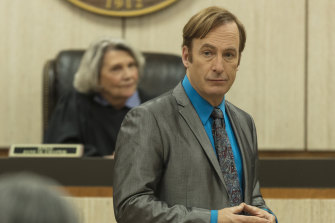 Better Call Saul starring Bob Odenkirk is back for Season 5.

As the series enters its fifth season, it is juggling the challenges of its upcoming sixth and final season, and the mathematical reality that as a prequel set six years prior to the events of the long-running hit Breaking Bad, the two narratives will likely mesh in some fashion at the conclusion of the sixth season in 2021.

The joy for Odenkirk, who will by then have played Jimmy McGill/Saul Goodman for a total of 11 seasons in two shows, has been playing him from the outside in, and in Better Call Saul particularly, getting to know Jimmy as the later persona of Saul slowly begins to coalesce.

"I think there are people like him, and I think they do exhaust the people around them," Odenkirk says. "But over time he's had moments of self-awareness, that's helpful. If the character can look at [his girlfriend] Kim and say, 'I'm sorry, what I did was wrong.' And he's done that a couple times. Just having that self-awareness gives you a place to go. He can see once in a while that he's got to rein in his impulses."

The show's creators, Vince Gilligan and Peter Gould, "gave me all the ammunition for it", Odenkirk adds. "He's really angry at the world. He's angry at his brother for dying, for making him feel bad. He's angry that he wanted his brother's love and respect and now there's no way he can't get it. He's angry at Kim because he can sense that she judges him. And he's trying to funnel that anger somewhere.

It is also true, he adds, that in the larger ensemble of Breaking Bad characters led by chemistry teacher-turned-meth maker Walter White and White's former student-turned-business partner Jesse Pinkman, Saul was a substantially thinner character than Jimmy. "You could say [he was] easier to play [then] because there just aren't as many sides to him," Odenkirk says. "He sees the whole world as a mark, and that's it. And I'm just here to use to you and everybody I see, and that's the end all.

"I guess the only thing that would be complicated is if you were to see Saul go home in Breaking Bad and whatever that life is. I don't know what his life is, as a person, alone. When I did Breaking Bad, I figured he just went to strip clubs and got hammered and that was it. Maybe that's what he does."

In January the series was renewed for a sixth season which will air in 2021. That season will be the show's last, which means although Odenkirk has played the two halves of Jimmy/Saul's life in reverse, he will for the second time in his career have to bid farewell to the character. 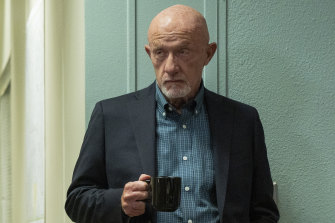 "I want him to grow into a really good person. I don't know if they'll do that, but it would be neat to me if it was kind of the opposite of Walter White's journey of degradation [in Breaking Bad]. And then it'd be neat if he learnt the right lessons from all of his bad choices and trouble and trauma. I'm not sure that that can happen, but I'd love to see it, because I like the guy."

The most complex components of the character, he says, are his relationships, particularly with his brother Chuck McGill (Michael McKean), and more recently with his girlfriend Kim Wexler (Rhea Seehorn). Kim's perseverance, in particular, has always intrigued Odenkirk. 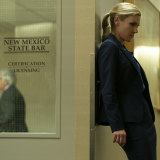 What is to become of Jimmy’s girlfriend Kim Wexler (Rhea Seehorn) has yet to be seen, but Odenkirk has a theory.

"Why is Kim OK with him in an overall way? And she kind of is," Odenkirk says. "I don't think I'm giving you a spoiler, because I don't know. But I just think that she, in her past, had somebody like him. That's my gut, that she's not complete. She gets who he is, and that's from something before we ever saw her or met her. Or maybe before she ever met Jimmy, somebody else in her life was like that. Or people were like that. And she goes, 'I know who this person is, I can deal with this.' That's my theory."

"But if they were to split up, and again, I am speaking as a fan, I am not telling you anything that happens, it would be all the more reason [for him] to have a big billboard that she has to drive by every day. And he knows, she's looking at me every day. She rejected me. She has to see me and how I have to debase myself to succeed. And she knows I did this for the right reasons. I did this because I was hurt. And it's what people want me to be. So I gave it to them."

Better Call Saul is on Stan, which is owned by this masthead.