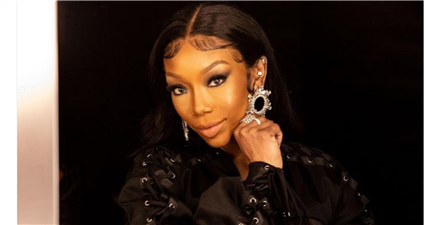 Brandy Norwood is being taken to court over a $45,000 ring that allegedly went missing. The 42-year-old singer is supposed to wear the ring at the American Music Awards last November 2021 which she borrowed from the Beverly Hills studio owner Elle B. Mambetov. Brandy together with her stylist, Ashley Sean Thomas, are now being sued by Mambetov for the missing ring.

Mambetov claims that Brandy’s stylist, Thomas, had approached them about borrowing a jewelry and some clothes for the singer to wear at the award gala. Mambetov gladly obliged to let them borrow the requested items according to the legal documents that was obtained by TMZ last week. It was alleged that apparently the two failed to return the Dreamboule Big Bang Love Black Ring which currently priced at $44,200 listed on the designer’s website.

RELATED: Alec Baldwin Sued For Unsafe Work Conditions After A Fatal Shooting Accident On The Sets Of ‘Rust’

The alleged accessory that went missing is an 18k rose gold that is polished with white diamonds and features a sapphire crystal dome and stunning contrast that was embedded in a form of a black volcanic stone. The lawsuit filed by the Beverly Hills studio owner claims that Thomas told her that the jewelry which went missing was last seen at the piano that was located at Brandy’s mansion in Calabasas. Brandy was not able to wear the ring because it went missing before she even got the opportunity to wear them. The Boy is Mine singer presented an award for Favorite Pop Album wherein Taylor Swift ended up winning.

Brandy’s stylist is usually the one who puts together numerous outfits and jewelry combination for such high-profile events which is not at all uncommon for them to borrow pieces from different brands for their artist to wear. Mambetov is now suing Brandy as well as Thomas for the exact value of the ring plus some damages that she claims she suffered some emotional trauma resulting to some financial losses.

A representative for Thomas has given TMZ a statement claiming that the allegations of the Beverly Hills studio owner is not at all true and he is looking forward to presenting facts and proofs to refute the allegations at the proper forum. Brandy’s representative also gave a statement to TMZ where she denies any involvement with the issue and they are claiming that Brandy never saw the ring and did not even have any knowledge of the supposed missing ring being in her presence. The ring was never intended to be a part of her look for the event.

READ NEXT: Former McDonald’s CEO Steve Easterbrook Ordered To Repay $105 Million After Being Sued By The Fast Food Chain