Parker McCollum is not a bad guy, but you wouldn’t know that from listening to the lyrics in his music.

His number-one single, “Pretty Heart,” tells about how he broke an angel’s wings — and her pretty heart — a theme he revisits in his latest release, “To Be Loved By You,” in which he acknowledges he’s a “little bit harder to love than the rest.”

McCollum, a strapping 6-foot, 3-inch Texan who grew up outside Houston and now lives in Austin, admits that while he may have been a heartbreaker in the past, he’s matured a lot in the past few years.

But it still impacts his music.

“I think I really enjoy writing songs from that perspective,” he says. “And I’m sure I’m overdoing it at this point and need to find something else to write about, but I’m always trying to perfect that and I’m waiting for the perfect song to explain that emotion. So as long as it’s working, I’ll probably still do it.”

After a successful independent career playing clubs in his home state, McCollum blasted onto the national scene last year after signing a record deal with MCA Nashville. “Pretty Heart” became his first number-one single, was certified gold, averaged almost 7 million streams a week and remained in the top 10 of country streaming charts for weeks. His EP, “Hollywood Gold,” debuted in the top 10 of the Billboard country charts and was the highest-selling country EP in 2020.

All of the Fashion at the 2021 BAFTA Awards 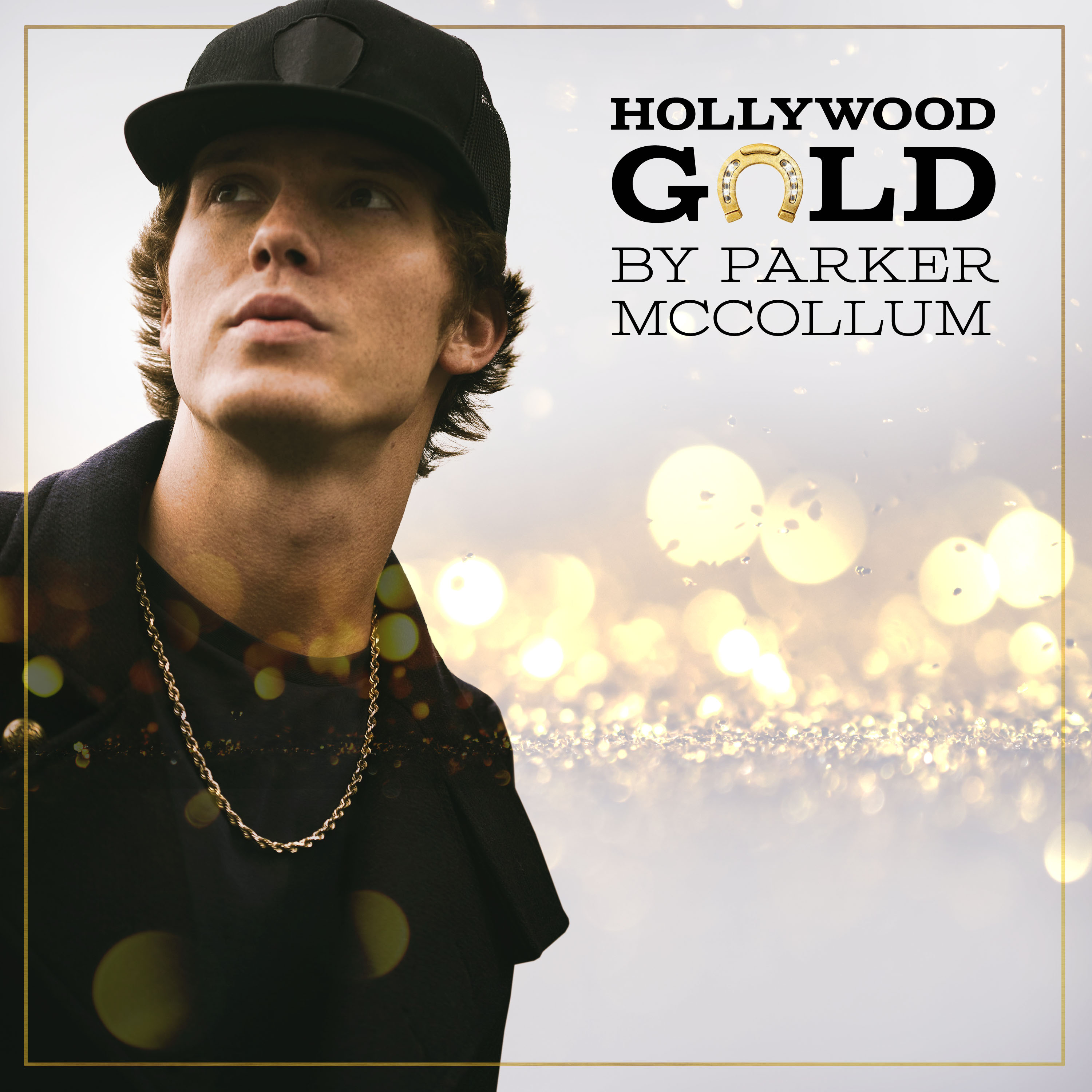 The new single, which he co-wrote with Rhett Akins, was the most added song on country radio upon its debut. He’s played to a national audience on the “Today” show and was nominated for New Male Artist of the Year by the Academy of Country Music, whose awards show airs on Sunday night.

But despite his success, McCollum says things haven’t really changed that much for him. “It seems like we sell a lot of tickets a lot further away from the local scene than we did before,” he says. “That’s the biggest difference.”

Even so, he’s humbled by his newfound status. Although he learned last week that he had lost the ACM newcomer award to Jimmie Allen, he was gracious in defeat. “He and I have never met — we’ve talked a bit on social media, but he seems like just a normal, cool guy. And so deserving of that award.”

Instead, McCollum is laser-focused on continuing to advance his career, put the finishing touches on his next album and returning to live performances.

“It was 365 days exactly from our last normal show to our first normal show this year,” he says. “I’ve been doing a couple of shows here and there to the places that will let us play. I can’t explain how good it is to get up there [on stage] and feel that again.” 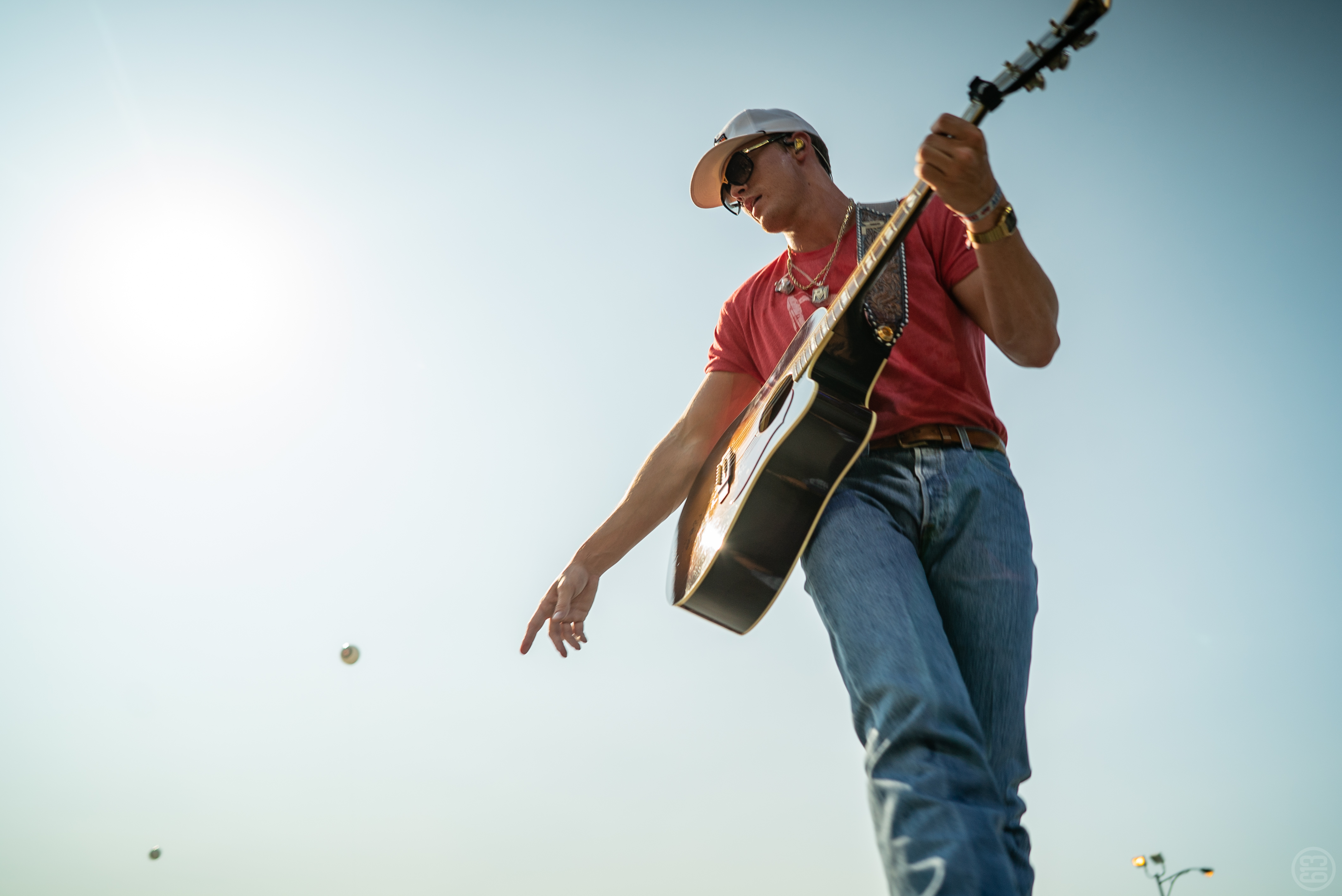 Parker McCollum has returned to the stage.

During the pandemic, he split his time between his homes in Nashville and Austin and his family’s ranch in Texas, working on his songwriting skills and connecting with fans virtually.

“It’s a great feeling to work hard and see it pay off, no matter how that may show its face. I’m just really grateful that anything is happening at all, especially with being at home all the time,” he says.

McCollum has an entire album ready to be released, and while it’s still being discussed when that material will drop and whether it’ll be another EP or a full-length album, it will definitely include the popular new single.

It’s a pretty safe bet, too, that McCollum’s new album will showcase the range of artists that have helped hone his style, which has been described as a mix of country and Americana. He cites everyone from Dwight Yoakam and Steve Earle to Buck Owens, Porter Wagoner, Ryan Adams and John Mayer as influences. “And I’ve been a massive George Strait fan my entire life. You put all that in a blender and maybe something cool comes out,” he says.

Although he does enjoy being on stage, he’s perhaps more connected to songwriting. With that, he follows in the footsteps of his older brother Tyler who he describes as “a super talented songwriter. He’s the reason I know songwriting at all. He could have been an ice skater — I just wanted to do what big brother was doing. But luckily he was a songwriter. He’s writing his own album now and putting out his second full length in a couple of months.”

If it hadn’t been for his brother showing him the way, McCollum might have chosen a different career path. “My mom’s side of the family had a concrete business and my dad’s side of the family has been in the car business their whole lives, so I’m sure I would have ended up working for one of those. I come from the hardest-working, most wonderful blue-collar people you could ever want to see. Either way, I’d be super busy.” 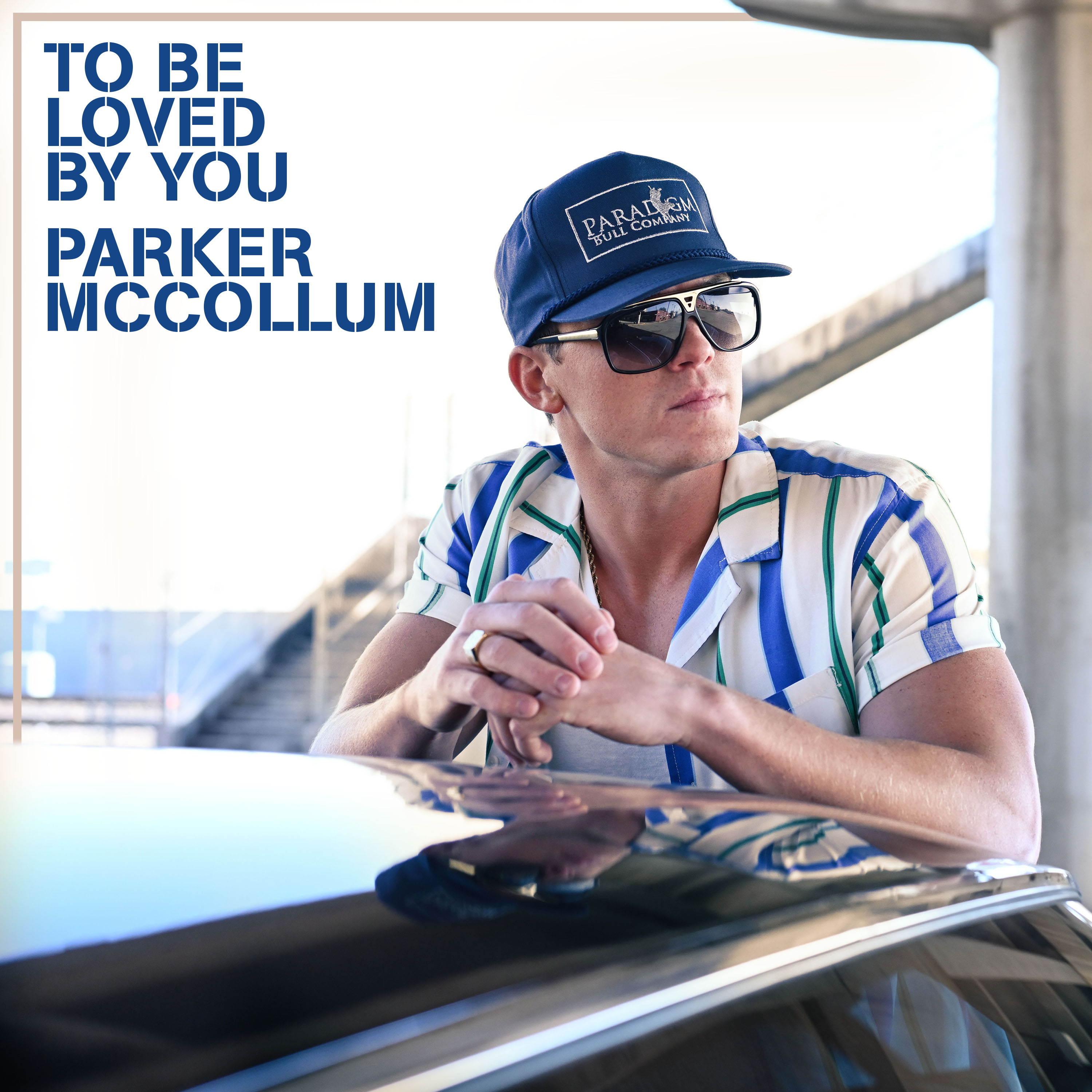 He sports Louis Vuitton sunglasses and a striped short-sleeve shirt in his new music video.

That work ethic shows in the way McCollum has made his mark in the music industry and his goals for the future, which include a bucket list desire to play the Houston Rodeo before he turns 30. “COVID-19 put a halt to that so we’ve only got one more chance to meet that goal,” he says with a smile. “But I really would like to get to a point where I’m headlining an arena tour and still singing songs that I’m writing. I think that’s the whole goal in a nutshell. You want to be on the top. I’m not sure why you’d do it if you don’t. I’m very competitive and I constantly compete with myself to see how far can I really take it. That kind of keeps me going.”

What also keeps him going is his relationship with his girlfriend, Hallie Ray Light, who took a little work to snag. “I heard her name and decided that name had to go in a song and that was before I ever knew who she was,” he relates. The song wound up on “Hollywood Gold” and eventually he met the young lady who inspired it and after several fits and starts, finally lured her to a show and into his arms. Despite the fact that the song, not surprisingly, talks about him leaving — “She didn’t really like that part,” he says — she’s still his girlfriend today.

When the pandemic finally wanes and the music scene returns to normal, McCollum will undoubtedly have Hallie Ray Light on his arm on red carpets and industry events. Although he has worked with stylist Katy Robbins in the past, he pretty much sticks to the same wardrobe he’s always worn. 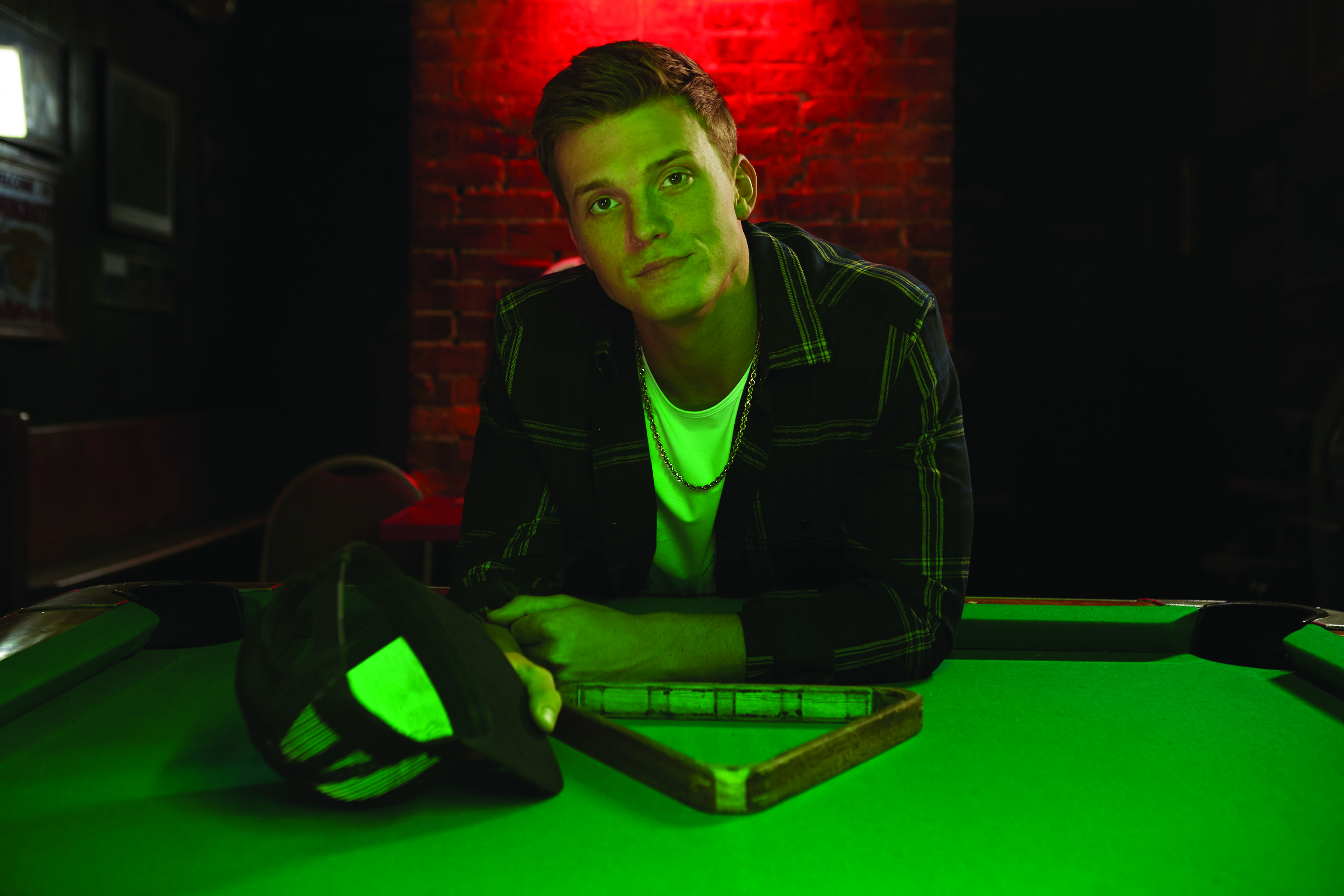 Parker McCollum will release a new album later this year.

“I wear the same two things every day: all the starch the dry cleaner has to offer in my jeans, and then probably a T-shirt. If not that, I’m wearing slides, socks and sweats to go to the gym.” He also sports a gold chain and is partial to squared-off aviator Louis Vuitton sunglasses and a gold Louis Vuitton ring. Robbins says the Wranglers and Cuts T-shirts are his go-to choices. “I just like to set the brand and make it really simple so I don’t have to think about it,” he says.