‘Buyer beware’: Prime Minister says there is no case to ban TikTok

The Australian government is still looking at ways to manage privacy and security risks posed by social media companies such as TikTok and WeChat, but has decided any kind of ban or country-wide restrictions on the applications are not warranted on national security grounds. 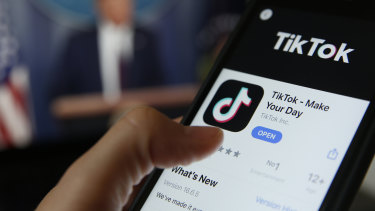 The Australian government will not ban TikTok.Credit:Bloomberg

Prime Minister Scott Morrison said on Wednesday morning the Australian government had had a "good look" at whether to ban apps such as TikTok and concluded there was "no reason for us to restrict those applications at this point".

But he warned there were still risks that personal data could be sent back to Beijing.

"Australians have to be very aware, and it's not just with TikTok and things like that," Mr Morrison said.

Microsoft is in discussions to buy Tiktok in the United States – and possibly its operations in Australia, Canada and New Zealand – after US President Donald Trump gave Chinese company ByteDance 45 days to sell TikTok or face being banned.

The Sydney Morning Herald and The Age revealed last month that Australian Prime Minister Scott Morrison had ordered an investigation into the potential security threats posed by TikTok, as well as platforms used primarily by the Chinese diaspora such as WeChat.

The probe was ordered after India has already banned the social media platform and some Liberal MPs had been raising concern about the way in which TikTok collected users' data and whether the Chinese company will be required to share users' information with the Chinese government.

The Australian government will continue to look at ways to manage the privacy concerns posed by social media companies such as TikTok. The Australian Defence Force has already banned the use of TikTok on its devices, and other Commonwealth departments could follow.

"Now, it is true that with applications like TikTok, that data, that information, can be accessed at a sovereign state level. That is not the case in relation to the applications that are coming into the United States. But I think people should understand and there's a sort of a buyer beware process," Mr Morrison told the Aspen Security Forum via a video call on Wednesday morning.

"But people should know that the line connects right back to China and that they should exercise their own judgement about whether they should participate in those things or not," he said.

"There is a greater level of transparency, I would argue, about how applications like WhatsApp and things like that, you know, if you go on one of those, how data is used and managed, that's pretty upfront, relatively speaking compared to TikTok and things like that."

Mr Morrison said the government would "keep watching" the social media apps, but it was up to Australians to understand the "where the extension cord goes back to".

TikTok is the first Chinese tech giant to have a truly international user base.

The company is owned by ByteDance, which runs a separate China-only version called Douyin, that regularly censors content in accordance with regulations enforced by the Chinese Communist Party.

The Committee on Foreign Investment in the United States is investigating if the millions of videos uploaded to TikTok daily could give the Chinese government access to a vast facial recognition database.