Call human resources. Is the office getting the sack?

John Clarke once told Gideon Haigh that his previous book about the office should have an office to read it in. For many of us, The Office: A Hardworking History, an encyclopaedic and panoramic work, sat reproachfully in our own, insufficiently assimilated. 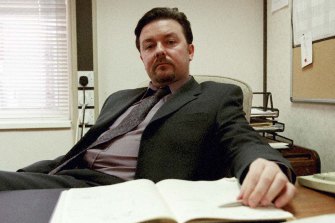 Ricky Gervais’ take on the office is central to Gideon Haigh’s meditation on its condition.Credit:

Now Haigh has written a sprightly, densely ambivalent essay about the idea of the office in the light of COVID-induced lockdowns that allowed everyone the chance to see how they could cope when office life seemed to go on perfectly efficiently – even when many people were going about their business at home in tracksuit pants rather than dressed to kill or congregate.

Many of us, not least Haigh, journalist and author of 40 books, have looked at the office from both sides now. Haigh evokes with robust appropriateness Banjo Paterson’s Clancy of the Overflow and Herman Melville’s extraordinary short story about an office worker, Bartleby, the Scrivener, about the man “who would prefer not to”, though not its great Russian parallel, Gogol’s The Overcoat. Poor Bartleby lives in the domain of dead letters and it’s debatable whether the existential extremity of his position is ideally suited to Haigh’s delineation of the office as a site we can neither live with nor live without.

The first movement of his essay – after he has surveyed Dickens’ Wemmick and Jaggers, the reticences and cruelties – makes a meal of that whimsical figure Charles Lamb, who spent most of his life moaning about the pent-up quality of office life, but ended up saying: “Devil take me if I did not feel some remorse at quitting the prisonhouse.” 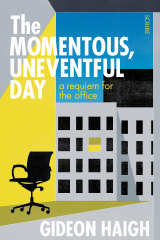 And Lucy Kellaway, late of The Financial Times and a supreme critic of management, said after she quit one job that “office workers everywhere should stand in the street and weep at what they are losing”. She fears her children will never know the happiness of office life.

This is an iridescent book. Haigh describes Ricky Gervais’ The Office as endlessly re-watchable though he fears that human resources (a variety of office life he detests) would have moved against David Brent’s more life-denying excesses. The Gervais take on the office, so harrowingly real in its bleakness and such a joy forever in its hilarity, is close to the centre of Haigh’s meditation. He loves John Brack’s 1955 masterpiece Collins St, 5pm, but thinks of the painting as cheerier in tone than the desolate buttoned-up faces might suggest because of the implicit hilarity that must soon break out.

He’s analytically impressive and informative in detailing how the verticality of skyscraper offices was historically related to the circumscribed nature of Chicago with its lakes and railways and the fact that Manhattan was an island. And he is dire and measured about capitalism’s underlying belief that every individual should be instantly and infinitely replaceable.

Haigh is alive not only to the way the click of the typewriter – that dynamised sewing machine – exploited women but he has an appreciation of Betty Friedan’s critique and of that all but forgotten figure, Helen Gurley Brown, who said she had “never worked anywhere without being sexually involved with someone in the office”. 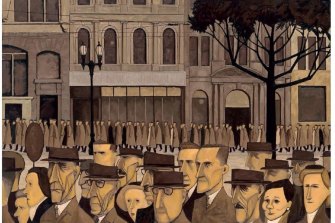 He is also aware of the panoptical supervisory repression of the open-plan office and the way in which Robert Propst (whom he calls the Robert Oppenheimer of office atomisers) created a monster at odds with his own benign intentions.

He knows the brutal inhumanity with which business responded to the OPEC energy crisis of the early ’70s and its influence on Ross Perot’s “outsourcing” and the way in which a leaner, nastier capitalism – depressingly attuned to the despicable chimera of “shareholder values” – exploited the new technology to destabilise the office and disperse with human beings.

Haigh says baldly and unforgettably, “the ultimate solution to the ‘problem’ of the office … was its disappearance”. And this did, by the mid-1990s, reach a point of technical feasibility.

No one is a better guide to the paradoxes of the working at home / being at work pivot. Haigh treasures the irreplaceable camaraderie of his fellow workers even though he knows what it is like to experience the dead “viscous” stillness of 3pm, the contribution to the birthday card of an unlikeable colleague. He also reminds us that at Number 10 Downing Street or the White House the workplace is also the home.

He has a sense of the terrible unambiguous poignancy of the persona that working with peers gives any human being. He writes of these matters as they should be written about, with a full sense of their history and the panache of the literature and art they have inspired.

The Momentous, Uneventful Day: A Requiem for the Office, Gideon Haigh
Scribe, $24.99

A weekly read for book lovers from Jason Steger. Sign up now.