‘How could anyone do this?’ Cat that survived an ACID ATTACK moves viewers to tears as its owner describes her pet’s long road to recovery on Loose Women

A cat left fighting for its life after being doused in acid left Loose Women viewers in tears on Friday.

In April, Georgie, a 10-year-old tabby, was left with horrific burns when she was targeted by an unknown attacker. The injured cat managed to make its way back home to its owner, Lyn Prewer, 24 hours after disappearing from the family home.

Miraculously Georgie survived, and is recovering after undergoing multiple operations including skin grafts to repair her injuries.

Discussing the cat’s recovery on the show on Friday, Lyn, from Exeter in Devon, said despite what she’s been through her pet is back to her old self – and even chasing mice.

Appalled viewers took to Twitter to express their shock at the attack on the helpless animal, with many posting string of crying emojis, and one incredulous animal lover writing: ‘How could anyone do this?’ 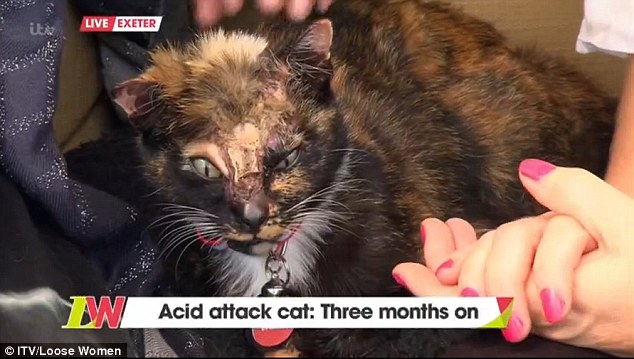 Georgie, a 10-year-old tabby, was doused in acid and left with horrific burns in April (pictured on Loose Women today)

The cat appeared on Loose Women on Friday, snuggled on the sofa with Lyn and presenter Chizzy Akudolu, with its scars and missing patches of fur visible.

Georgie had been missing for 24 hours before staggering home covered in burns.

Lyn said: ‘We were just about to send a search party for her when we saw a silhouette at the front door. We opened it up and that’s when she was sat there looking rather sorry for herself. ‘

When they got the cat inside Lyn wrapped Georgie in a towel and rushed her straight to the vet. 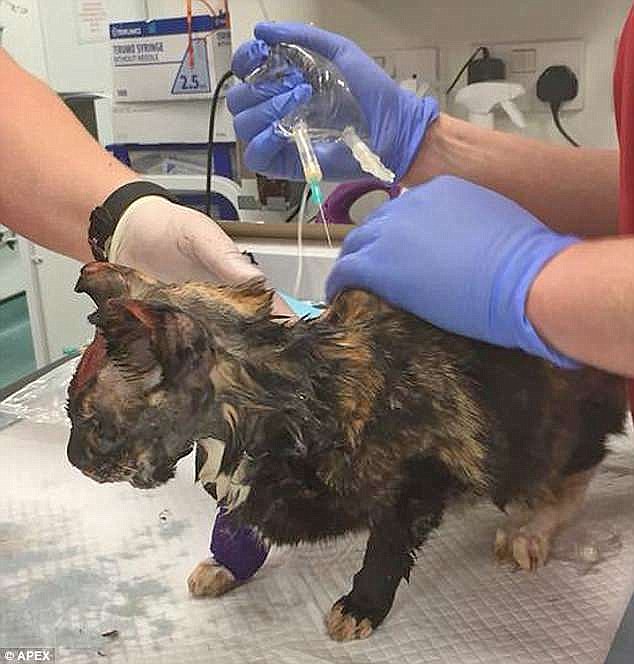 The cat miraculously staggered home to her owners, in Exeter, Devon, with ‘no fur’ (pictured) 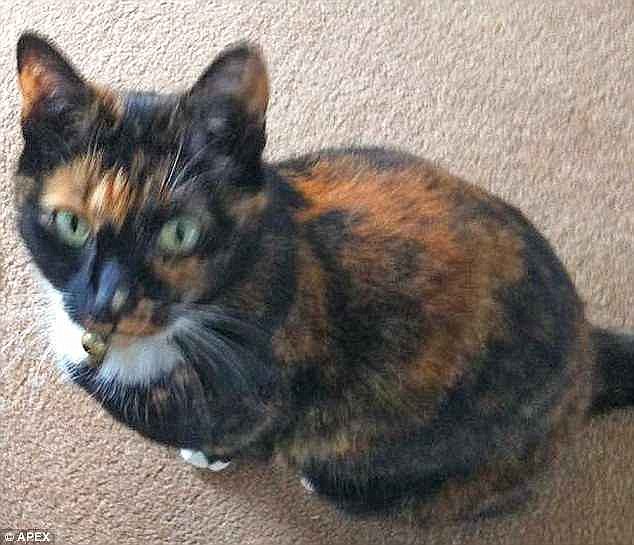 Miraculously the cat has survived and has had multiple operations including skin grafts to repair her injuries (pictured: Georgie before the attack)

Lyn and her family still don’t know who attacked their cat or why anyone would want to.

She continued: ‘It’s still a question I can’t answer really. At the time we were asking why on earth, who on earth would do this? I still can’t answer that question and it’s just beyond me.

‘She’s just an innocent cat going about her day-to-day business, and obviously someone’s taken a dislike to her and hurt her in the most horrific way. I really don’t know.’

Georgie, who was awarded a National Cat Award for bravery, is slowly going back to her old self again.

The segment left Loose Women viewers in tears, with many asking: ‘How could anyone do this?’

The segment left Loose Women viewers in tears, with many wondering who could do such a thing to an innocent pet.

One tweeted: ‘That poor wee cat. There really are some utter scumbags out there. Glad to see she’s doing so well.’ 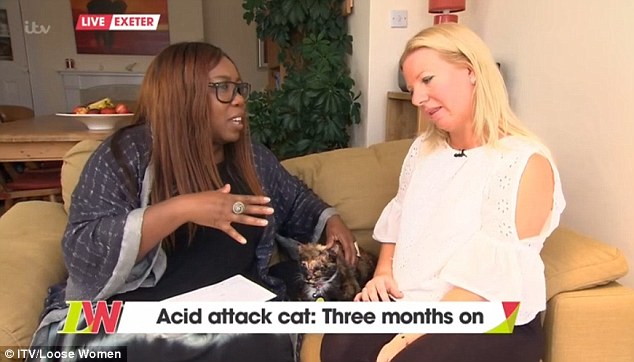 Her own Lyn Prewer, from Exeter, Devon, said Georgie is back to her old self and chasing mice (pictured on the show with George and presenter Chizzy Akudolu) 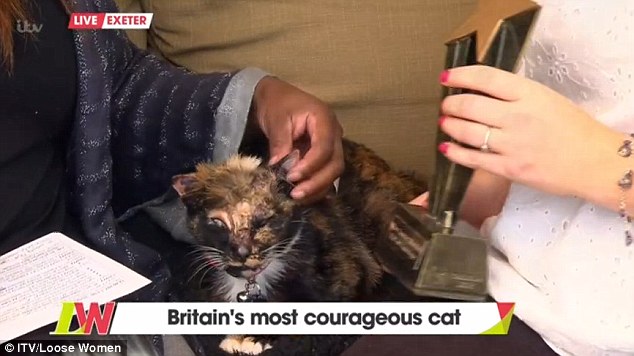 Another posted: ‘Awwwwwwwwwww how could anyone throw acid on a cat or any other animal. You can tell a person’s traits if they are cruel to animals they will be cruel to people for sure.’

‘What an inspiration that cat is,’ a third said.

Another wrote: ‘How can anyone do that to that poor cat!? Makes me angry!’