HALLOWEEN won’t be quite the same this year, but that doesn’t mean you can’t still dress up and get spooky.

To help you get your ghoul on, we’ve rounded up the cheapest costumes currently available for kids with prices starting from £4.99. 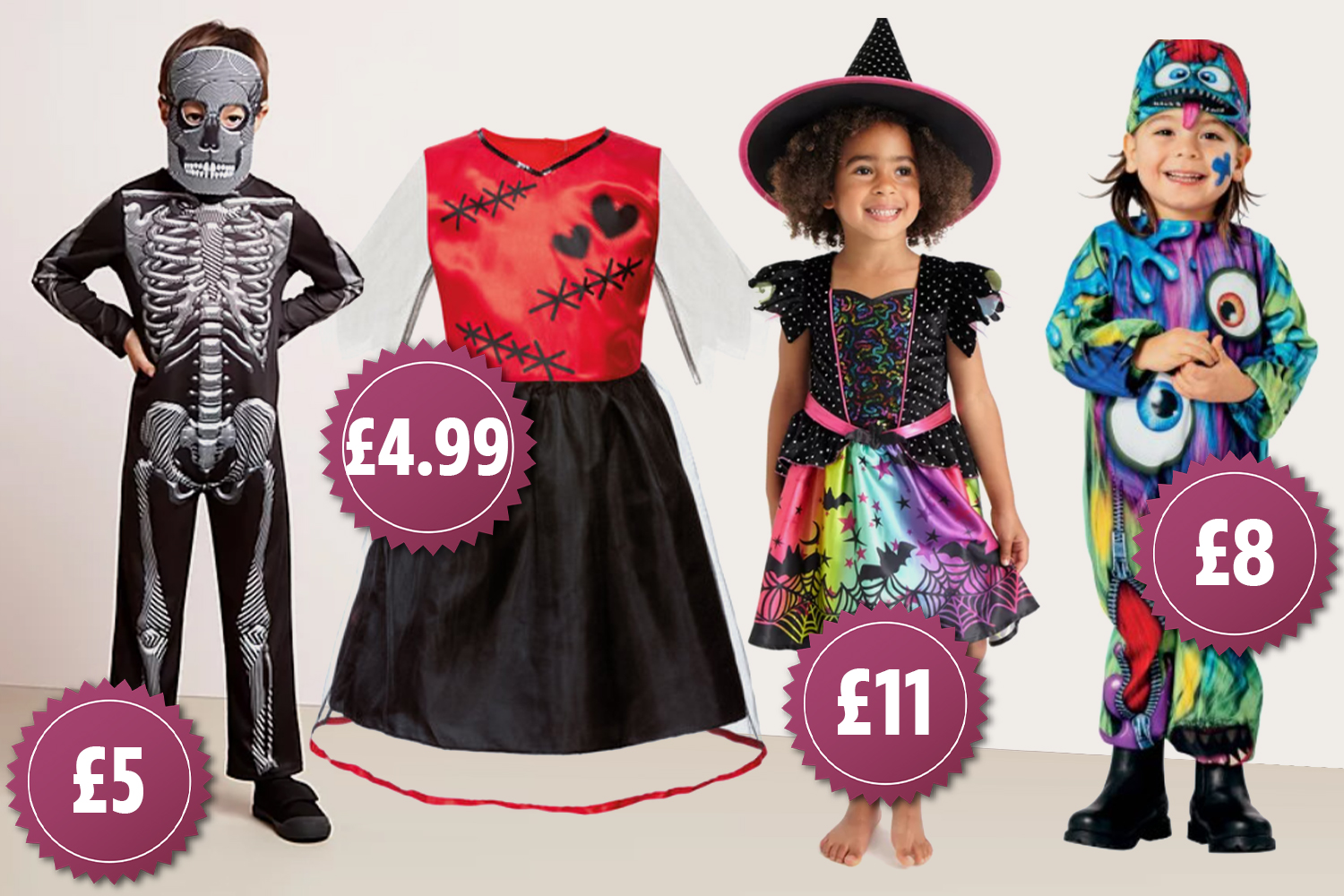 We've searched online at shops including B&M and Matalan, as well as the major supermarkets.

This year, you'll want to keep an eye on Halloween trick or treat rules in your area as the annual event is being banned in places under lockdown.

This is because interacting with neighbours and friends still counts as mixing – which is against the rules in most places under local restrictions.

And outside of lockdown areas, people will still have to stick by the rule of six, which applies nationwide.

But if you still plan on celebrating at home, here are the cheapest Halloween costumes. 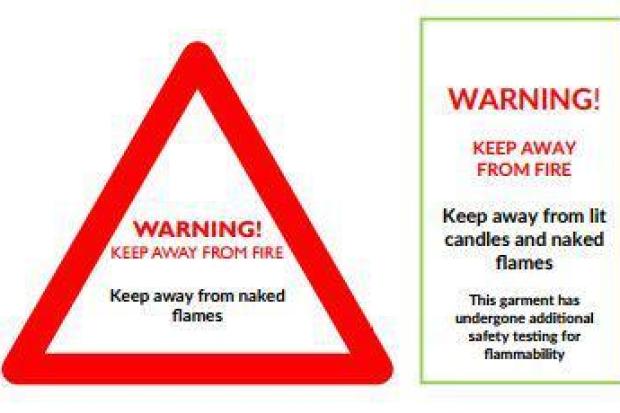 A QUIRK in EU safety regulations means children’s costumes are classed as toys, rather than clothing.

This means they are not subject to the strict flammability standards that regular nightwear or clothing is.

But now flammability measures have been adopted by thousands of retailers after concerns over how quickly a costume can take to ignite.

These robust rules now guarantee costumes will have a maximum burn rate of 10mm per minute, rather than the previous 30mm per minute standard.

It follows campaigns to change the safety rules of fancy dress wear, and after TV presenter Claudia Winkleman's daughter's Halloween outfit went up "like a fireball".

The measures have been introduced as part of a voluntary code of practice for members of the British Retail Consortium.

However, when The Sun investigated last year, we found some kids Halloween costumes still only took three seconds to set alight. 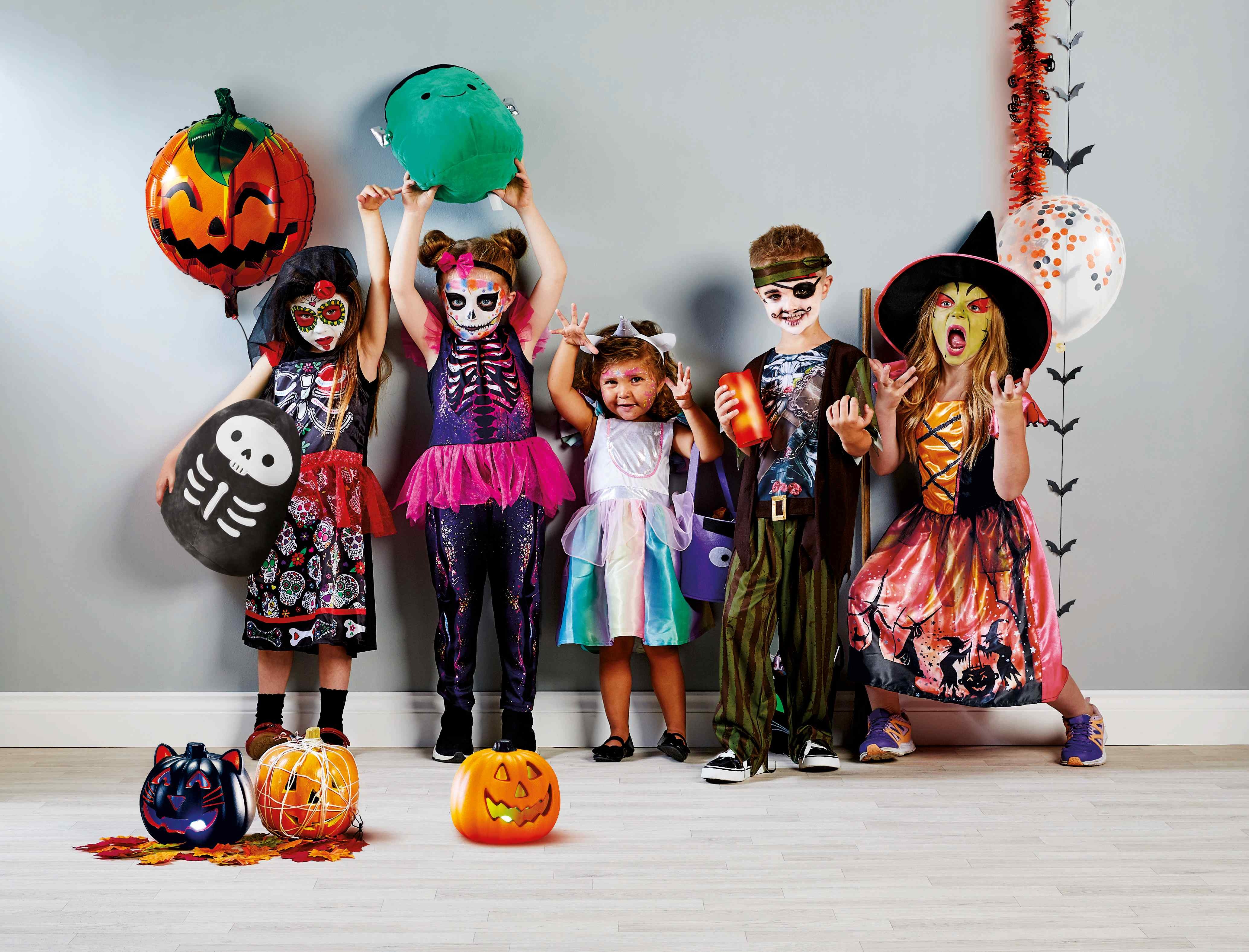 We love the Day of the Dead outfit (first left) which features colourful sugar skulls on the skirt and a red tutu.

Sizes are from age three to ten, and all outfits will only be available to buy online – you won't find them in stores.

Keep an eye on the Aldi website for when they go on sale. Aldi charges £2.95 for standard delivery or it's free above this amount.

Other Aldi outfits include: 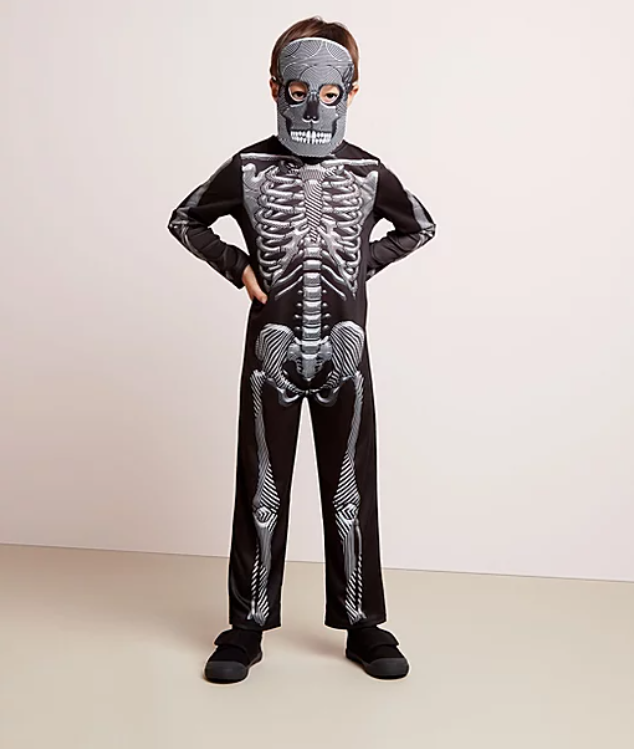 This skeleton costume from Asda features an all-in-one, long-sleeve outfit with a printed design, plus a skull mask. It comes in age sizes one to 14.

Delivery from Asda starts at £2.95 or you can click and collect from your nearest store for free.

Other Asda outfits include: 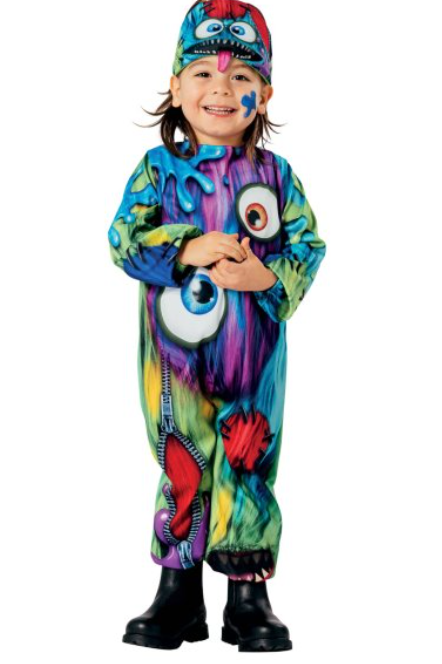 Let your little one turn into a slime monster with this colourful costume from B&M.

This particular outfit is available in age sizes one to four.

Sadly, B&M doesn't offer delivery so you'll need to visit your nearest store to buy from its Halloween range.

Other B&M outfits include: 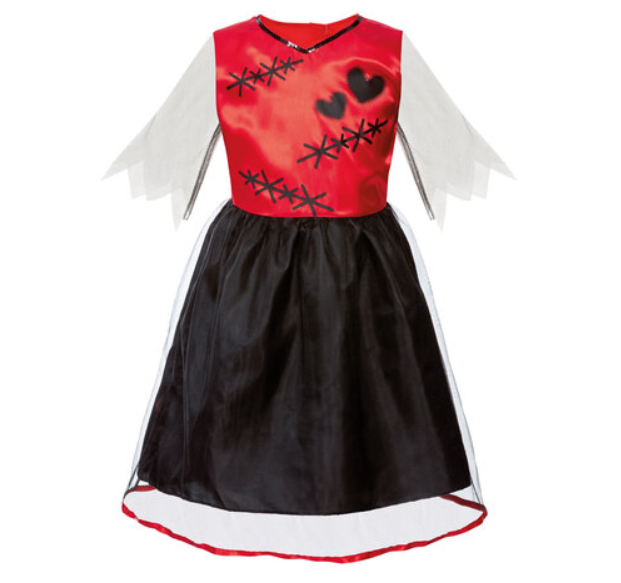 We like the torn sleeves on this devil dress outfit from Lidl, and the heart stitches design on the torso adds a spooky feel.

Lidl's Halloween range covers ages four to ten, but its outfits are only available in stores.

Other Lidl outfits include: 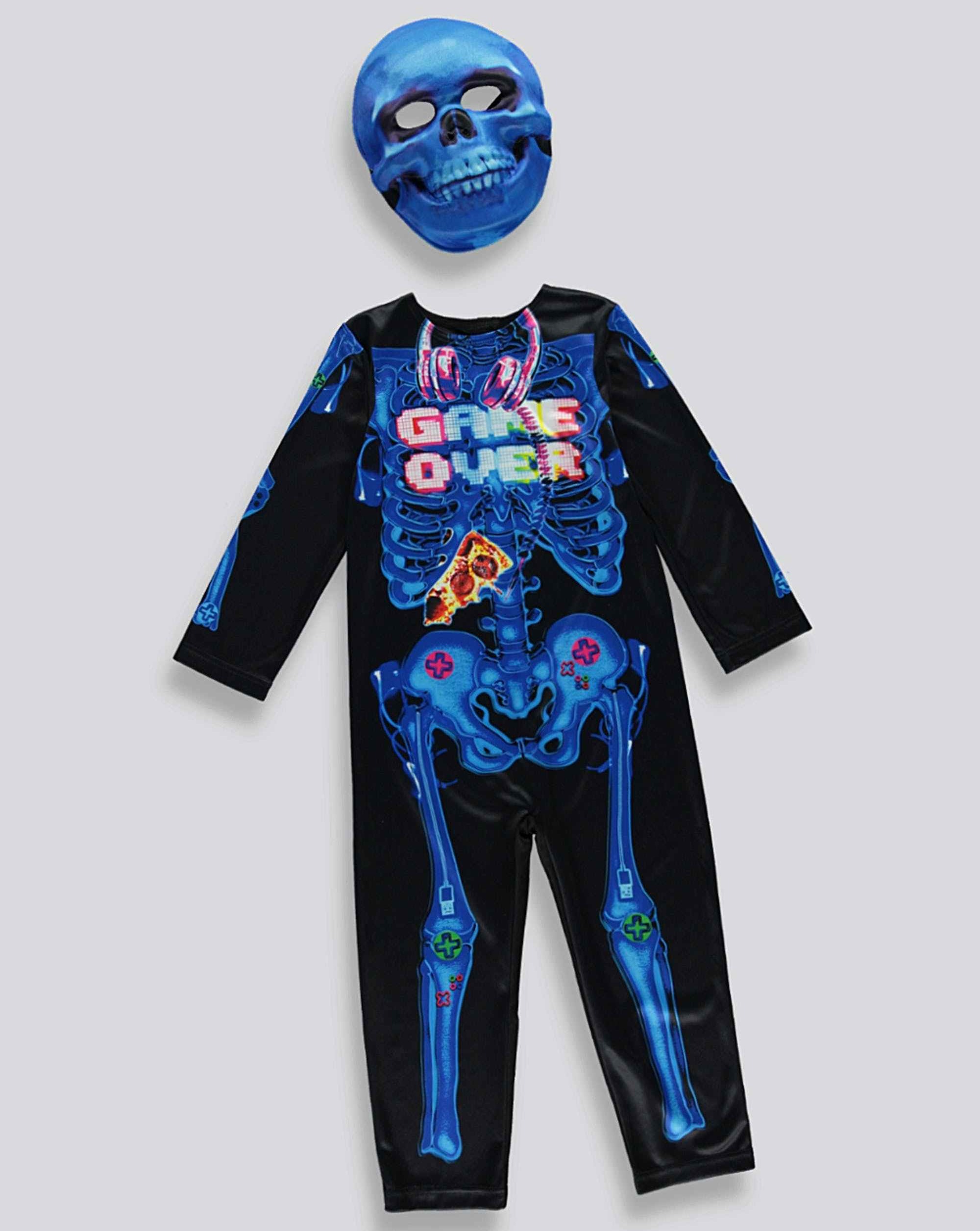 If your kid is a gamer, they're sure to love this skeleton costume. As well as featuring the words 'Game Over' on the torso, the hips and knees have been designed to look like controllers.

Matalan sells this outfit in age sizes four to nine, although the price goes up to £10 from age six and above.

If you're buying online, Matalan charges £3.95 for delivery, or free on orders over £50. Click and collect is free.

Other Matalan outfits include: 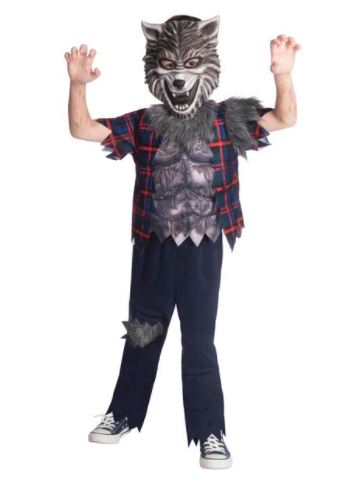 Shoppers get the outfit and spooky werewolf mask with this Morrisons outfit. You can even see the werewolf's fur poking through the ripped jeans at the knees.

This outfit is only available in size 11 to 12.

Morrisons has a £40 minimum spend on home deliveries, with slots available from 99p.

The supermarket only has one other costume listed online, so they might release more as Halloween gets nearer. 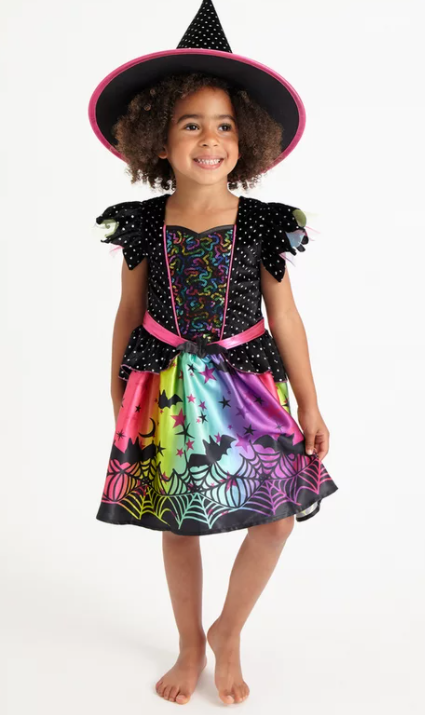 This rainbow witch outfit from Sainsbury's features a colourful skirt with a spiderweb and bat design. You also get a witch hat to go with it.

It comes in sizes ranging from 6 months to four years.

Sainsbury's has a minimum spend of £40 for online orders, with delivery slots starting from £1.

Other Sainsbury's outfits include: 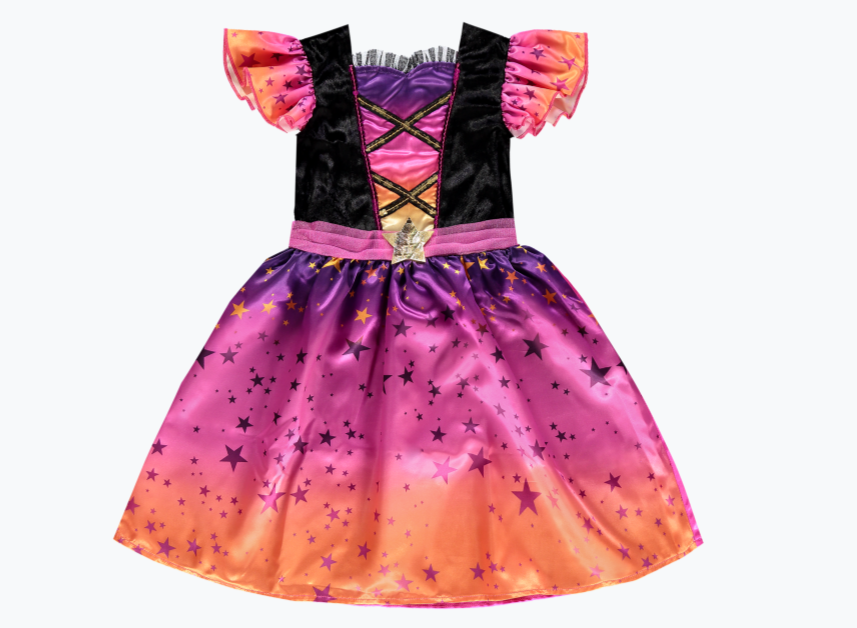 Cast a spell in this brightly coloured purple, pink and orange witches dress with a glittery star belt. It's available in ages one to 14.

We can't see Tesco's Halloween range available to buy online yet, so you might be better trying your luck in stores.

If they do become available online, Tesco charges a fixed fee of  £4.50 for all its delivery slots

Other Tesco outfits include:

You might want to keep an eye on Halloween costume prices after October 31 – parents picked up outfits from 70p last year.

We explain if Halloween will be cancelled and what are the trick or treating rules.

This Halloween-mad woman decorates her home with £200 a month on spooky decorations – and she keeps them up all year round.