After ‘poppin’ off with his hit record, rapper Jack Harlow has dropped a new studio album, featuring a track with his new ‘best friend,’ Chris Brown!

Jack Harlow has closed out 2020, a banner year for him professionally, with a bang. The 22-year-old rapper from Louisville, Kentucky, blew up with his viral hit, “Whats Poppin,” and on Dec. 11, he dropped his first studio album, Thats What They All Say. It features plenty of appearances from friends and fellow rappers like Lil Baby, Big Sean, Bryson Tiller, Static Major, and Jack’s new “best friend,” Chris Brown. Actually, Chris, 31, joined Jack on the track, “Already Best Friends,” and in addition to being a sly Step Brothers reference, it has an even more adult message than the R-rated comedy.

Jack and Breezy sing about how they cross paths with two newly-formed best friends, which of course leads to a ménage à trois situation. “Two at a time, laying in my bed / One on top and the other give me head / Girl oh girl I love the taste,” Breezy sings with his usual smoothness. Despite the X-rated lyrics, the track is really a touching ode to friendship. After Jack asks the fictional best friends where their “mans” are at, he sings, “She said ‘What’s that?’ and they smiled at each other and they both laughed / I don’t need a man, she my other half / We got something not a lot of others have / And I feel like I knew her from the past.” A threesome with a beautiful backstory!

Jack Harlow (born Jackman Thomas Harlow) has been involved in hip-hop since he was 12, per Cool Accidents. He was part of the creative collective, Private Garden, along with members Lucci, 2fo, Shloob, and Ace Pro. “I was writing little raps here and there, and I was listening to music,” he told Cool Accidents. “I was studying it – I just love rap, I thought ‘this is what I wanna do, I wanna be a rapper.’” His hard work has paid off. In 2018, he signed to Atlantic Records and released his major-label mixtape, Loose. 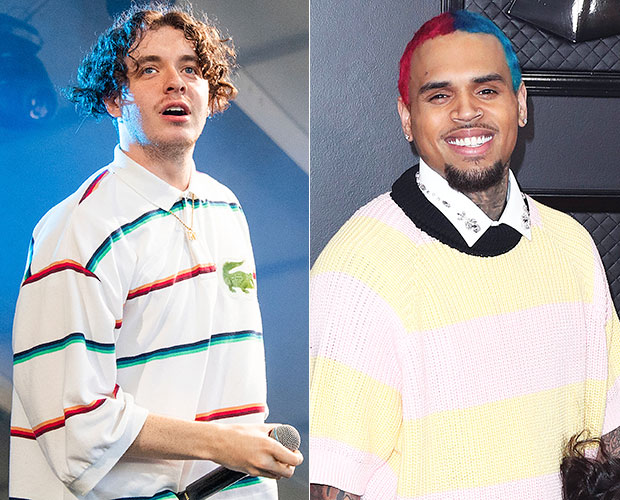 He continued to build a buzz up until his (arguable) breakthrough, “Whats Poppin.” The hit went viral on TikTok, and found success on the charts. It reached No. 2 on the Billboard Hot 100, and is currently certified triple Platinum. On top of that, Jack was part of XXL’s 2020 Freshman Class, alongside other rising stars like 24kGoldn, Baby Keem, NLE Choppa, and Chika.

“That’s the one thing about it, but I’m happy to appreciate it,” Jack said to Cool Accidents about “Whats Poppin” finding love on TikTok. “But there’s so many other things that I’m balancing when I’m writing, you know, things I want out of the music that I just haven’t thrown TikTok success in the mix. You know what I mean? There’s so many other things that I want out of music, but I mean, ideally, TikTok keeps embracing because it’s obviously powerful.”

Thats What They All Say has no apostrophes, but plenty of controversy in its features. Chris Brown brings his own baggage, from his long-documented domestic abuse with Rihanna to the lyrics of “Loyal” to his treatment of Karrueche Tran. On top of that, Jack Harlow’s album includes the “Whats Poppin” remix that features Lil Wayne and Tory Lanez. Wayne came under fire for supporting Donald Trump this year, and Tory has been charged with assault after allegedly shooting Megan Thee Stallion. When asked about including Tory on his album, Jack defended the decision. “I don’t think I’m God,” Jack told Power 106, per Complex. “I don’t have no room to judge anybody. I wasn’t there when this and that happened, I don’t know anything.” He also said there’s a “certain integrity you have to keep as an artist,” and that there are “three sides to every story.”