Every superannuation holder could end up worse off in retirement under the Coalition’s super-for-housing policy, industry funds have warned, saying the plan would force the sector to carry lower-performing assets.

Less than two days out from election day, the cost of living remains a hot-button issue after data on Wednesday showed a record gap between wages growth and inflation. 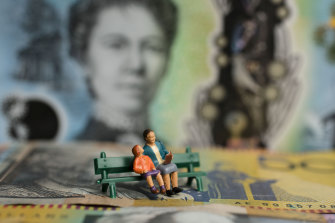 The superannuation industry says all fund holders would be worse off under the Coalition’s super-for-housing plan.Credit:Dominic Lorrimer

Both major parties have vowed to help more people get a foothold in the property market, with Labor announcing its home equity scheme earlier in the campaign, and the Coalition on Sunday unveiling its plan to allow first home buyers to withdraw up to $50,000 of their super to help with a house deposit.

Analysis of the impact of the Coalition policy from Industry Super Australia found funds would have to carry more cash, which would lead to less investment in long-term growth assets, leaving every super fund holder worse off in retirement.

Industry Super’s modelling found a 30-year-old who had $20,000 in super could end up $14,700 to $29,100 worse-off at retirement regardless of whether they used the Coalition’s housing scheme.

The need for more cash meant annual returns across investment portfolios could fall by up to 0.2 percentage points, depending on how different funds invested their assets, it said.

Industry Super chief executive Bernie Dean said Australians could be left tens of thousands of dollars worse off because of the scheme.

“Not only will throwing super into the housing market jack up prices and make houses less affordable, but all Australian workers will also be worse off because of lower investment returns,” he said. “Super is meant to be for people’s retirement, not supercharging house prices and pushing the home-ownership dream further away.”

As well as facing criticism from the super industry, Labor leader Anthony Albanese has called the Coalition policy “fiscally irresponsible” while some economists and former prime minister Malcolm Turnbull have warned it would push up property prices.

But Treasurer Josh Frydenberg says the Coalition’s housing policy is about letting people access their own money.

“Buying your first home, owning your own home is your single most important asset and it gets you on that ladder earlier by being able to, in a responsible way, access your super,” he told ABC’s RN Breakfast on Tuesday.

Superannuation has also come up during the campaign amid debate over the gap between women’s and men’s wages.

To help fix that gap in retirement, Chartered Accountants Australia and New Zealand wants both major parties to commit to a lifetime cap on superannuation contributions, rather than the current yearly cap.

The group’s superannuation leader, Tony Negline, said it would simplify the system and make it fairer for people with disrupted work patterns, particularly women.

“With lower wages comes lower super contributions, resulting in a less secure financial future,” he said. “To compound the issue, women often take more career breaks to care for family members, resulting in them earning less or no superannuation over their formative career-building years.”

Negline said the annual cap holds women back from topping up their super when they’re in a position to do so later in their careers.