Coat couture to die for! Nicole Kidman's wardrobe in The Undoing

Coat couture to die for! It’s TV’s most talked-about whodunnit – but as these pictures reveal, the real star of The Undoing isn’t Hugh Grant or Nicole Kidman… but her wardrobe

Not since Carrie Bradshaw tottered, bare-legged, along the wintry streets of Manhattan in Sex And The City has a show so ignited a desire to ‘investment dress’.

Finally, we have a new fashion heroine. Only this time, there’s no goose pimples to fear. The sight of Nicole Kidman in her toasty coats of many colours in hit drama The Undoing will surely spark a stampede to the luxury Italian makers.

I keep freezing a shot of her on a zebra crossing in a vintage green design, and ruing the day I threw out my green velvet Laura Ashley.

A member of the Manhattan private school set, she is caught up in a murder and has a lascivious husband, played by Hugh Grant with all his Bridget Jones Daniel Cleaver-ish drooling. But no one cares about that, because all the while she’s wrapped in 100 per cent wool. 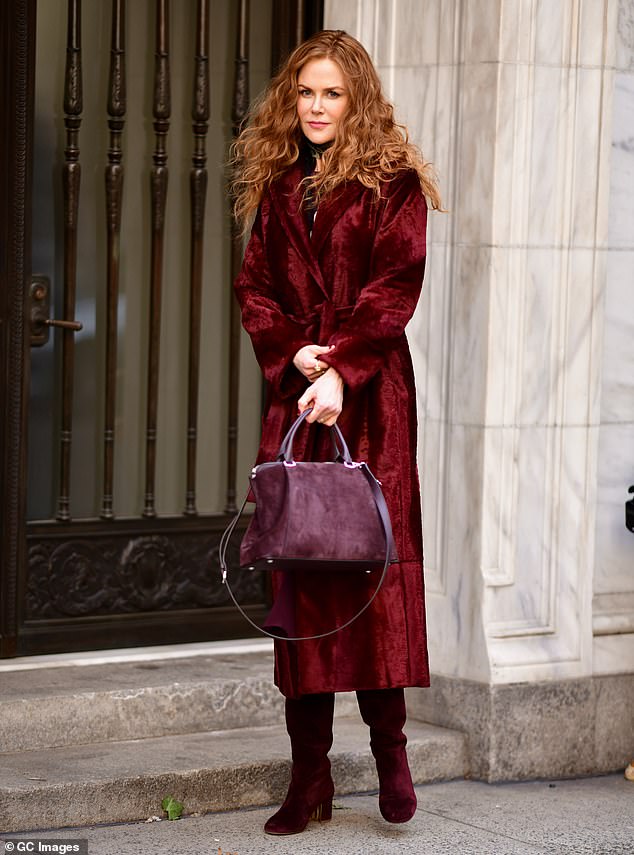 Dressing gown chic: This Max Mara coat, costing around £3,000, is almost a dressing gown, but Nicole pulls it off. It was customised to fit Nicole’s 5ft 10½in frame, and the result has us all wishing for extra inches. The red clashes with her hair, while the boots clash again.

And it’s not just the coats, but what she wears under them. After she unravelled her Etro cape to reveal a metallic Givenchy gown in episode one, the £6,775 dress sold out instantly.

She lit up the room like a disco ball. No woman watching could be impervious to that kind of magic.

Grace often teams her coats with gloves, a silk scarf, knee-high boots and a pussybow blouse. 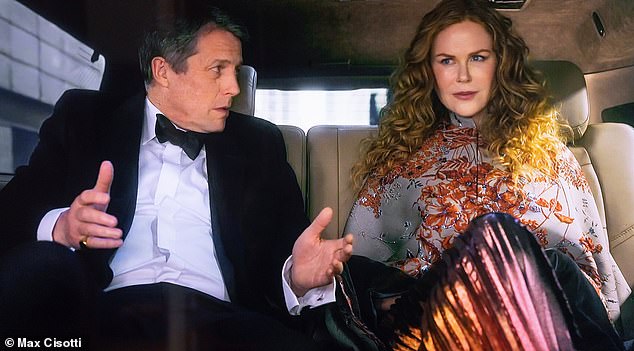 Caped-crusader with Italian flair: Just wow. This embroidered cape with a stand-up collar by Italian boho brand Etro should never, ever be removed. Back away, coat check lady! Pictured: Kidman with co-star Hugh Grant 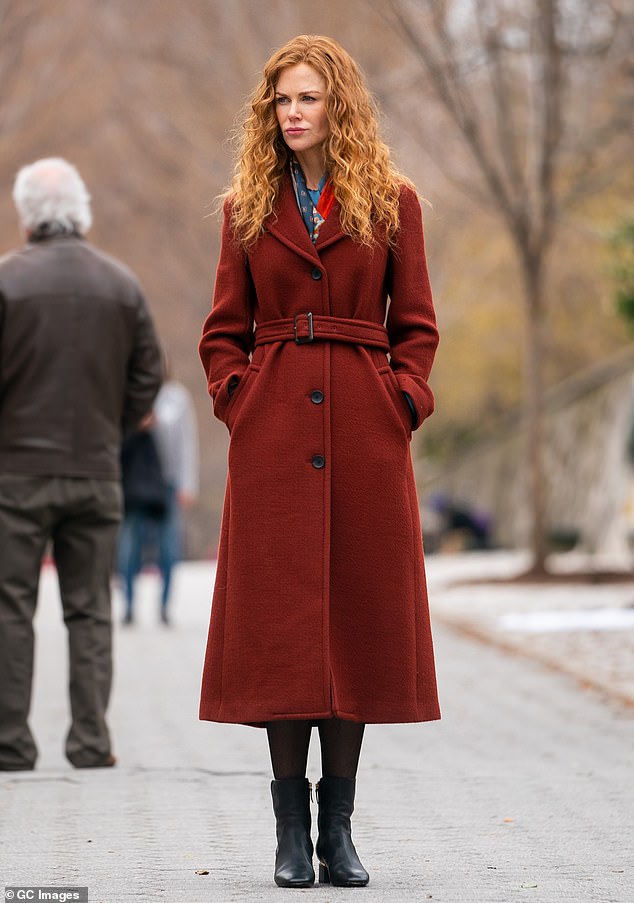 What a belter! The key to this £1,528 tailored coat from Phillip Lim is that its cut gives you a relaxed air — even if you suspect your husband is cheating on you in a hotel. Note the maxi length, and the boots, which have a chunky heel so you can cover miles. It’s better to pair this look with a silk blouse and neckerchief, rather than a sweater and wool scarf, or else you will be too hot and itchy.

This is boho chic at its best, with a 1970s attitude (remember the three-day week?) to braving the elements rarely seen in the fashion world. These outfits are sensible, practical, warm!

When it comes to the show’s brutal death, surely Grace could never have done it, thanks to that other 1970s staple: the leather pencil skirt. It squeaks as you walk, so everyone would hear you fleeing the crime scene. 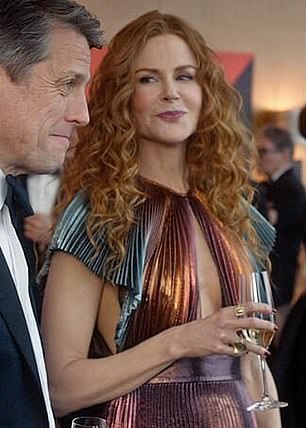 It’s not a coat, but I kept rewinding episode one’s charity fundraiser scene, just to see this £6,775 Givenchy dress, designed by Clare Waight Keller (she who gave us Meghan’s wedding dress) before she left the brand. I call this Nicole’s Quality Street look: it’s the wrapper, she’s the sweet

The woman responsible for these gems is Signe Sejlund, the Copenhagen-based costume designer who gave us the backless gowns worn by Elizabeth Debicki in BBC drama The Night Manager. Those dresses prompted Tom Hiddleston to shove her character up against a wall.

This time round, the costumes suggest a woman who doesn’t shiver on the sidewalk, waiting for a cab. She doesn’t teeter on stilettos, she strides.

She is Amazonian. She will prevail. (That isn’t a spoiler. I’ve been so fixated on the coats that I’ve barely followed the plot.)

The Undoing was filmed pre-Covid, and the garments were plucked from the autumn 2018 and resort 2019 catwalks.

In Milan, the two shows that always drew a yawn were those by Max Mara, with its camel coats, and Etro, a label for rich bohos who wear multiple rings and knock over ornaments with their sleeves.

But, after this series, I imagine next year those shows will be the hottest tickets in town.

Most of the scenes were filmed outside — oddly prescient, given that this winter the only place we’ll be seen is outdoors. And while Nicole’s character is so rich she has a coat for every occasion, you’ll need just one to emulate her look. 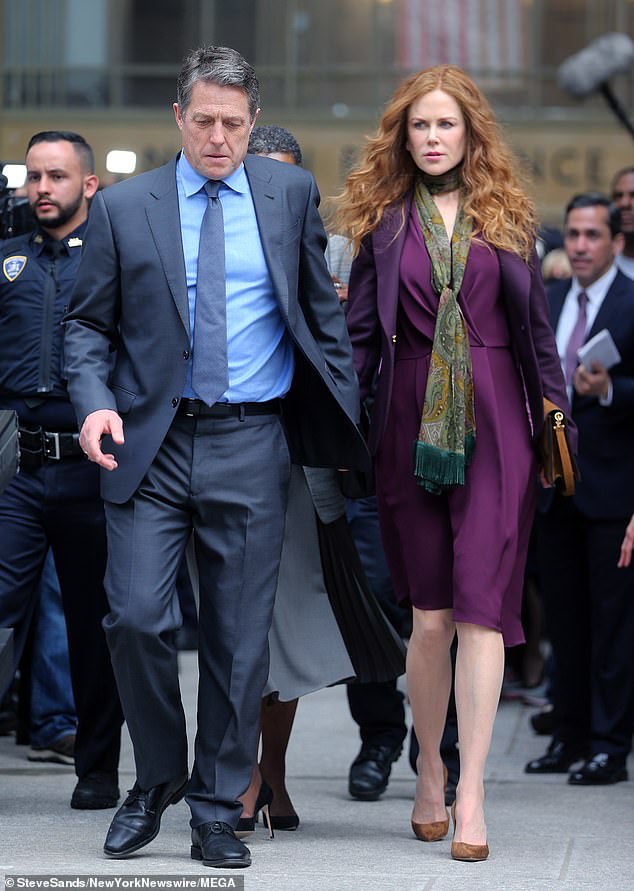 For grown-up garb, purple reigns supreme: Striding out of court in this £995 purple dress by London brand Roksanda — loved by Sam Cam et al — the character Grace looks very fluid and grown up. She is a woman, not a girl, after all. The dress makes a few appearances in the show — this time around she’s matched it with a purple jacket, £400 Etro scarf, and some rather practical tan shoes. The show must’ve exhausted the coat budget by this point 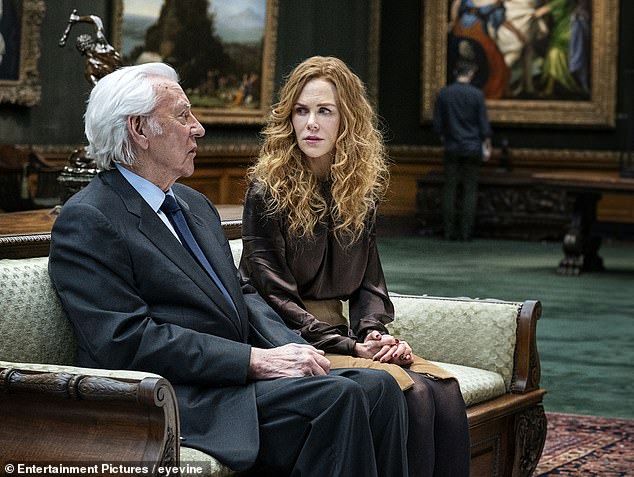 Tip-top in the ultimate wealthy woman outfit: Oh, for a feminine silk blouse. The mannish shirt is banished for ever, and in comes this £340 Vince beauty. And the suede skirt is back! This £2,550 design is by the ultimate Manhattan rich girl’s label The Row.

A £2,000 Max Mara design will last decades, but so, too, will a long-line £325 camel coat from Reiss. You can dress it up and down, unlike all those ghastly puffer jackets.

Nothing about these costumes is careless. Grace paints her nails to match her boots. Her lipstick is the same shade as her coat. Her hair (is it a wig?) either clashes crazily or is matchy-matchy.

Her coats are the best argument yet for us to end global warming — more powerful than anything that comes of the mouth of Greta Thunberg. We need frost. We need wind. We need snow. Because we need to wear these coats. 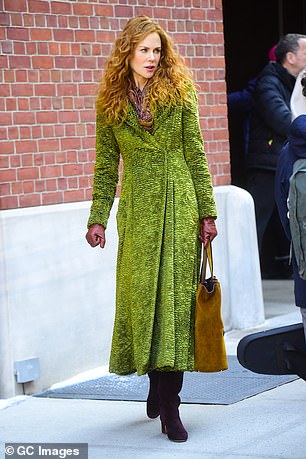 This empire-line vintage coat was created for the show by costume designer Signe Sejlund, meaning we can only wonder at its likely exorbitant cost.

But it proves it’s worth every penny by performing the miracle of giving Nicole a bust and a waist (neither of which she’s got — she has more of a pencil-shaped figure).

And although it’s velvet, it gives the textured appearance of astrakhan — a ghastly fabric made from the fur of fetal or newborn lambs.

The look is finished off with red gloves, a tan tote, an Etro paisley scarf to keep out the chill, and those purple knee-highs with a gold heel for added bling. 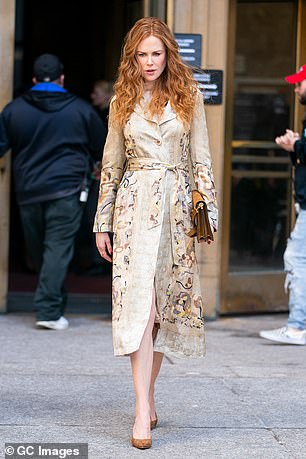 This patterned coat, believed to be a £2,800 Etro number, has echoes of Carrie Bradshaw.

But whereas Carrie was tiny, meaning she wore a princess line stopping at the knee, Nicole’s character is so willowy she can take a longer length.

The bag and shoes match and, unusually for Grace Fraser, we have a bare leg.

In another outing, she wears this design with a pistachio pussybow dress and ankle boots.

I normally can’t stand short boots with anything other than trousers, but she pulls it off. 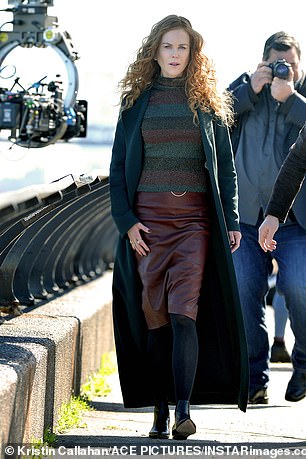 Extraordinarily, Nicole also manages to pull off woolly tights — a nasty, far-too-warm item I thought died out in 1998.

Her flat bootie somehow looks right, too, when it’s oh so wrong!

This Max Mara coat, costing around £3,000, is almost a dressing gown, but Nicole pulls it off.

It was customised to fit Nicole’s 5ft 10½in frame, and the result has us all wishing for extra inches.

The red clashes with her hair, while the boots clash again.