A woman has shared video of the horrifying moment she caught a man using his cellphone to secretly try to film her undressing in a changing room.

US-based TikTok user Macey Leap, who is known as @maceyl7 on the app, has gone viral with her warning video, which has been viewed more than 16.3 million times since it was posted last week.

Macey, a junior at a college in the south, was trying on clothes at Forever 21 when she noticed someone standing in the dressing room next to hers, with the front of his sneakers poking past the divider. 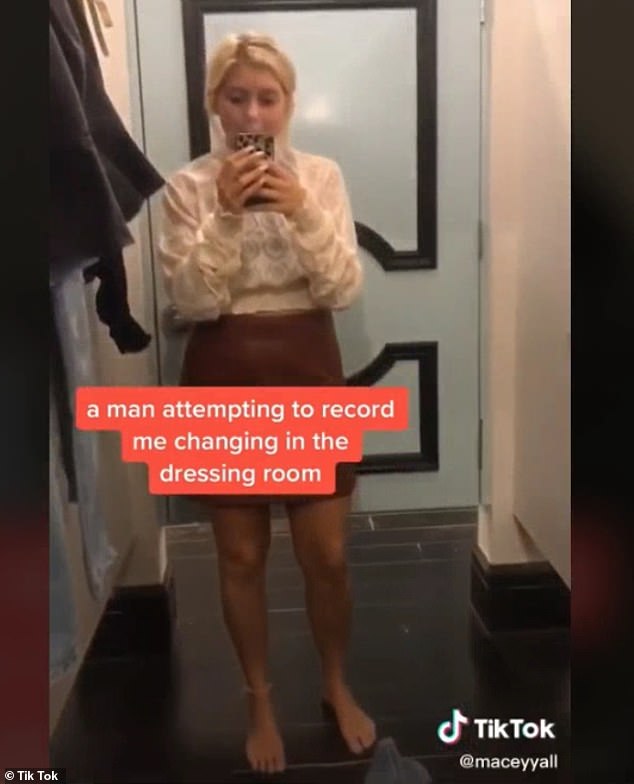 Scary: Macey Leap, who is known as @maceyl7 on the platform, took to TikTok to share a video of a man trying to secretly film her undressing while inside the changing room next to hers

In the video, she zooms in on the stranger’s shoes to show that he has his cellphone between his feet with the camera angled in her direction. 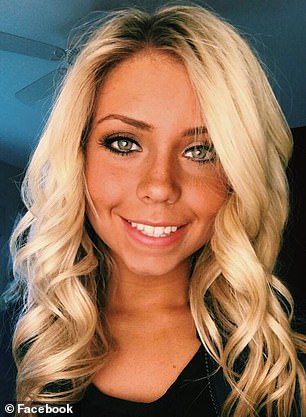 IRL: Macey, a junior in college, has insisted that the terrifying moment wasn’t staged

It appears as though he was trying to inconspicuously film her as she tried on clothes, but he may not have realized that he was also being filmed.

‘A man attempting to record me changing in the dressing room,’ she captioned the disturbing video, adding: ‘Be safe out there.’

The clip is still on TikTok, but a follow-up by Macey alluded to it being temporarily removed for violating community guidelines.

She has also disabled the comments after being accused of ‘staging’ the scary moment, which she firmly denies, prompting people to reach out to her in other posts.

‘I had a guy film me in a changing room when I was 16, it’s an awful feeling, sorry that u had to go through that,’ one person commented on an unrelated video.

‘I’m sorry you had to go through that too, it’s terrible how some of us women have to live with these fears when we go out in public places,’ another added.

Macey ended up responding to the women and explaining why she disabled the comments on her viral video.

‘The video is NOT staged at all. I turned off the comments because people can be VERY MEAN and my mental health cannot take that! So thanks!’ she wrote.

It’s unclear what happened to the man, if anything at all.

The alarming footage has since been posted on Reddit, where many were appalled by what they were seeing.

‘F**king creepy,’ one person wrote, while another commented: ‘Oh my god please tell me they arrested his perverted a**. PLEASE.’

‘I used to work retail. These creeps watch the reflection off the dark floor in order to watch you change,’ someone else shared.