A couple have been branded ‘self-centered’ and ‘deluded’ after asking strangers to donate towards their wedding and honeymoon amid the coronavirus pandemic.

In a post shared to Reddit’s Wedding Shaming forum, the anonymous couple, who are believed to be from the UK, asked for people to fund their ‘traditional and modern’ wedding – along with their honeymoon in either Peru, Dubai, Japan, Turkey or Egypt.

While the bride, who is a musician, offered to write an original song to express her gratitude to well-wishers, many angered forum users were quick to take to the comments section, slamming the couple for being ‘tacky.’

‘Wow I’d like to go to those places too! Where’s my money? This would be tacky any time but especially now,’ wrote one, while a second penned: ‘People who think they DESERVE a nice wedding or honeymoon are deluded.’ 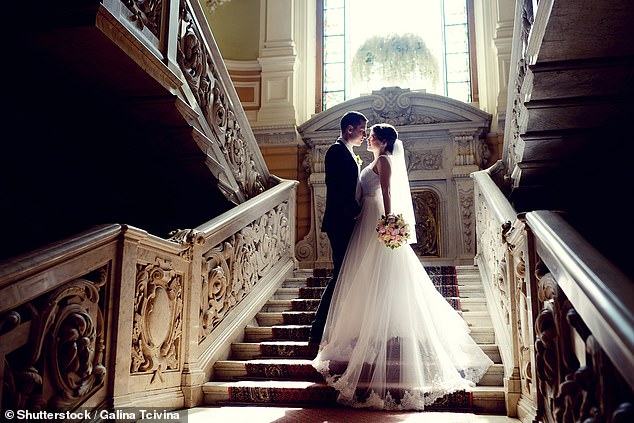 A couple, believed to be from the UK, have been branded ‘deluded’ after a Reddit thread revealed they asked strangers to fund their ‘dream wedding’ and honeymoon amid the coronavirus pandemic. Pictured, stock image

In the initial post, the couple began: ‘We are planning our wedding to take place in September. Unfortunately we are both fighting chronic illness and try to stay above water during the Covid-19 crisis.

‘This wedding is supposed to be all traditional / modern wedding but our dreams have been narrowed down because of our chronic illness and medical costs.’

The duo then decided to take things a step further by discussing their dream honeymoon plans, that are yet to be decided.

It read: ‘We also have dreams for our honeymoon with locations like: Peru, Dubai, Turkey, Egypt and Japan. If only we could do 1 of those locations we would see this as our dream fulfilled.’ 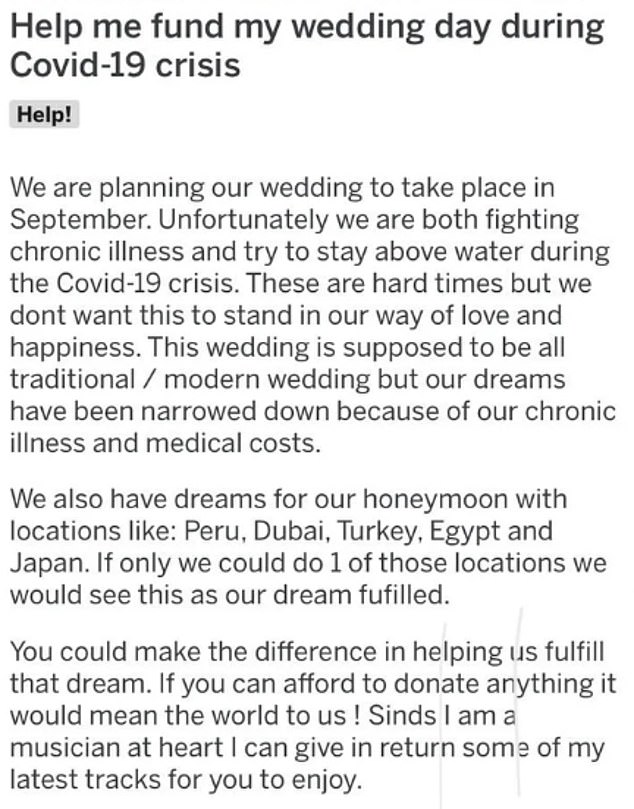 ‘You could make the difference in helping us fulfill that dream. If you can afford to donate anything it would mean the world to us!

‘[Since] I am a musician at heart I can give in return some of my latest tracks for you to enjoy.’

However, rather than taking to their purses to donate, many were left outraged by the mere suggestion of helping – with some bride’s admitting they couldn’t even afford their own honeymoon, so went without.

‘My husband and I couldn’t afford a fancy honeymoon,’ wrote one. ‘We used a cabin a family member loaned to us and we were grateful for that.

‘I am astounded how many people ask for money to fund the honeymoon. If you can’t afford it, maybe the money you’re given as a present should be put into things other than a holiday.’

Some outraged forum users were quick to reveal that they couldn’t afford a honeymoon, so went without (pictured)

A second commented: ‘My husband and I didn’t go on a honeymoon because we couldn’t afford it and couldn’t get the time off work. We never would have asked people to pay for our holiday. Who the hell do they think are?’ while a fourth agreed:

‘If someone GIFTS them money for their honeymoon without being asked, that’s great, but to ask for it is very tacky and tone deaf.

‘Particularly since many folks are struggling with their own issues that actually ARE related to COVID-19.’

Meanwhile, a further wrote: ‘I’ve never understood why people think their dream wedding or honeymoon is something any stranger cares about,’ to which another replied: ‘Because they’re self centered enough to think they’re celebrities.’

One person wrote: ‘People who think they DESERVE a nice wedding or honeymoon are deluded’ (pictured)